Michael Spain,
born 15 Oct 1881.
His father died Dec 1900.
He is listed as "M.A. Spain", living Crescent View, Military Rd, Limerick, at father's death 1900.
He is listed in [Census, 31 Mar 1901] as the 19 year old head of the household at Military Rd, Limerick. His father dead. This is only days before his mother's death. His younger brothers are there but his mother is not (she would be in Dublin). He is "provision merchant". They have two domestic servants living with them.
Listed as "M.C. Spain, Limerick" at grandfather's funeral, 1 Apr 1901.
His mother died 8 April 1901. He was orphaned.
He took over father's business on Roches St, Limerick.
He sold Crescent View 1901-02.
He is listed as merchant, Roches St, at mar 1909.
Michael mar 24 Nov 1909 to Kathleen O'Donnell [Kate, born 6 Mar 1884, 58 William St, Limerick].
See her birth cert from here.
She was dau of Bryan O'Donnell, merchant, J.P., and Parnellite Lord Mayor of Limerick 1893 to 1895.
Bryan O'Donnell ran a business at 58 William St, Limerick.
He knew Michael's father and sent a tribute at his funeral in 1900.
The O'Donnells lived at Ballyclough House, Ballyclough, S of Limerick city (see map).
See them listed in 1901 census at Ballyclough House.
Kathleen is listed as of William St, Limerick, at mar.
Michael and Kathleen mar at St.Michael's RC church, Limerick. See mar cert from here.
Mar wit by Andrew Spain and Ethel O'Donnell. 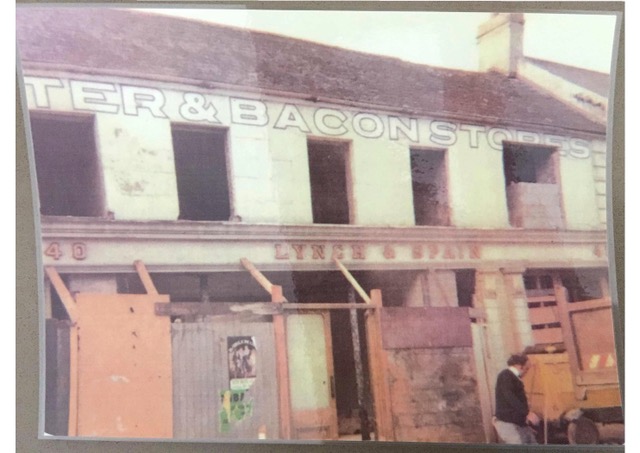 Location of Crescent View, among the villas off the Military Road, running SW out of Limerick.
Including Summerville.
From 1829 to 1842 map.

The location on the 1887 to 1913 map.
It is unclear if Crescent View is gone or is part of Mount St. Vincent Convent.
This site is now part of Mary Immaculate College.
See modern map.