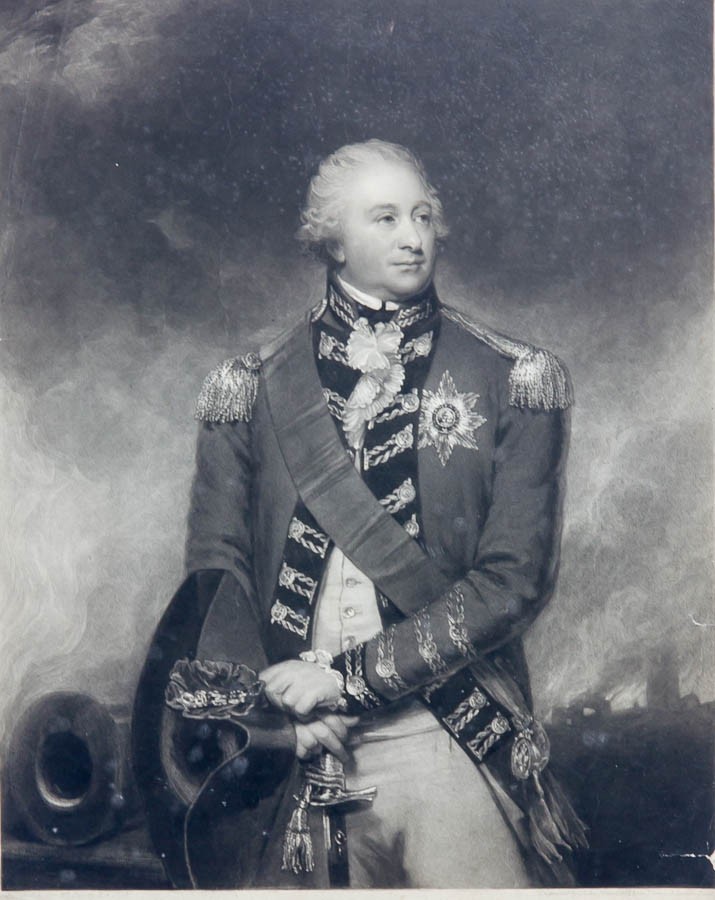 He mar 12 Feb 1770 to Kitty Hunter [born 24 Apr 1740]. No issue.
She already had two illegitimate sons by two different fathers, both of them Earls.
He became Major of 54th Regiment of Foot 1771.
A letter survives in Denbighshire Record Office, written by Alured to a Clarke relative, 1775, from Charles Fort, Kinsale, Ireland. He is about to be posted to North America. Kitty going with him. (This was the American Revolutionary War 1775 to 1783).
Alured became Lieutenant-Colonel of the 7th Regiment of Foot 1777.
By 1778 Kitty was back in Europe, staying with her sister Mary Henrietta at Ravensdale Park, Co.Louth. Alured stayed in North America.
Kitty's son Augustus Reebkomp served with Royal Navy in America 1779-83.
A letter of 14 Sept 1779 [PP, vol.1, p.248] says Kitty is "very ill at Bristol".
Letter of 30 Oct 1780 [PP, vol.2, p.61] says she is in Ireland (would be with her sister).
Alured took charge of all British troops in Georgia in 1780.
He became Colonel of the 7th Regiment of Foot in 1782.
American Revolutionary War ended 1783.

Kitty dies, 1795:
She died 18 Aug 1795 [burial record], age 55 yrs, at Buxton, Derbyshire (a spa town).
[The Star, London, 3 Sept 1795] says: "Tuesday, the 18th last, at Buxton, where she went for the recovery of her health, Mrs. Clarke, the Lady of General Clarke, now in the East-India service."
[The Oracle and Public Advertiser, London, 5 Sept 1795] says: "On the 18th of last month, at Buxton, Mrs. Clarke, the Lady of Major General Alured Clarke, lately appointed Governor of Madras."
She was bur at St.George's Hanover Square, London (where her stepmother was buried). See burial register, entry 207.
The burial ground of St.George's Hanover Square was not at the church but rather some distance away at the NE side of Hyde Park.
The burial ground has since been cleared.

There is a Deed of gift from him, dated 17 June 1822, to the surviving family of his stepson Augustus Montgomery. He seems to be giving a large sum to the family. See p.3 bottom: "the said transfers of the said stocks were so made by the said Sir Alured Clarke from the regard he had for the said late Captain Augustus Montgomery and now hath for his family".
Field Marshal: He finally rose to become Field Marshal Sir Alured Clarke 1830 (highest military rank of the UK).
Listed as of Mansfield Street, London, at death.

Alured dies, 1832:
He died 16 Sept 1832, at Llangollen vicarage, Denbighshire, NE Wales (some distance to the S of Rhual), age 87 yrs.
He was bur 22 Sept 1832 [church burial register] at St.Mary's church, off High St, Mold (see map and street view).
He was bur in the Rhual vault beside church. Grave now gone, was cleared along with other graves in 1950s. Memorial to him survives inside church.
His will pr 26 October 1832, Prerogative Court of Canterbury. 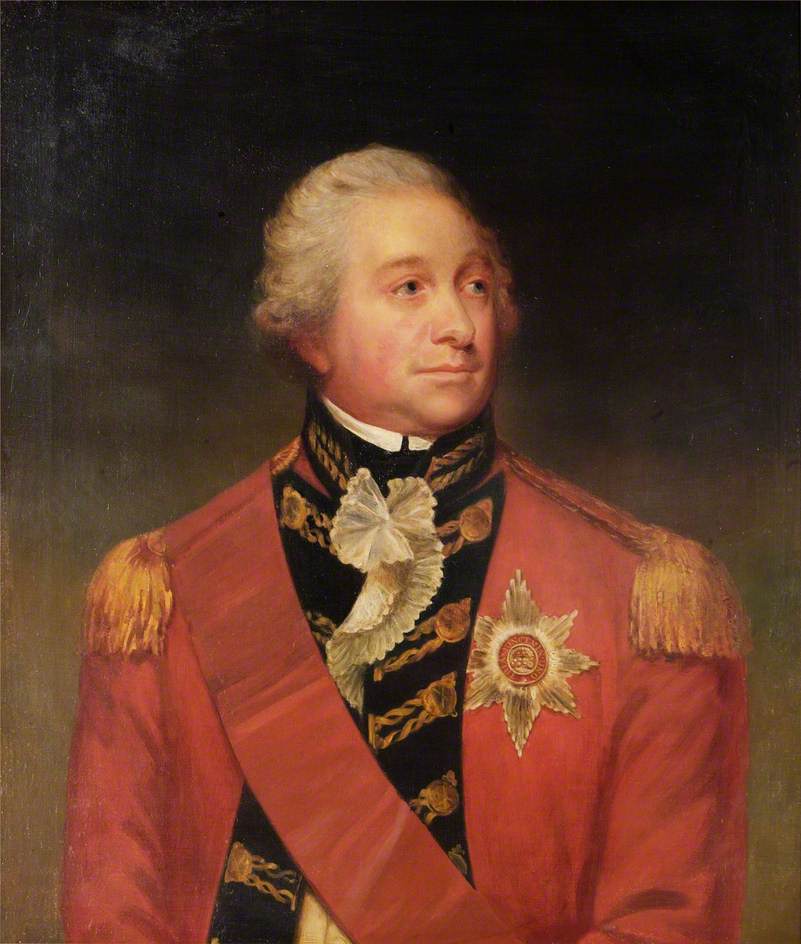 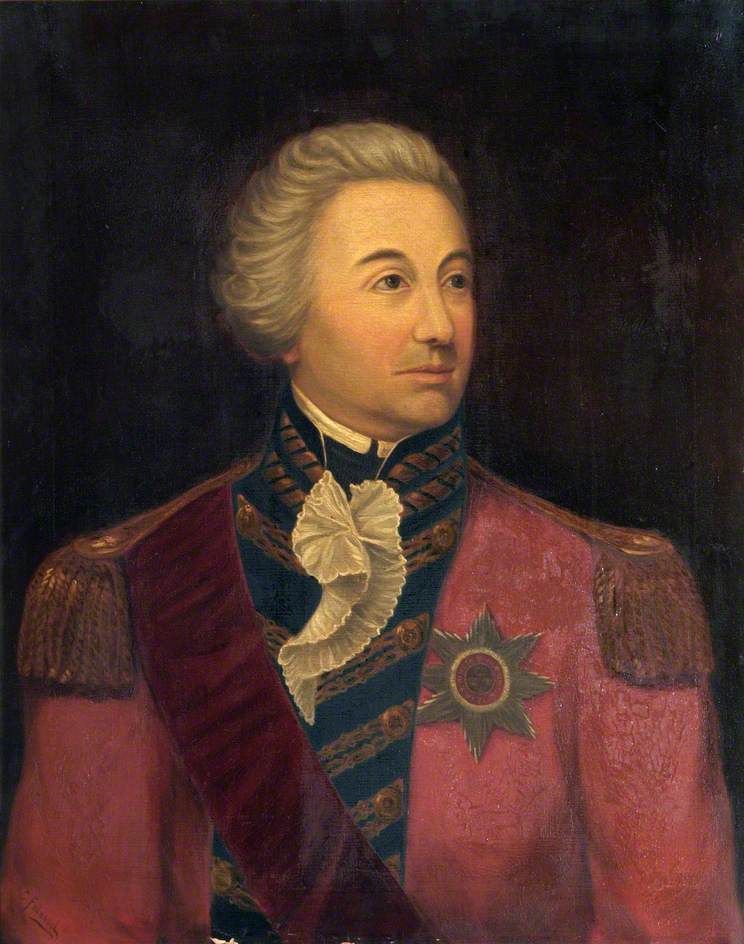 Sir Alured Clarke listed as the most senior General in the Army in [Treble Almanac 1829, p.141].
Still linked to the 7th Regiment of Foot.

Kitty Hunter was bur 1795 at the burial ground of St.George's Hanover Square, London.
The burial ground was not at the church but rather some distance away at the NE side of Hyde Park.

St George's church, Hanover Square, London (black building, E side of George St).
From section of 1827 map.
This was in a built-up area and the burial ground was elsewhere.
The church is still there. See modern street view.

The burial ground (from 1765 to 1854) of St George's church, Hanover Square.
At the NE side of Hyde Park.
From section of 1827 map.
This is where Kitty Hunter was buried.

The disused burial ground on 1938 map.