The site of John Kickham's house, Fethard St, Mullinahone.
Though this is apparently a new building built in 1902.

John Kickham,
said to be born pre-1791, but more likely born c.1805.
He is described as of Mullinahone, Co.Tipperary, at mar.
He mar 1827 to Anne Mahony [Nancy, of near Cashel, Co.Tipperary].
Anne is apparently described in her son's novel Sally Cavanagh.
Their son Charles was born 1828 at the Mahony house near Cashel. They are listed as of "Cashel" at bapt.
Settled back in Mullinahone.
He had a shop in Fethard St, Mullinahone, Co.Tipperary.
His main business was a drapery. He was very successful in business.
He was active in struggle for Catholic Emancipation (achieved 1829) and for Repeal.
He addressed a number of anti-tithe gatherings in 1830s.
There is an unidentified John Kickham listed in [Tithe Survey, 1834] as holding 3 acres at Bawnavrona, Kilvemnon par.
Listed at Mullinahone at son's bapt 1836.
John was a supporter of Young Irelanders in 1840s.
"John Kickham" is listed in [House Book for Mullinahone, 1846] at plot 14, Callan St (now Kickham St), Mullinahone.

Death report says Kickham "repeatedly served on our county Grand Juries at Quarter Sessions".
[Deed, 1855] relates to the property currently in possession of John Kickham, bounded on E by Fethard St, i.e. plot 2, Fethard St. He is described as John Kickham, of Mullinahone, shopkeeper.
[Deed, 1860] refers to [Deed, 1855], and also relates to various other people's properties in and around Mullinahone, including the property just N of "James Kickham's house and premises" on Killaghy St.
Death report says still running drapery business at death 1861.

John dies by suicide or accident, 1861:
He died in his house in Mullinahone, evening of Fri 2 Aug 1861, by a gunshot wound when alone in his room. Death report says he was age over 70 yrs.
The inquest considers suicide but decides it was maybe an accident.
He had been depressed and often got his gun out. But he was also suffering from delusions and imagined the house was infested with rats. It was suggested he may have been shooting at these imaginary rats and shot himself by accident. Another suggestion is it was the way he placed his gun in his room, that it went off when he opened the door.
He was bur Sun 4 Aug 1861, Kickham grave, Mullinahone.
See report in Nenagh Guardian, August 7, 1861.
See Kilkenny Journal, Wed 7 Aug 1861 [NLI].
See report in Freemans Journal, August 8, 1861. This gets the name of his (not yet famous) son wrong.
See report in Kerry Star, August 10, 1861. This is actually old, undated news. Also gets his name wrong.
See report in Munster Express, August 17, 1861.
John and Anne had issue:

Baptism of Charles Joseph Kickham, the Fenian, 5 May 1828 [Cashel RC par records].
Entry is hard to find because there are multiple lists. 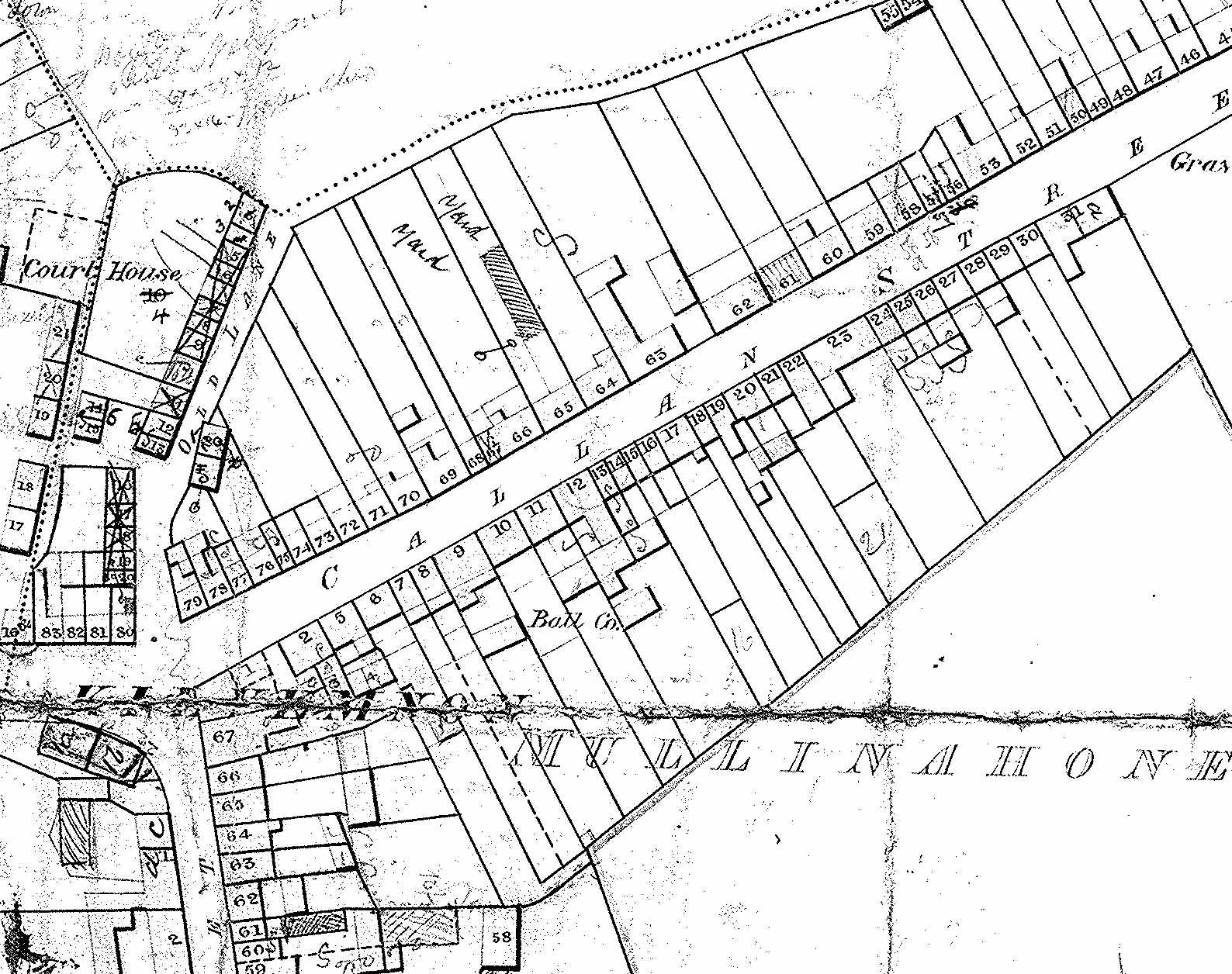 This house is numbered 14 Callan St (now Kickham St), Mullinahone.
It is at approximately the same position as plot 14 in [Griffiths Valuation], and probably is the same site.
Photo 2008. See full size.
See street view.