Ellen Nolan,
born 1802 or 1803.
She mar 1stly to --- O'Brien and had issue.
O'Brien died before 1828 (when Ellen re-married).
Ellen definitely married an O'Brien who died before 1828. The question is which O'Brien.
He is probably Kennedy O'Brien of Dunmoylan, Dunmoylan par, some distance SE of Shanagolden, who was killed in the faction fight on 2 June 1825.
The Nolan family told the story (see below) that the faction fighter Kennedy O'Brien eloped with James Nolan's daughter.
Kennedy O'Brien died 1825, and is bur Kilbradran graveyard, some way SE of Shanagolden.

Evidence that Ellen lived at Dunmoylan before her marriage to Mangan is that her marriage to Mangan is from Kilcolman, S of Dunmoylan (see map). Her children by Mangan are later baptised at Kilcolman. Later it is definite that she and Mangan are living Dunmoylan.
Ellen is listed in Latin as "Helenam O'Brien" (Ellen O'Brien) at 2nd mar.
Her 2nd husband Denis Mangan is later found at Dunmoylan though probably he only came there through marriage to her.
Ellen had issue by 1st husband (probably Kennedy O'Brien who died 1825):

See entry in Kilcolman and Coolcappa RC par records, Co.Limerick.
The mar was wit by James Nolan and Catherine Nolan. 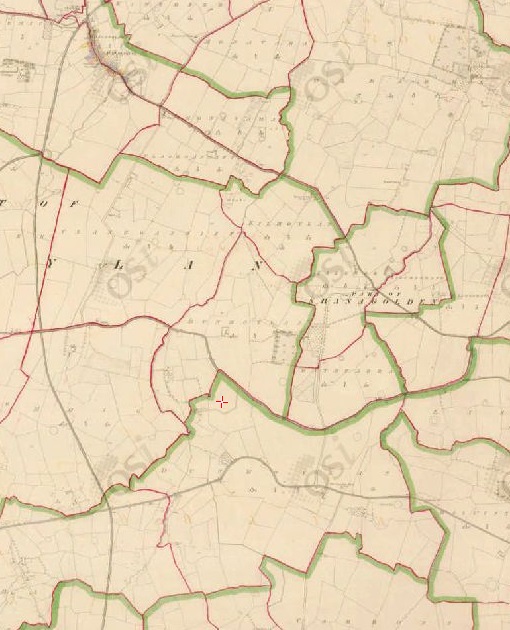 Dunmoylan (the two areas above and below the red cross) on 1829 to 1842 map.
Shanagolden town visible to the NW.

The question is whether Ellen's 1st husband is Kennedy O'Brien of Dunmoylan or not. It seems almost certain he is.

Kitty Madigan (born 1901) told a Nolan family story of the time of the great faction fight at Shanagolden between the O'Briens and the Sheahans. This was in 1825. The leader of the O'Briens was Kennedy O'Brien of Dunmoylan.

The Nolan family story was that Kennedy O'Brien was in love with James Nolan's daughter (and she with him). But her parents objected.
[Donovan, 2010] says: "both her father James and her mother strongly objected to their daughter marrying beneath her "station"."
In fact, an 1825 report quoted in [O'Donnell, 1975] describes Kennedy O'Brien as "a wealthy farmer". So the objection is more likely because he was a faction fighter.

Tim Donovan in [Donovan, 2010] names "Mary" as the daughter, and says that the parents "refused permission for the young man to even meet their daughter Mary or to enter the Nolan household. However, the lovers planned carefully and on a night of a full moon, Kennedy O'Brien rode his horse directly into the Nolan kitchen, .." [the large kitchen at Waterpark House had an arched doorway leading to the yard at the back] ".. grabbed Mary and rode off in spite of protest from her startled parents."
Tim Donovan now thinks "Mary" was just speculation, and finds the evidence that it was Ellen convincing. There was a daughter Mary, who married 1831 to Daniel Donovan. But there is no evidence it was her.

It seems almost certain that the story is true and the daughter was Ellen. Reasons:

It seems almost certain that Ellen's 1st husband was Kennedy O'Brien, and therefore we, who descend from Ellen's 2nd marriage, owe our existence to the death of Kennedy O'Brien in the faction fight on 2 June 1825.

The big faction fight at Shanagolden was on Thur 2 June 1825. It was a fight between the O'Briens and McMahons on one side, and the Sheahans and Griffins on the other.
The leader of the O'Brien side was Kennedy O'Brien of Dunmoylan (whose brothers are listed as Conor O'Brien and Denis O'Brien and Patrick O'Brien).
The leader of the Sheahan side was John Sheahan.
In the fight, about 500 men fought - about 200 on the O'Brien side versus about 300 on the Sheahan side.
Many were injured and the two leaders, Kennedy O'Brien and John Sheahan, both died.

Tim Donovan says the story goes that after the fight, one of the leaders (maybe O'Brien) was not dead.
He was lying injured, and a tinker woman, who held some grudge against him, came up to him and said: "Are ye not dead yet?" and hurled a rock into his stomach, and it was this that finally killed him.

Trial after the faction fight of 1825.
From Limerick Chronicle, Wednesday 3rd August 1825.

Fight scene from the movie Gangs of New York showing an Irish gang fighting in New York in 1846.
Probably gives some idea of what the Irish 1825 faction fighting was like.

Silhouettes (drawings) dated 1840 survive of Ellen Nolan's children by her 1st marriage to O'Brien.
On the back these are described as "step sister and brother of mother".
This was written by Anno and these are step-sister and step-brother of her mother Ellen Mangan. 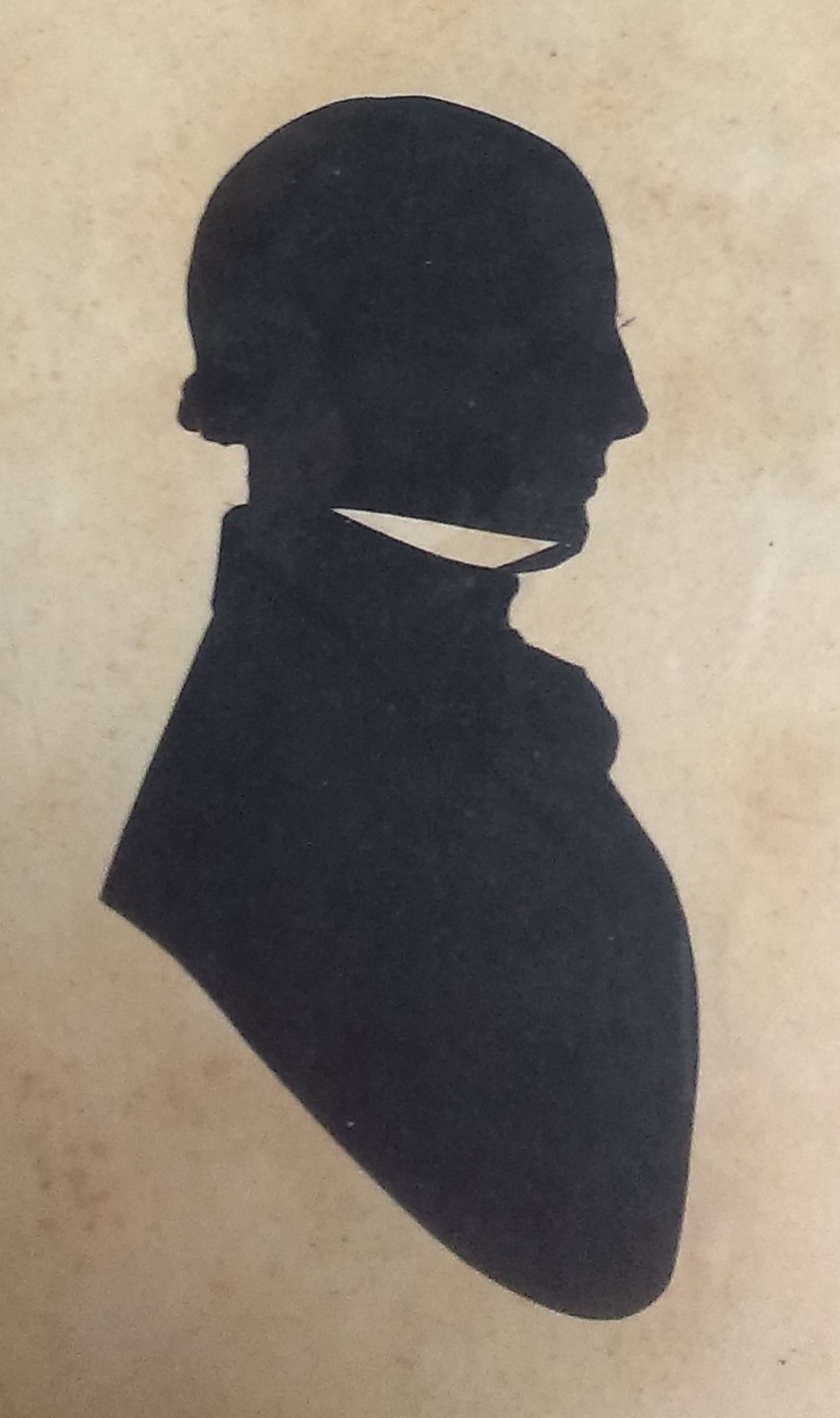 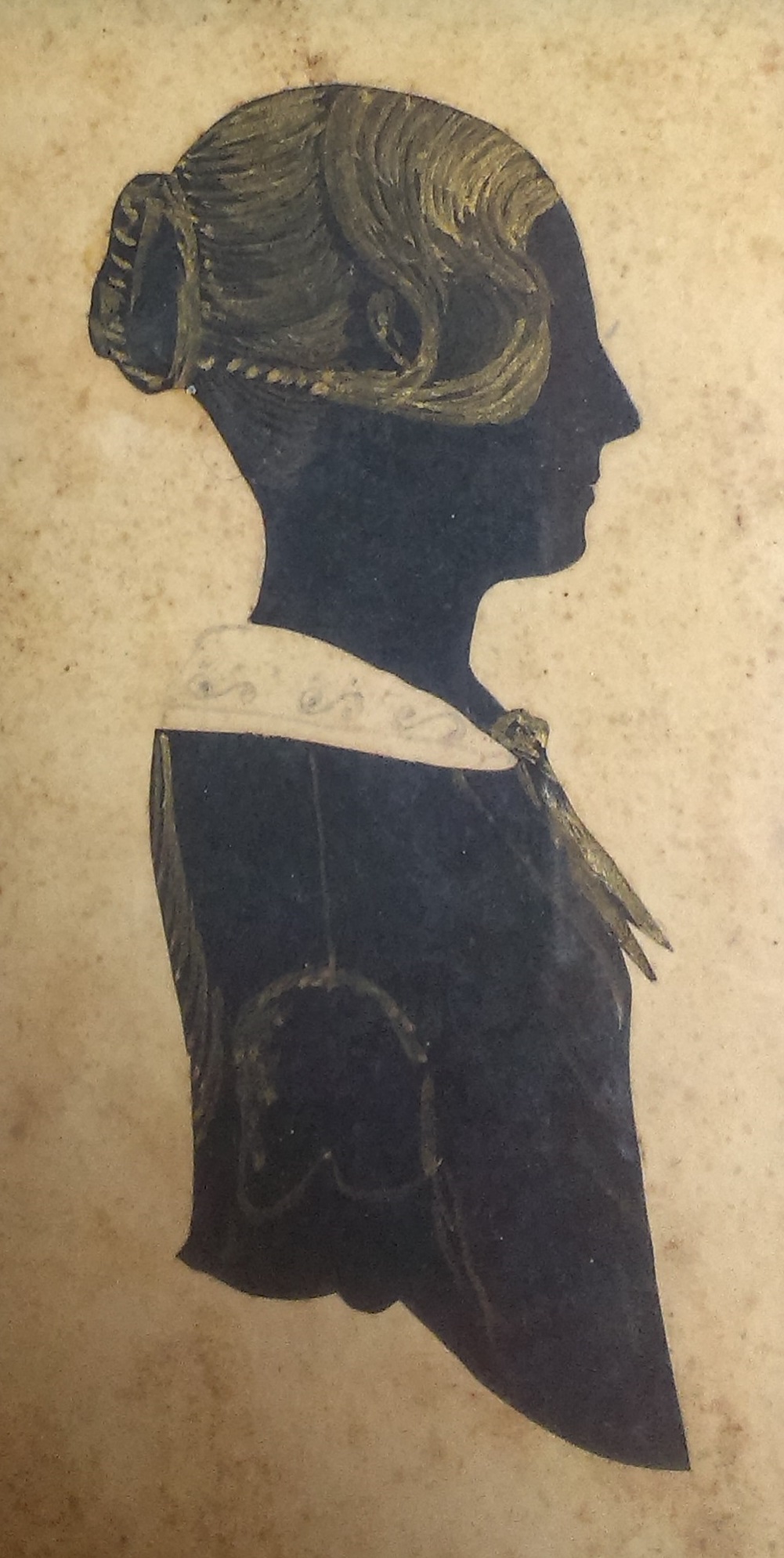 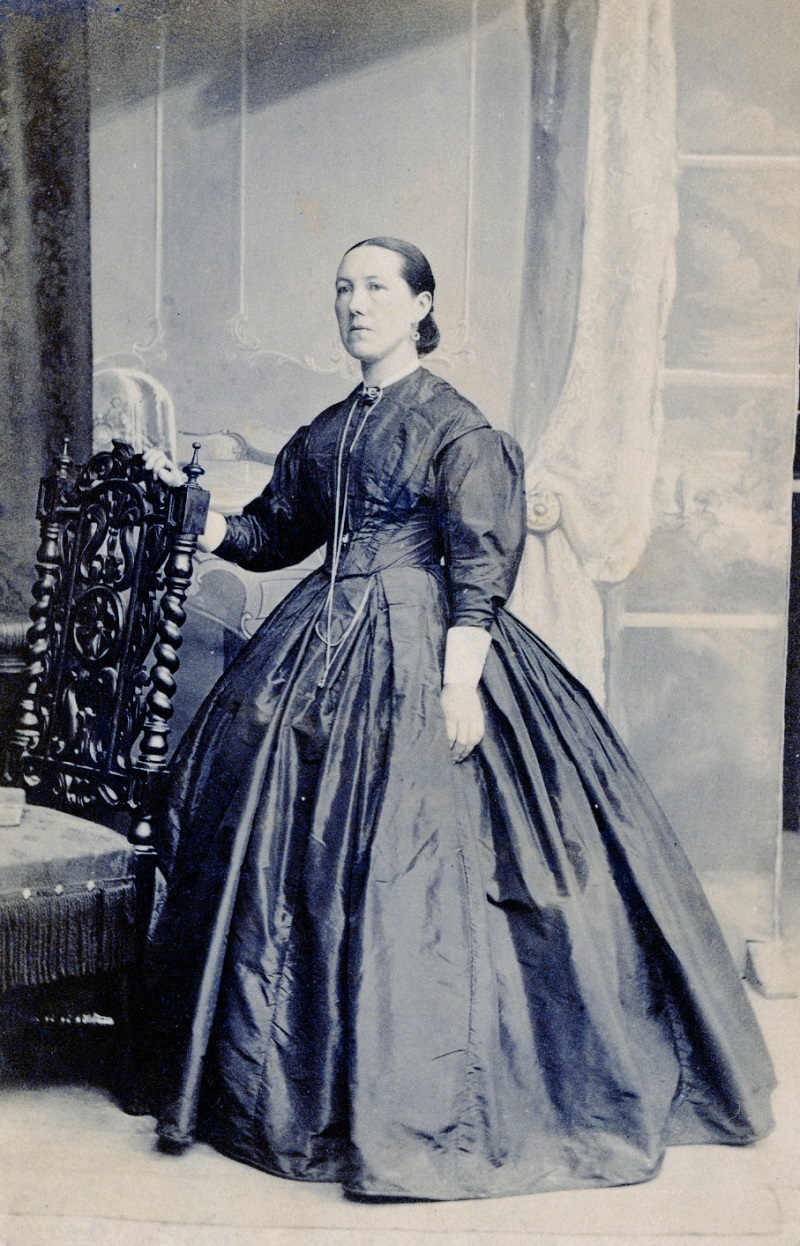 Could this be Kate O'Brien around the 1860s?
This is [P106/1669(2)]. See larger and full size.
It is grouped with a probable picture of her half-sister Ellen Mangan.
The P106 catalogue groups both of them with some old O'Donoghue photos, but that seems unlikely. The other picture looks like Ellen Mangan.
This is an older woman. It cannot be one of Ellen's Mangan sisters, who were considerably younger than her. But it seems too young to be her mother. Most likely it is her half-sister Kate O'Brien.