Peter O'Mara,
or Peter Meara.
Farmer on W side of Clonmel, Co.Tipperary.
John and Andrew and James all had sons called Peter, after the grandfather.
Spelling: The family story is that the family name was once spelled "O'Meara" and changed to "O'Mara".
This seems likely. Peter is written "Peter Meara" in [Tithe Survey, 1826] and at bapt of children 1817. He is "Peter Mara" at bapt of child 1826.
Later, his wife is "O'Mara" on her grave and in burial record.
The story was that it was James who changed the name.
This seems false. John and Andrew and their families use "O'Mara" in almost all records. Though Andrew is "Andrew Meara" at mar.
If it did change to "O'Mara" it changed earlier than James.
Because Peter's wife has "O'Mara" on her grave, we will give him that spelling. But he may have started out as "O'Meara" or "Meara".
We will name family members "O'Mara" unless evidence emerges otherwise.

Peter and Margaret's sons were baptised in Clonmel town in 1817.
Peter is described as "farmer" at his son John's marriage.
He would be "Peter Meara" who is listed in [Tithe Survey, 1826] as holding a tiny plot of 1 acre at Abbey or Inishlounaght townland, Inishlounaght par, just W of Clonmel. This is close enough to town that children would still be baptised in town even if they lived here.
Child baptised in Clonmel town in 1826.
Andrew moved to Limerick city by 1837.
James moved to Limerick city by 1839.
John moved to England by 1842.

Margaret dies in Limerick, 1863:
Margaret's burial record says that at her death in 1863 she was living Roches St, Limerick, She would be living with her son James, with other son Andrew nearby.
She died 23 Sept 1863, age 78 yrs [grave] or (less likely) age 84 [burial record].
She was bur 24 Sept 1863 [burial record] in Lynch / O'Mara grave at Mount St. Lawrence cemetery, Limerick.
Grave erected by "James O'Mara", father of Bridget Cusack (died 1870), "in memory of his mother".
She is spelt "Margaret O'Mara" on grave and in burial record.
Peter and Margaret had issue:

The old St. Mary's RC church, Irishtown, Clonmel, Co.Tipperary.
Where the O'Mara children were baptised.
From 1829 to 1842 map.
The old RC church was replaced with a new RC church built in 1850 on the same site.
See modern street view. 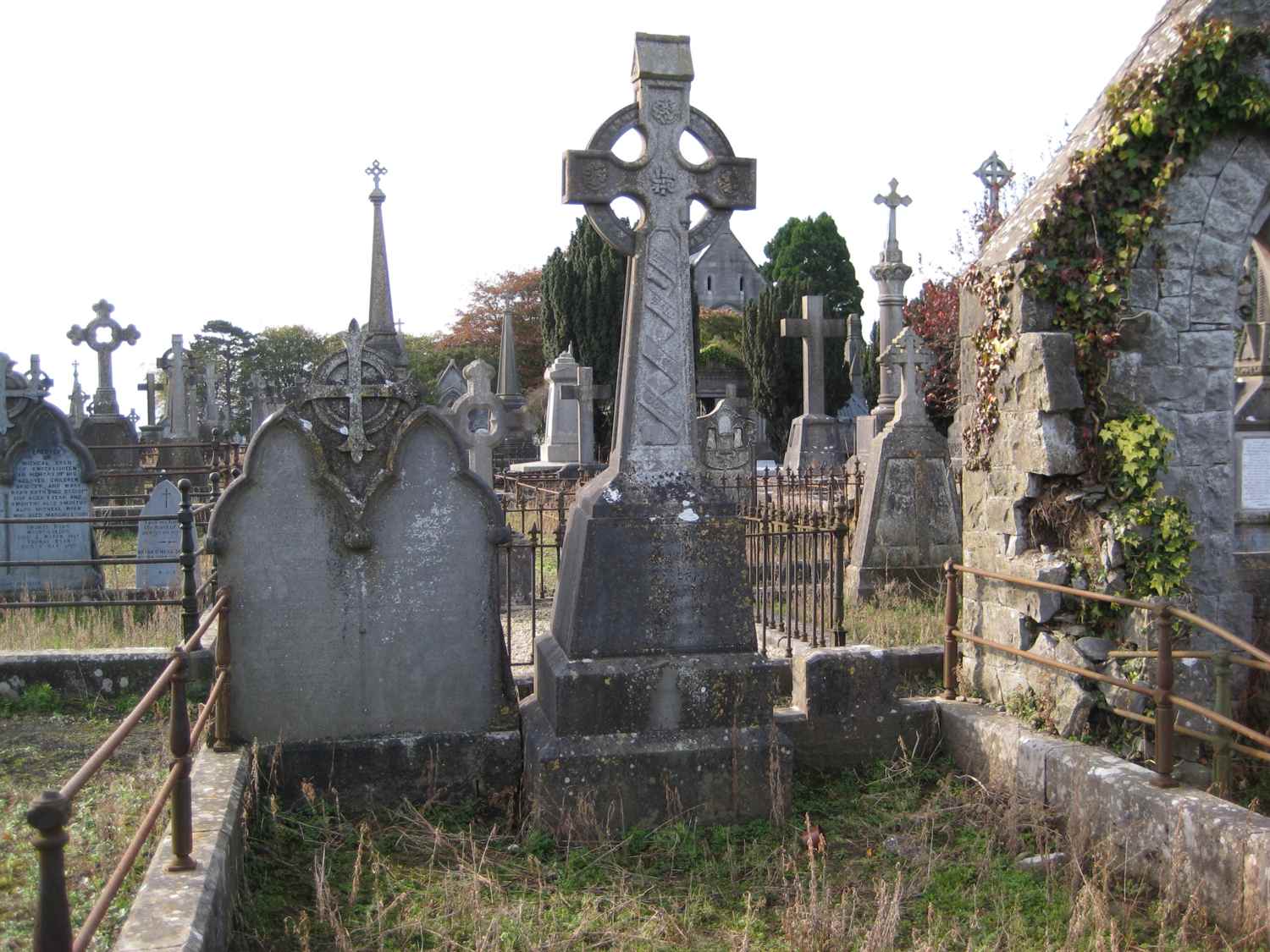 Close-up of grave of "Margaret O'Mara" shows her with that spelling.
Photo 2009. See larger and full size.

Patricia Lavelle in [PAT/1, p.5] says that one of the brothers (she thinks Andrew) joined the Queen's Life Guard in London.
Also called the Queen's Guard, a "lifeguardsman", guard of the Royal residences. He was in Queen Victoria's bodyguard.
He was said to have fallen out with his brother James (an active Home Ruler) over Irish politics.

But this biography does not fit Andrew, who lived in Limerick, and later went to North America, and stayed in contact with James' family.
Maybe this is Frank or another brother.

[PAT/32] thought Andy the lifeguardsman might be a Foley not an O'Mara.

Patricia Lavelle in [PAT/1, p.5] says that Andrew joined the Queen's Life Guard and lost contact with his brothers.
Since Andrew clearly did not lose contact, maybe this is Frank or another brother.

The online microfilm for St. Mary's RC church, Clonmel, for this period is largely illegible.
The other O'Mara baptisms may be hidden in the illegible entries.
(todo) See original paper register.

This may be another child: