Dick and Eithne on their joint passport, 1929.

Like the rest of his family, he continued as a nationalist activist.
Desmond Fitzgerald wrote 7 Jan 1919 from Gloucester Prison to "Mr. Humphreys", thanking his election workers in Pembroke (Dick's family) after his election as a Sinn Fein MP. This letter was for sale in 2009 at Whyte's.

Unlike his siblings, he took no part in Civil War (1922-23).
He went into business end-1922, as "O'Mara Rubber Co", based at 79 Dame St, Dublin, agreement dated 9th Oct 1922.
The rest of the family was jailed after Free State raid on Ailesbury Rd in the Civil War, Nov 1922. Dick was arrested but soon released. He was not imprisoned in the Civil War.
In Feb 1923 [P106/396] when most of the family except Dick were in jail, a party of Free State soldiers threw a hand grenade into the hall of Ailesbury Rd, only caused minor damage. This would be the episode remembered in [Nell's obituary] where "the Free Staters tried to burn down Ailesbury Road, but were unsuccessful". [P102/543] says "A mine was placed in the hall but fortunately only the staircase and some of the furniture were damaged.".
Dick's family were all released from prison by end of 1923.

Dick designed and built family home, "Ard Soluis", on a green field site at Kingswood, Clondalkin, Co.Dublin, 1934-35, fireplace had date "1934", moved in c.Feb 1935.
18 Eglinton Park became the home of his sister Sighle.
Humphreys listed at Kingswood, Clondalkin, in [Thoms, 1936] on.
He had his Thomond when moved to Kingswood, sold it c.1935/36.
He was constantly making modifications to cars owned in later years.
Dick's obituary says: "When Frank Ryan was in prison in Spain" [1938-40] "he" [Dick] "sent a telegram to General Franco trusting that there was no truth in the rumour that Ryan would be executed. He signed and added 'Catholic Barrister at Law'".
Like many Irish nationalists, he tried to see the good side in Irish nationalists' old allies Germany. He wrote a pro-German article in The Leader magazine, 8 Oct 1938, at the beginning of the German occupation of Czechoslovakia.
He made out a family tree in 1939 (after his mother's death).
Extensive orchards were planted in Kingswood, apple business started. Apple trade kept them going during WW2, when motor trade virtually non-existent.
He is summarised as "Company Director" in probate of Anno's estate 1959.
See RTE interview of Dick in 1966. 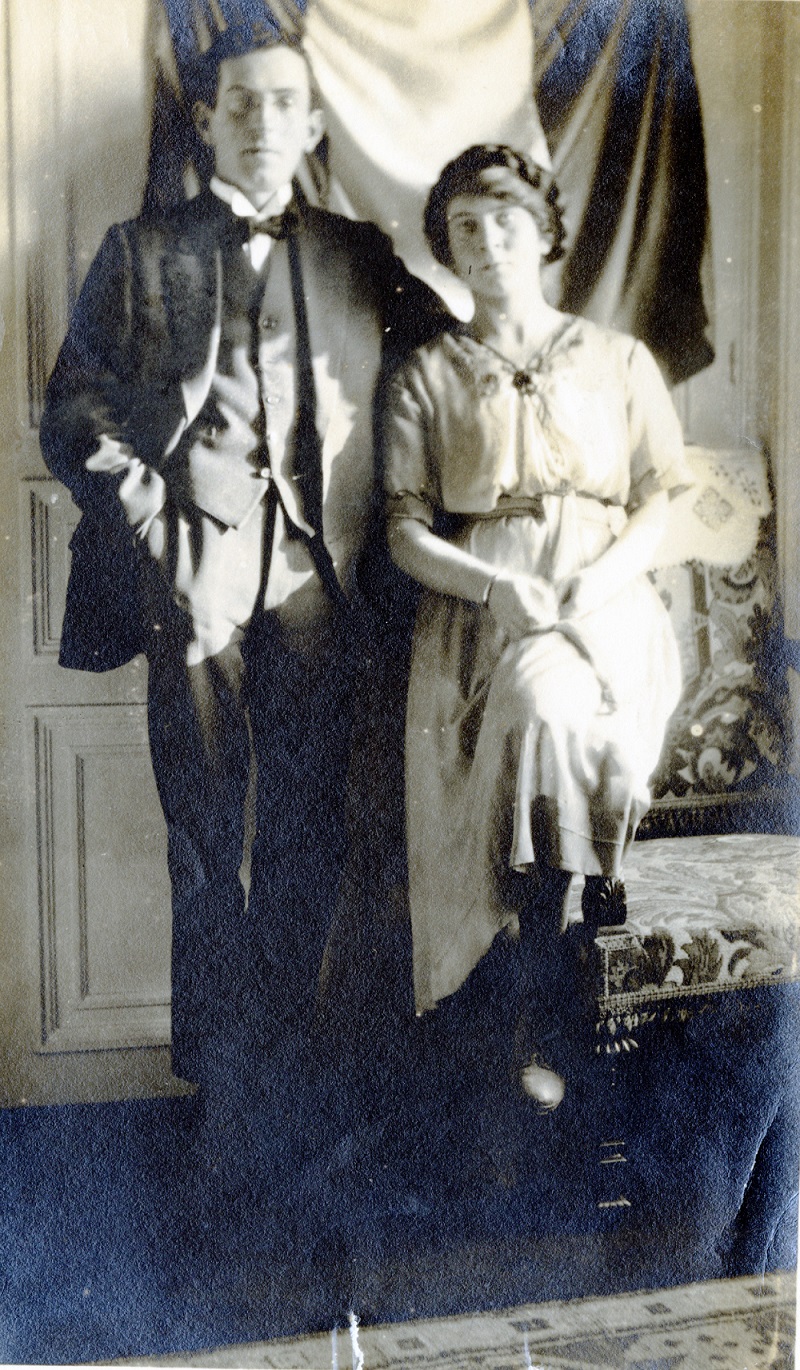 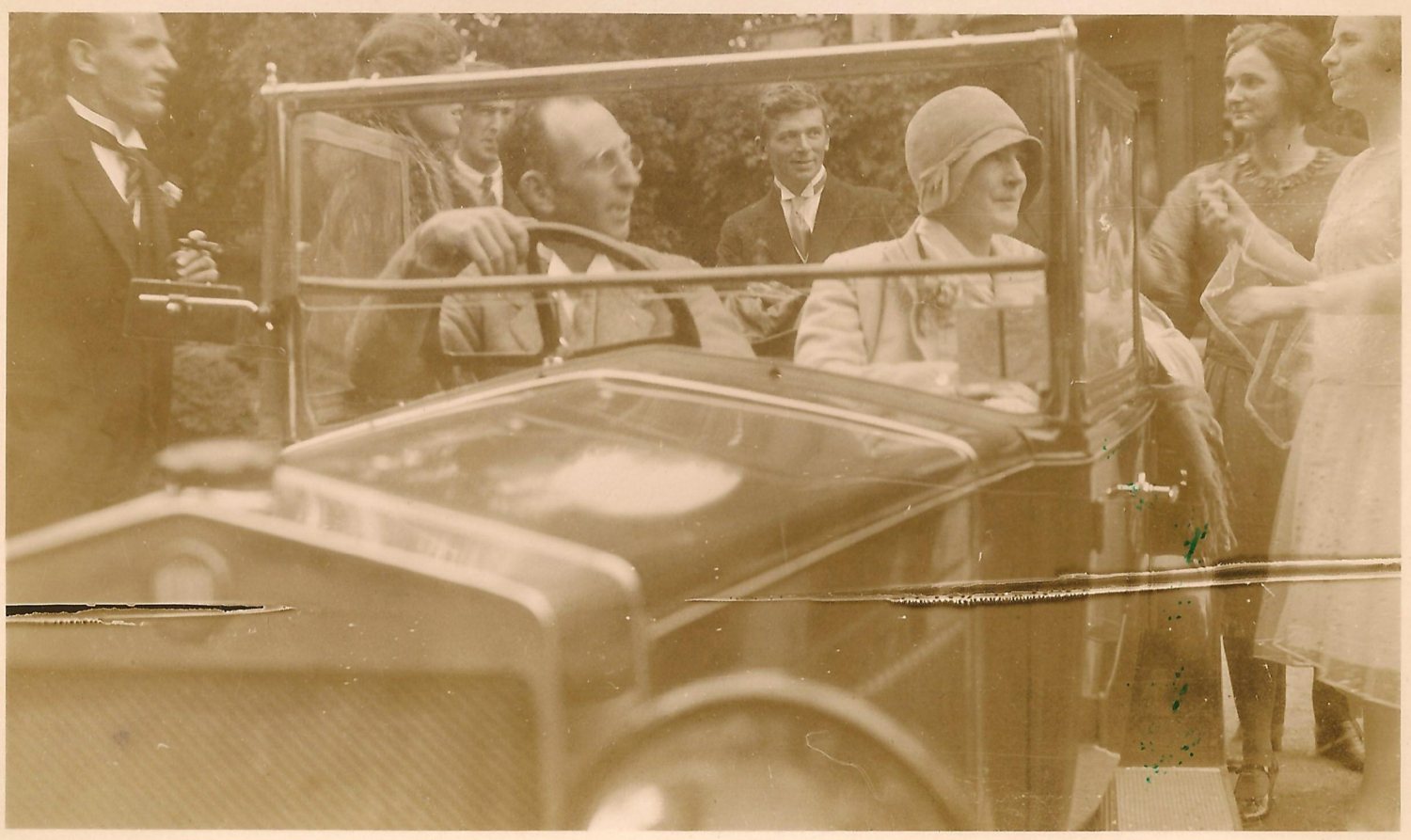 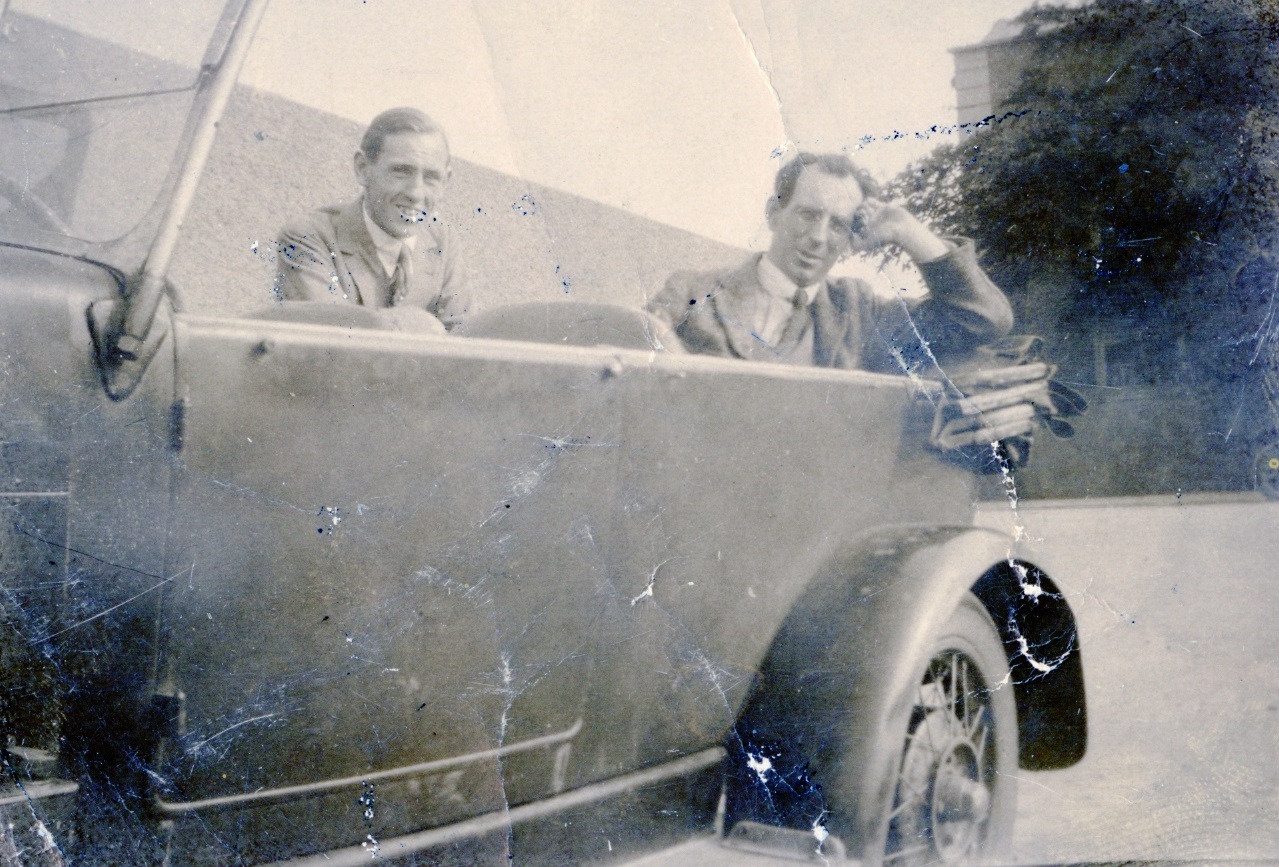 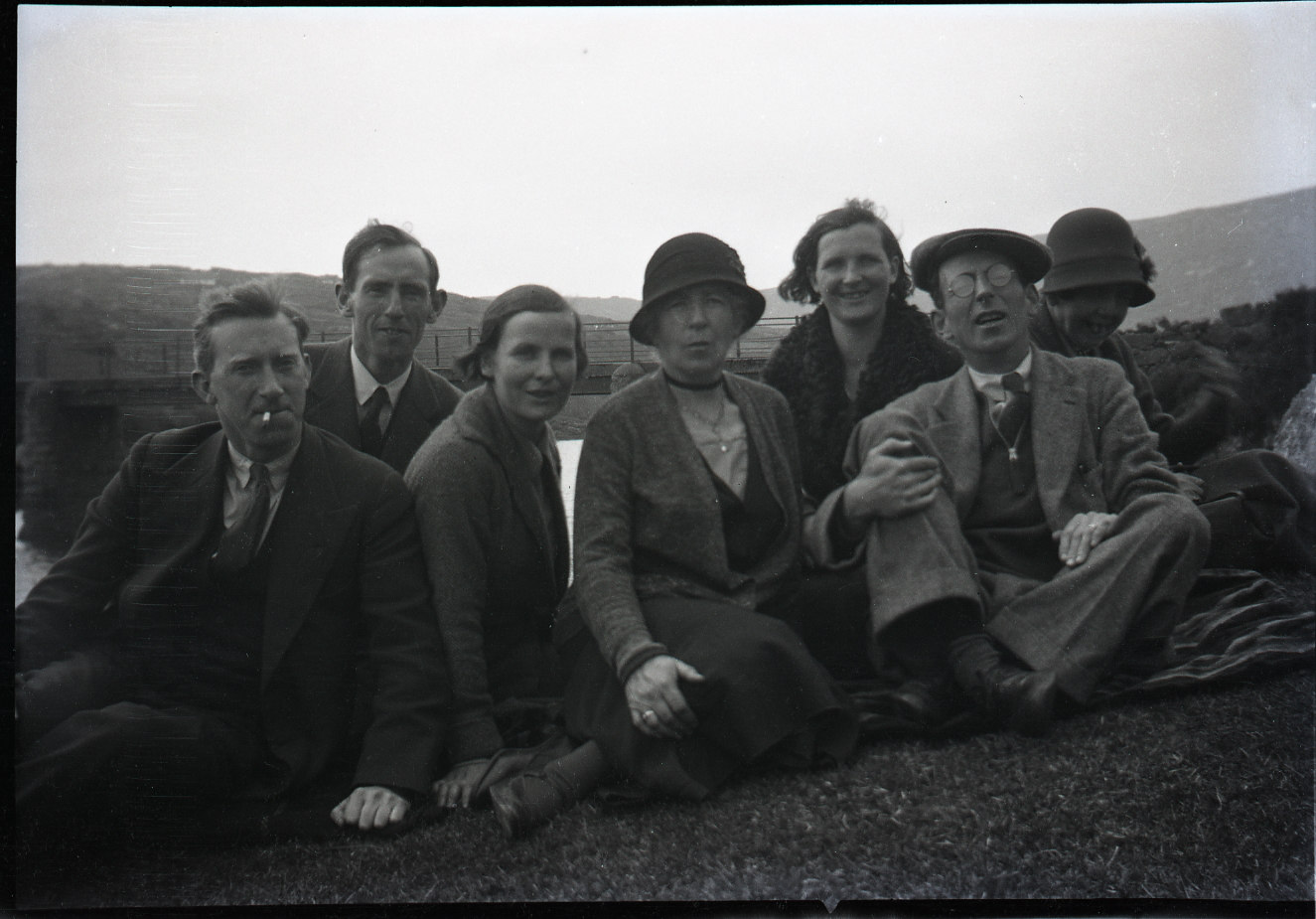 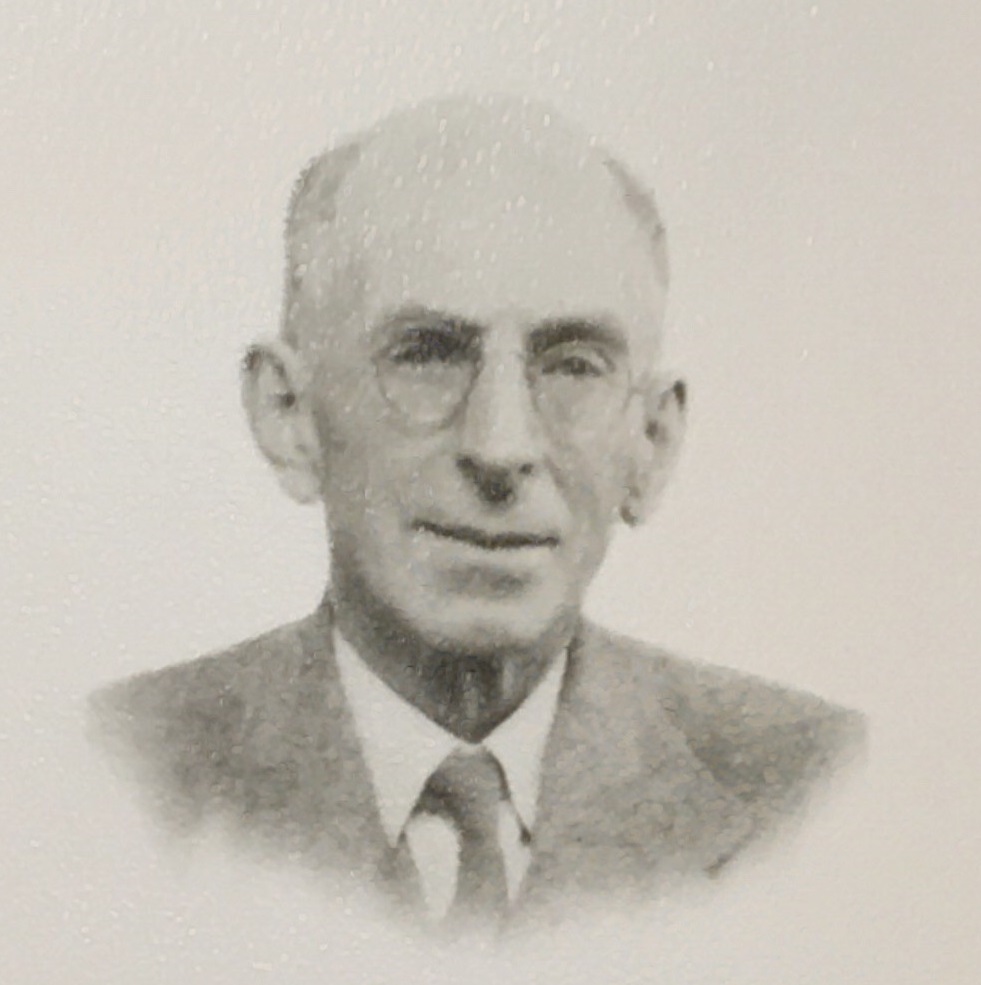 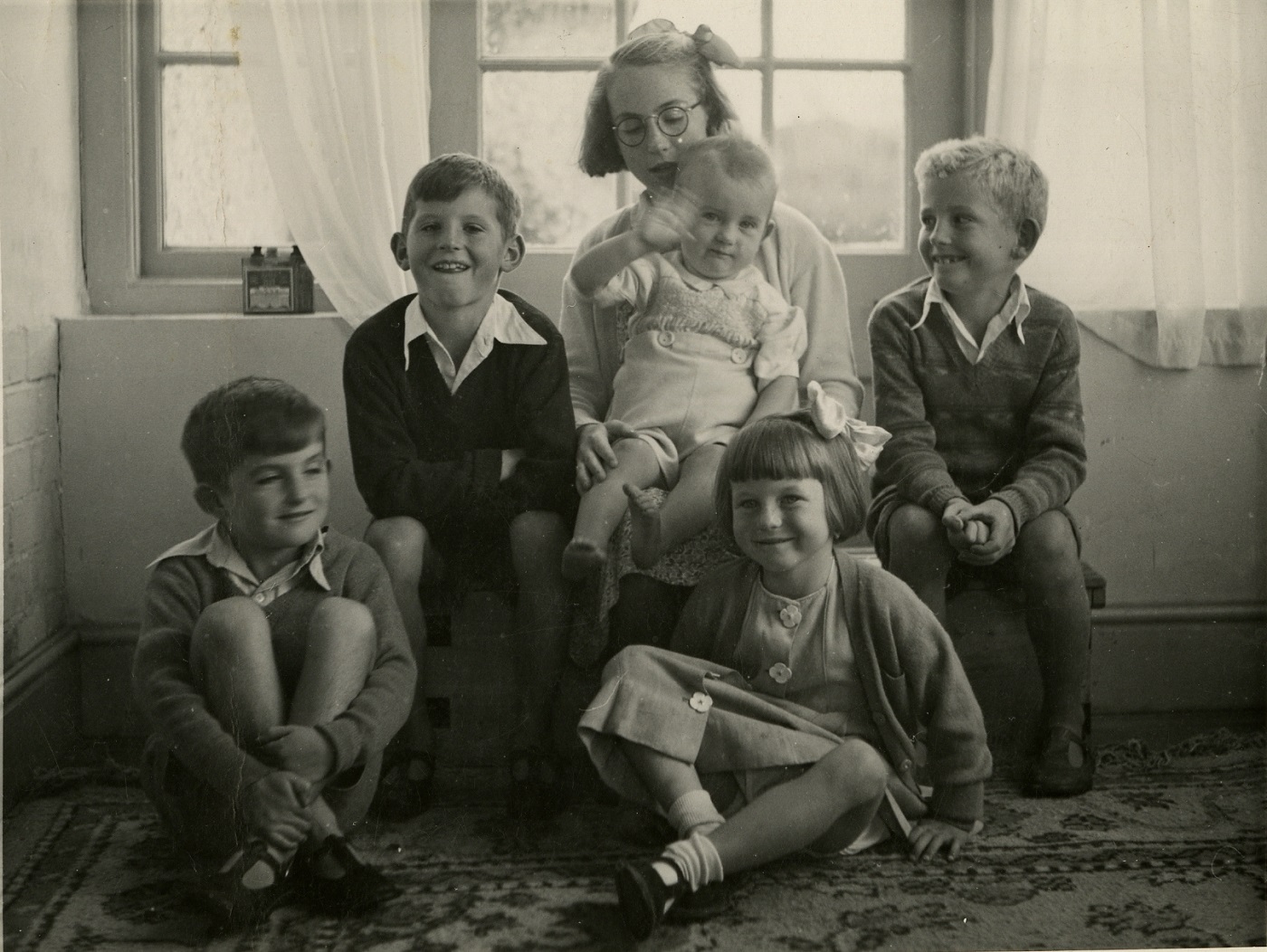 
2016 video by Alannah Humphreys about her great-grandfather Dick Humphreys.
She also wrote an article: "The 1916 Rising from the perspective of Richard Humphreys", Alannah Humphreys, in The Kinsale Record (The Journal of the Kinsale and District Local Historical Society), vol. 25, 2017.

Dick and Eithne are buried at Saggart, Co.Dublin.
See street view of entrance to graveyard.
Dick's grave says in Irish that he was in Dublin Brigade, IRA, and served the nation 1916-21. 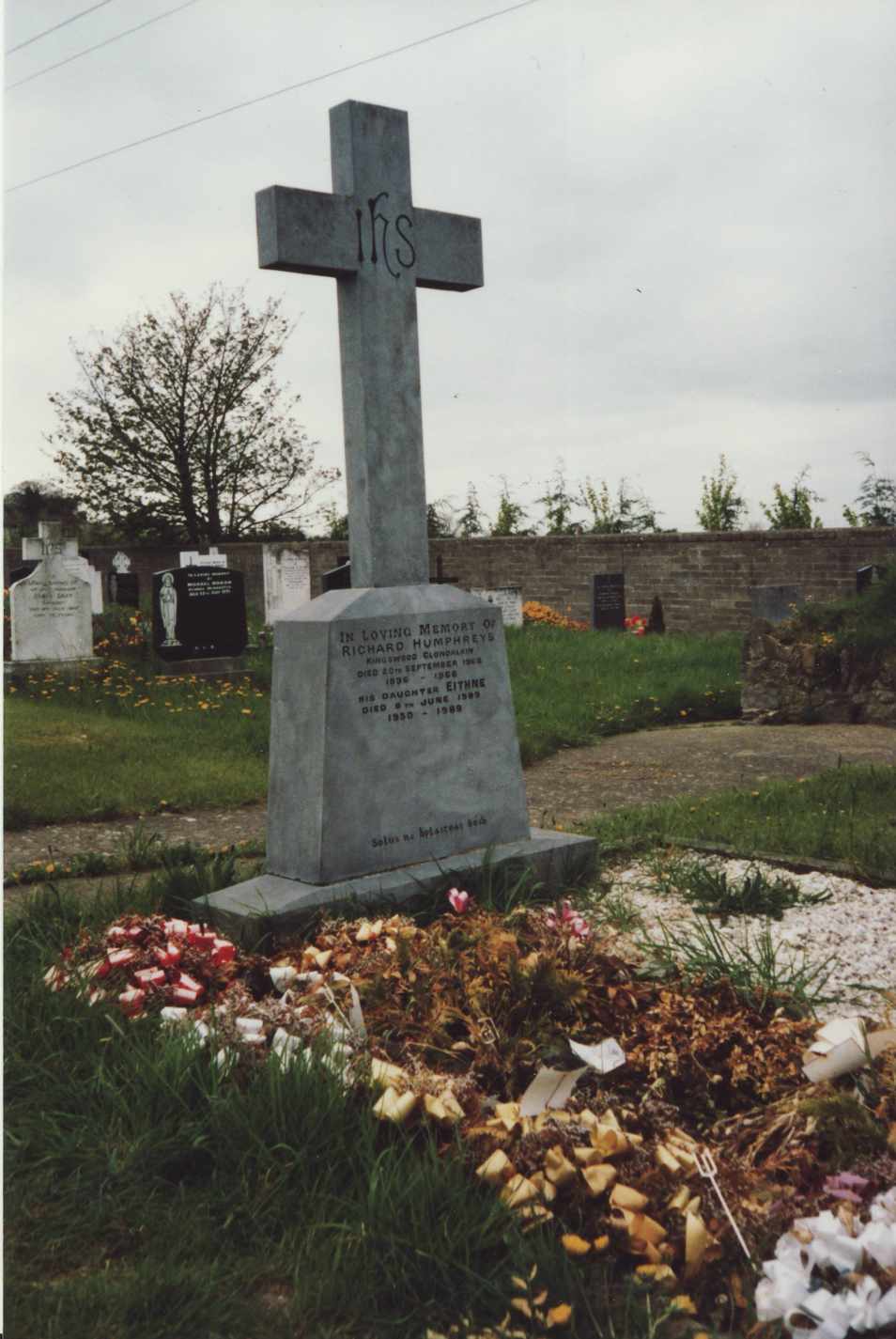 Dick's grave.
Photo April 1995 (Eithne not written on grave yet).
See larger and full size.
See other side.

The story of Granny's photo and Wikipedia

I have long been scanning family photos and putting them on this site. Something amazing happened to one of them. Granny's 1929 wedding photo was taken by some people from my site for use on Wikipedia. For whatever reason, the consensus view of the editors on Wikipedia liked to use this picture to illustrate wedding-related articles. (Against what must be millions of alternative pictures.)

It has been used as a core illustration of the "Wedding dress" entry from 2007 to 2019 so far!
The picture is also used to illustrate many other major Wikipedia articles!

Life is very strange. Starting 12 years after she died of old age, Granny's wedding photo started being viewed by millions of people all over the globe, and became one of the most-viewed wedding photos in history. I'm sure she would be pleased!

The "Wedding dress" entry on Wikipedia as at 2018.
Granny's photo has been a core illustration of this Wikipedia page since 2007.
Many, many millions of people will have seen it. Perhaps more than have seen any other Irish wedding picture in history.

Memoir by Dick Humphreys of 1916 Rising

"I wasn't actually in Moore St. And I heard of my uncle's death only 2 days later when I was in the Castle. A Tommy mentioned about one of the leaders, O'Rahilly, being killed. And it was a frightful shock because I knew they'd got out alright. I didn't know that any of them had been killed at the time."
- Dick hears about the death of his uncle The O'Rahilly in the 1916 Rising. From 1966 interview.

"England has triumphed once again, but ... this fight has shaken her as she has never been shaken before. Next time the whole country, and not Dublin alone will join the fray."
- The ending of Dick's memoir of 1916, as published in [Jeffery, 2006].
I had thought this was a remarkable prophecy made by Dick at the time, but it does not appear in the original in The Belvederian, 1917. Unfortunately, it is an addition made by Dick to his memoir later.