Sir Rowland Blennerhassett, 4th Baronet,
Catholic, born 5 Sept 1839.
Political writer, historian.
See Wikipedia and Wikitree and thepeerage and blennerhassettfamilytree.
He succ as Baronet as a child in 1849 when his father died.
He was educ Downside School (Catholic school), Somerset, 1849-56.
He was educ Stonyhurst College (Catholic school).
He was educ Christ Church, Oxford. Entered 1859. Left without a degree.
He was educ Christ's College, Cambridge. Entered later in 1859.
He turned 21 in Sept 1860. He inherited Churchtown House, Co.Kerry.
Appointed a J.P. for Co.Kerry, 3 Dec 1860. Listed as Sir Rowland of Churchtown.
Churchtown accounts book 1862-64 shows an active and busy farm and estate.
He is listed as of Churchtown on p.1741 of The Edinburgh Gazette, 18 November 1862.
He formed a friendship with the Catholic historian Lord Acton from 1862.
He was educ Catholic University of Leuven. Graduated as Doctor "in Scientia rerum politicarum" (Doctor of Political Science). Received certificate June 1863. From Baronets papers.
In 1864 he studied at Munich, where he formed a lifelong friendship with Ignaz von Döllinger, the unorthodox Catholic priest and theologian.

MP for Galway city 1865-74: He was Liberal MP for Galway city 1865-74. See contributions in Parliament.
He is listed as of Churchtown House in his Member's Certificate for the [RIA] in 1866.
High Sheriff of Co.Kerry 1866-67.
In declaration dated 26 Feb 1867 his residence is Churchtown House.
Early in his career he supported Home Rule for Ireland.
He helped to start the Chronicle, a literary organ of liberal Catholicism, 1867. Its support for Irish Home Rule made it unpopular. It published until 1868.

He mar 9 June 1870 to Countess Charlotte de Leyden [born 1843, Munich, German Catholic]. See Wikitree.
She was dau of Count Karl Joseph August von Leyden and his wife Franciska von Weling.
She was a Catholic disciple of Döllinger, which is how she met Blennerhassett in early 1870.
She became a student of Blennerhassett's friend Lord Acton.
She became a historian and author.

He sold Churchtown House c.1870. NOT 1860.
Lived in London. Though retained deep involvement with Ireland.
Links to Acton, Throckmorton, Dease:

1872 Kerry election: Letters of Jan-Mar 1872 show that the 4th Baronet considered switching to Co.Kerry for the by-election of Feb 1872. But the Liberals nominated James Arthur Dease. The Home Rulers nominated the Baronet's 2nd cousin Rowland Ponsonby Blennerhassett, and the Baronet says he will not go against his cousin and in fact will support him. He says Dease is unpopular in Kerry and can only win "by landlord coercion of the grossest kind".
His cousin won a famous victory for Home Rule in the election. The 4th Baronet says it was an own goal by the Liberals - that if he had been nominated, his cousin would not have run (his cousin himself says so) and he would have won the seat.
He is happy his cousin won, and in letter of 23 Mar 1872 says his cousin would not have won without his help.
He changed his views on Home Rule in the 1870s and became an opponent of Home Rule. A strong opponent of Parnell.

MP for Kerry 1880-85: He was Liberal MP for Co.Kerry 1880-85.
Kerry had two seats. The other MP in 1880-85 was his 2nd cousin, the Home Rule MP Rowland Ponsonby Blennerhassett.
He is listed in 1881 census as a lodger at 3 St. James's Place, Pall Mall, London. From here.
He spoke and wrote on Irish education and land question. He advocated peasant proprietorship 1884.
Charlotte published a multi-volume biography of Madame de Staël in German, Frau v. Staël, ihre Freunde u. ihre Bedeutung in Politik u. Lit. ("Madame v. Staël, her Friends and their Importance in Politics and Literature"), 3 vols, 1887-1889 (French 1890, English 1891). She published other works from 1894 to 1916.
4th Baronet was President of Queens College, Cork 1897-1904.
In the 1901 census he is found at the London and North Western Hotel in Dublin.
In October 1901 he was awarded an honorary doctorate (LL.D.) by the Royal University of Ireland.
He died 22 Mar 1909, London, age 69 yrs.
He was bur in churchyard of St. Benedict's RC church, Stratton-on-the-Fosse, Somerset. This is beside his old school, Downside School. See map and street view.
See Blennerhassett Baronets papers.
Charlotte died 1917.
See admin.
4th Baronet and Charlotte had issue:

Speculation in 1886 that Sir Rowland would be appointed Under-Secretary for Ireland.
It did not happen.
From The Montreal Daily Herald, 25 Nov 1886. 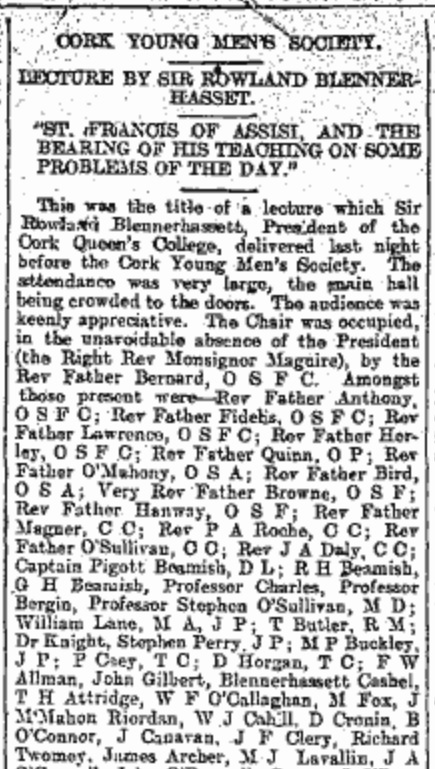 4th Baronet listed in [Thom's, 1901, p.228].
Gives his residence as Queen's College Cork.
Though this may just be a postal address. UCC profile says he "did not take up permanent residence at the President's house on campus".

Papers to be consulted