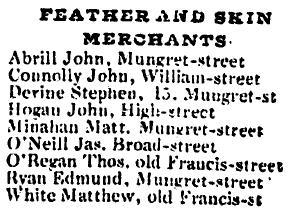 John Ebrill,
born 1780.
See entry in tree by Paddy Waldron.
He was a feather, skin and wool merchant in Limerick.
[PAT/2, p.21] said he was "in good circumstances, he was a friend of the clergy and well-to-do".

"John Ebril" or "John Ebriel" is listed on Mungret St in Griffith's Valuation, 1850 as holding a large number of properties.
He is leasing these properties: He is also leasing out properties in Old Francis street, John's street, Cabbage Market lane (off John st.), Nicholas street, Brennan's Row, Dwyer's Lane, Cassidy's lane and Garryowen, in all of which he had lodgers or sub-tenants in occupation.

[PAT/31] says Bridget did not help her daughter Nell when Nell fell on hard times during the Famine and after. "Once when she was ill, hungry and desperate she appealed to her own mother. (That is the mother who was a termagent. What answer I wonder did she make.)"