Patrick Pigott,
born 1788.
His father was a farmer outside Limerick city.
[PAT/2, p.22] and [PAT/32] says he went to a hedge school.
"He was the youngest son and his father's favorite. As a young man he would ride into Limerick on horseback dressed in doeskin breeches and a green coat with silver buckles."
His father settled him up with a good public house to run in Limerick.

The business fails:
Patrick was ruined in the Famine 1845-50, and his daughter Mary died.
[PAT/31] says "the shop failed" when Ellen was age 2 (1847).
[PAT/2, p.21] says his wife Nell "wore herself out in the service of others, being grateful for the least kindness shown to her". After her husband's ruin "she worked day and night to keep her family as respectable as could be". "Once she met John Nevitt, white faced and ravaged by drink and misery. She scarcely reached home before she fainted. She never saw him again."
Patrick left Limerick and found employment with Ryan's bakery in Bruree, S Co.Limerick. Stayed there 5 years (i.e. maybe 1847-52).
He is not listed on Mungret St in Griffith's Valuation, 1850.
Can't find Patrick or his family anywhere else in Co.Limerick in [Griffiths Valuation].
"Ellen Pigott" sp bapt of her niece Mary Catherine Power 1851.
Patrick returned to Limerick, maybe 1852.
[PAT/31] says they lived opposite Kate Power, who was on Mungret St.
After 5 years, Patrick went to Bruree again (i.e. maybe 1857).

Family living Mungret St in 1863, when Ellen got a letter there.
[PAT/2, p.22] says Patrick was a "big, simple, trustful man, even when things went against him he was renowned for his honesty".
He is described as "clerk" at Ellen's marriage 1867.
Nell must be "Ellen Piggott" who sp bapt of Mary O'Mara 1868.
There is a letter of apparently 1871-72 to his dau Ellen, who is away, from her husband Stephen O'Mara, who is in Limerick. Stephen reports from Limerick: "Your Mama and Dada is quite well and strong, so am I."
Patrick is listed as "Patrick Pigott", shopkeeper, at death 1873 [GROI], living Mungret St [burial record].

Nell moved to Roches St, Limerick, in 1873. Moved in with her dau Ellen O'Mara.
She is living Roches St at birth of her grandson James O'Mara in Aug 1873.
She writes an undated letter (probably 1874) to her dau Ellen, mentioning her grandson James. "I expect Jem will be walking and talking but of course he won't know his Gran."
"Ellen Pigott" registered death of her sister Catherine Power (died Dec 1874, registered Jan 1875). Ellen is living Roches St. It is signed with "her mark". Though she was literate.
In letter of think 20 June 1875, her daughter Ellen is away from Limerick, and Ellen's husband Stephen is light-heartedly complaining that his mother-in-law is making him eat too much food.
She wrote from Roches St, Limerick, to her dau Ellen in 1876 (or possibly 1875).
Burial record gives her address at death 1885 as 31 Roches St (her dau Ellen's house).

Nell dies, 1885:
She died 1885, age 77 yrs.
Can't find death in [GROI].
She was bur August 30, 1885, at Mount St. Lawrence cemetery, Limerick [burial entry].
Location 166 Ub. This would be the location of Ellen O'Mara's family grave.
Nell's son-in-law Stephen O'Mara writes on 10 May 1886 to his old friend Fr. Edward O'Dwyer, who has just been appointed Bishop of Limerick. Stephen recalls his assistance, including at: "the death of my mother in law, when under God you saved my wife's life".
Patrick had issue by 2nd wife: 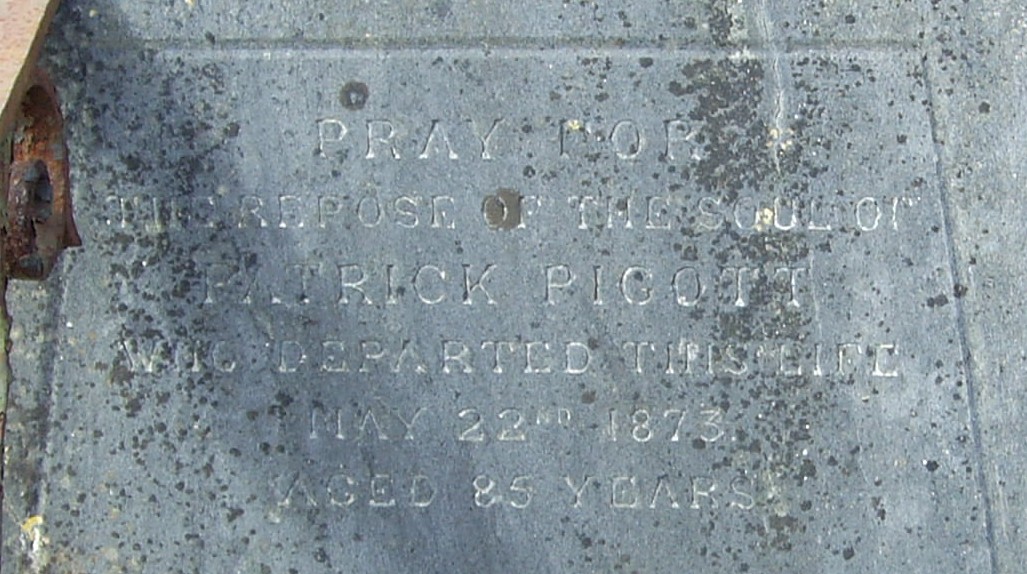 Patrick Pigott's 1st wife might be Mary Rice. These might be them: Patt Pigott,
mar Mary Rice,
had issue: