Richard Fitzwilliam, 5th Viscount Fitzwilliam, of Merrion (see here and here),
of Co.Dublin, born c.1677.
His father was Catholic, and so was he at first.
He succ 20 Feb 1704.

He mar (settlement 26 Feb 1704) to Frances Shelley [Roman Catholic, born 15 June 1685, descendant of Edward III].
Probably married in England.
Marriage not found in transcripts of St.Andrew's and St.Kevin's (St.Peter's) CoI par records in [Ms 2062].
She was descendant of Fitzwilliam of England.

Conforms to established church:
Their dau Mary was bapt in 1707, at Hampstead parish church in London (Church of England) but it notes that her father is still a Catholic.
5th Viscount conformed to established church 1710 so could take part in political life.
Took his seat in the Irish House of Lords 25 May 1710.
His son Richard was bapt Protestant in Dublin in 1711. The younger sons were bapt Protestant in Dublin in 1712-14.

Builds new seat at Mount Merrion:
The 5th Viscount abandoned Merrion Castle 1710 [Pearson, 1998].
He built a new residence, Mount Merrion House, on "Mount Merrion", the hill overlooking Merrion and Dublin Bay, in 1711.
The children grew up Mount Merrion.
[Ball, vol.2, 1903] mentions a large picture then in Mount Merrion of the three sons as boys playing in the grounds. Current location of picture unknown.
At the time of Queen Anne's death 1714, the Archbishop of Dublin, William King, was staying at Mount Merrion House working on the revision of his book.
The 5th Viscount became MP (Whig) for Fowey, Cornwall, in Jan 1727 [using new style year, at the time this was regarded as the end of 1726].
This was a "rotten borough", but in England, not Ireland, so he needed to be at the London parliament, not the Dublin parliament.

Leaves Ireland, moves to England, around 1726-27:
After centuries in Ireland, the Fitzwilliams moved to England. (Despite building a new seat in Dublin.)
The 5th Viscount moved to England around 1726-27.
He became a follower of the Prince of Wales (shortly George II). His family became favourites at Court. The Prince succ as George II in June 1727.
The Lodge at Mount Merrion was built c.1727.
They rented Mount Merrion out. See [Ball, vol.2, 1903] for an account of the successive tenants.
Frances separated from her husband c.1730. She entered a convent abroad. The fact that she entered a convent indicates that she stayed Catholic, even as her children were bapt Protestant.
5th Viscount was MP for Fowey until 1734.
He lived Thorpe, Surrey. Listed as of there at death.

Frances returned from abroad c.1750.
Her will dated 25 June 1761.
She lived to a great age. She lived to see the elopement of her grandson the 10th Earl of Pembroke in 1762, and the birth of her illegitimate great-grandchild Augustus Reebkomp in Nov 1762.
She outlived her daughter Mary, who died 1769.

Frances Shelley, 1723.
Used here with the kind permission of the Fitzwilliam Museum, Cambridge.

5th Viscount took his seat in the Irish House of Lords 1710.
In this period the Irish Parliament met at Chichester House on College Green (built before 1605, demolished and replaced with the new Parliament building 1729) and the Blue Coat School (built 1671, demolished and replaced in 1773).
5th Viscount moved to England around 1726-27.
The grand new Irish Houses of Parliament were built in 1729.

Tapestry of King William at the Boyne (commissioned 1728).
House of Lords chamber of the Irish Houses of Parliament (opened 1729).
Photo 2007. See larger and full size.
From Aapo Haapanen. See terms of use.
See more pictures.

College Green, Dublin. Looking from Trinity College up Dame St. 1753 or later.
Irish Houses of Parliament on RHS.
From here.
See other version. On sale here.

St.James' church, Piccadilly, London, was a new parish church consecrated in 1684.
Burial place of Frances Shelley in 1771.
Heavily damaged in WW2 in 1940.
See images and interior.

St.James' church on Piccadilly (then called Portugal St) on London map of c.1705, section W5.
It is the church between "Portugal" and "Street".
See modern satellite view and street view.

The 6th Viscount was bapt 1711 at St.Andrew's Church, Dublin.
This was the old St.Andrew's church, built 1670, called "The Round Church", where St.Andrew St meets Suffolk St. 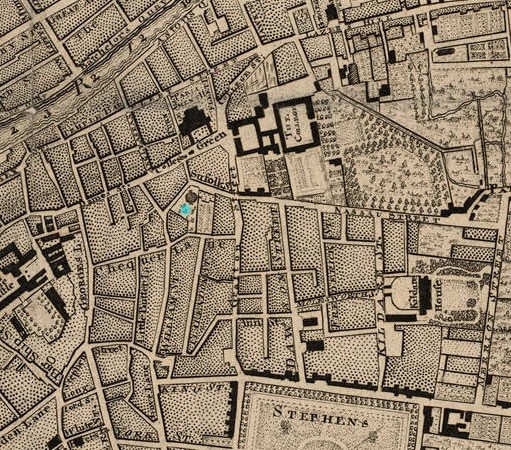 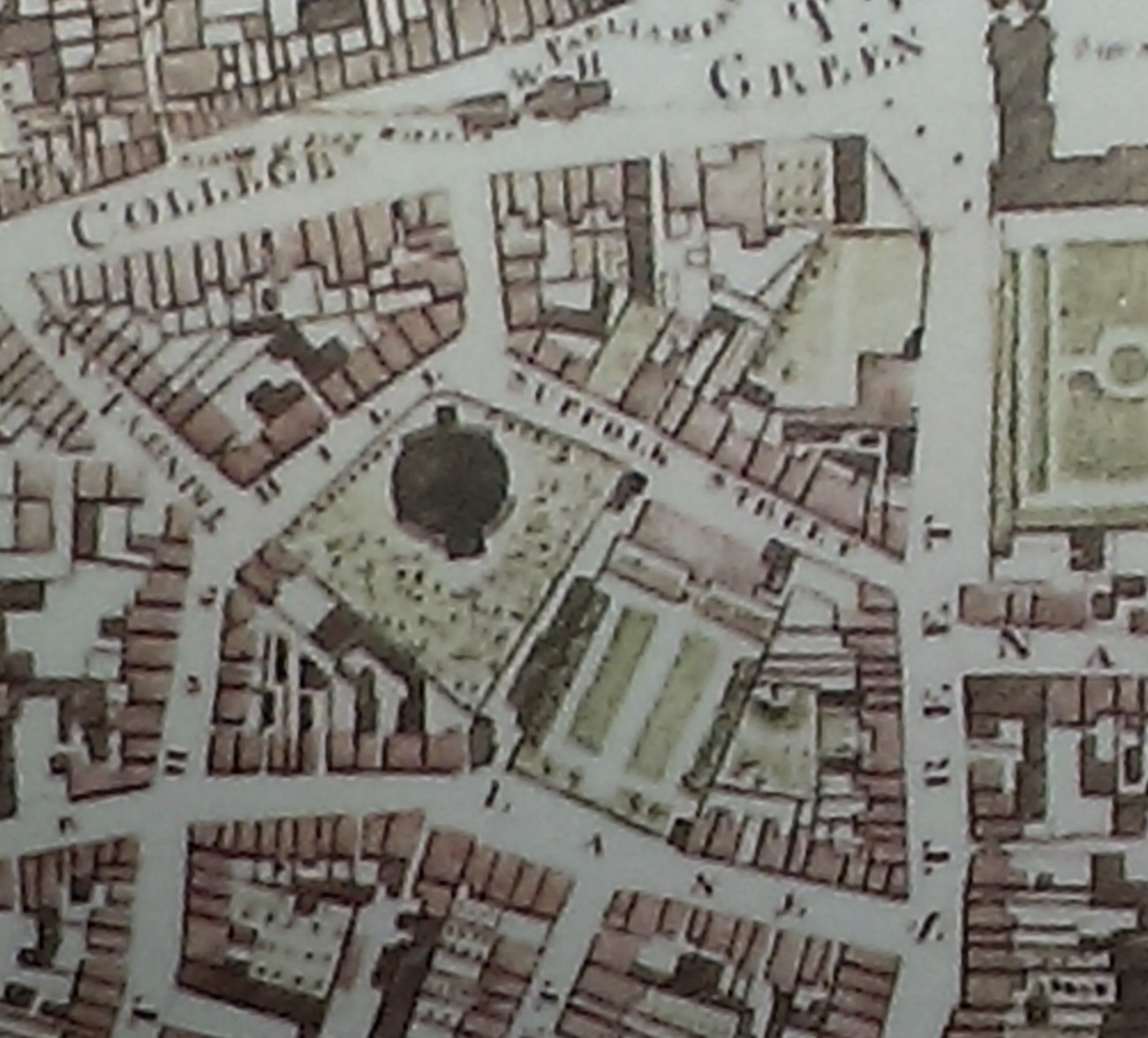 St.Andrew's church on hand-coloured John Rocque map of Dublin, 1756.
On the E side of it is the Earl of Kildare's old town house.