The elopement of the 10th Earl of Pembroke and Kitty Hunter

The elopement of Henry Herbert, 10th Earl of Pembroke, and Kitty Hunter in 1762.
My wife and children exist because of this elopement.


In 1762, Henry Herbert, 10th Earl of Pembroke [born July 1734] was one of the richest and best-connected men in England.
He was married to Elizabeth Spencer, daughter of the late 3rd Duke of Marlborough and sister of the current 4th Duke of Marlborough.
He had an heir (the future 11th Earl of Pembroke).
He had a great mansion, Wilton House, in Wiltshire, and a town house, Pembroke House, in London.

After serving with the Army in Germany, Henry returned to England in Jan 1762.
He immediately met and fell for Kitty Hunter [born 24 Apr 1740].
She was age 21. He was age 27. She was daughter of Thomas Orby Hunter, Lord of the Admiralty.
Henry and Kitty went to a great ball on Wed 17 Feb 1762 at "Lord Middleton's" (presumably 3rd Baron Middleton). They danced together.
They eloped together the next day, Thur 18 Feb 1762. Him disguising himself as a sailor, and leaving a note for his wife.
[Gentleman's Magazine, March 1762] says that in his note to his wife he told her he had never been able "to bring himself to love her as she deserved; that Miss [Hunter] was the only person for whom he had ever felt a real affection, and that with her therefore he had determined to spend the rest of his days."
They went to the Low Countries.

But soon (before 30 Apr 1762) he was recalled to the Army in Germany.
Kitty was already pregnant and gave birth in Nov 1762 to a son, Augustus Reebkomp (later Montgomery).
The child's surname is "Herbert" at baptism, but they then settled on "Reebkomp" or "Repkombe", anagrams of "Pembroke".
Augustus was baptised in Holland in Dec 1762.
At some point Kitty returned to England.
Henry returned to England in Feb 1763 and was reconciled to his wife in Mar 1763.
(Henry and his wife had another child in 1773. Though he had more affairs and in 1788 they separated for good.)

About as well-documented an illegitimacy as you could imagine:
The parentage of Augustus Reebkomp is about as well-documented an illegitimacy as you could imagine, and about as well-accepted by the legitimate family.
The 10th Earl supported Reebkomp and sent him to Eton in 1767 to 1771.
Even Lady Pembroke generously welcomed him into the family (though she blocked his adoption of the surname Herbert).
The next generation too was close to Reebkomp and his family. He was liked especially by his half-brother George (the future 11th Earl), who had no other brother.
George in a letter to his father of 3 Apr 1787 said: "rejoice at his being a thorough worthy and pleasant being, which he most undoubtedly is." [PP, vol.2, p.346]

The elopement features in the movie The Madness of King George (1994).
The King introduces her: "Now, that's Lady Pembroke. Handsome woman, what? Daughter of the Duke of Marlborough. Stuff of generals. Blood of Blenheim. Husband an utter rascal. Eloped in a packet-boat."

Will of 10th Earl provides for his son Augustus Montgomery.
It refers to [Deed of 16 Apr 1771] providing for Augustus (then age 8).
On the next page he provides for a further annual income of £120 for Augustus.

In the 1793 codicil to his will, the 10th Earl explicitly says that Augustus is his son.

Reebkomp's will mentions a grant of a coat of arms from the Herald's Office "by which my father the Earl of Pembroke acknowledges me as his son".

An account of the elopement on pp.134-135 of the Gentleman's Magazine, March 1762.
The page header is "Authentic Account of Lord P--b--ke's Intrigue" which is not much of a disguise!

This has Kitty talking to "her mother" at the ball. Presumably this is her stepmother.
This says they planned to elope the night of the ball, but her mother whether knowingly or unknowingly foiled their plots.
So they came up with a new plan for the next day. She went out in her chair, met the Earl, and eloped, leaving a note for her father.

Letters of 1762 survive from society figures Horace Walpole and Lady Caroline Fox, both writing about the elopement.

Letter by Horace Walpole on 25 Feb 1762.
From pp.491-492 of same volume.
He passes on a quip that apparently someone else made:
"As Pembroke a horseman by most is accounted, 'Tis not strange that his lordship a Hunter has mounted."

Letter by Lady Caroline Fox, 9 Mar 1762.
From p.321 of same volume.
Says Henry has encouraged his wife to join them.
"Miss H. was perfectly innocent", he implausibly tells her. (In reality, she is already pregnant.)

Letter by Horace Walpole on 22 Mar 1762.
From pp.496-497 of the Walpole volume above.
He says they were brought back, but her father would not receive her, so they left again. 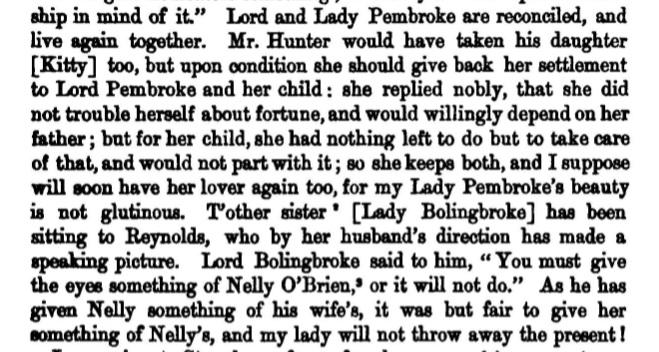 "As Pembroke a horseman by most is accounted, 'Tis not strange that his lordship a Hunter has mounted."
- A quip on the elopement made by some wit. Reported by Horace Walpole in his letter of 25 Feb 1762.