Henry was descendant of Fitzwilliam of England.
They lived at Wilton House.
Henry died 9 Jan 1750.

She mar 2ndly, 4th Sept 1751 [her age 44] to North Ludlow Bernard [or Barnard, think NOT Ludlow North Bernard].
[PP, vol.1, family tree] says he was born 1684, and so was age 67 at marriage.
His rank is uncertain. Some sources have him as Captain of the Horse Guards. But [PP, vol.1, p.28] has him as Major. Some sources have him as Major of the Dragoon Guards. Then [PP, vol.1, family tree] has him as Colonel.
She made him sell his commission on marriage.

He was a commoner, and the marriage was disapproved of by many, and just found amusing by others.
[Letter by Richard Rigby, 10 Sept 1751] says that Lady Townshend quips that she has "already engaged her Captain" in the event of her husband's death, "lest they should be all picked up".
[Letter by Horace Walpole, 14 Oct 1751] says: "she was a favourite" [at court] "but has disgraced herself by marrying a Captain Barnard". He says that the King, George II, recently said in her hearing that "I can't bear when women of quality marry one don't know whom!"
[Letter by Lady Vere, 1752] jokingly says that "Lady Betty" [Elizabeth Germain, a widow age 72] "thinks herself in danger of being Barnarded by a son of Lord Chesterfield" [Philip Stanhope, age 19]. She says that young Stanhope "is going to Paris again, if Lady Betty does not make him sell his commission" (a reference to Mary Fitzwilliam's marriage).

Mary lived to see the elopement of her son the 10th Earl of Pembroke in 1762, and the birth of her illegitimate grandchild Augustus Reebkomp in Nov 1762.
Her will dated 17 Jan 1766. She calls her husband "Thomas Bernard".
North Ludlow Bernard died 1766, age 82 yrs.
At death Mary is living parish of St George Hanover Square, London.

Mary dies, 1769:
Mary died before her long-lived mother.
She died 13 Feb 1769, age 61 yrs.
[Complete Peerage] says she died in "Privy Gardens", which would be Pembroke House, London, town house of her son the 10th Earl.
She was bur Wilton parish church with 9th Earl.
Her will proved 11 March 1769, Prerogative Court of Canterbury.

Baptism of Mary Fitzwilliam in Hampstead parish register (Church of England), London, 8 Sept 1707.
It notes that her father is still a Catholic.
From p.545 of vol.2 (1795) of The environs of London by Daniel Lysons. 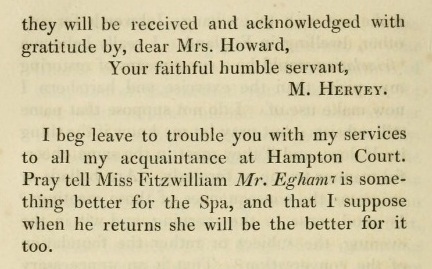 Mary Fitzwilliam was single at Court for some years, and others enjoyed speculating on who she would be matched with.
[Letter of 31 Aug 1728] by Lady Hervey refers to one of Mary's suitors.
"Mr. Egham" is a pseudonym.

Explanation of [Letter of 10 July 1731] by Lady Hervey:
She describes the maids of honour to the Queen in allegory as like volumes in a library.
The fourth volume, "The Lady's Guide, or the Whole Art of Dress", is thought to refer to the unmarried Mary Fitzwilliam.
It is fascinating that in the 1760s Kitty Hunter would have affairs and illegitimate sons with both Lady Hervey's son and Mary Fitzwilliam's son. 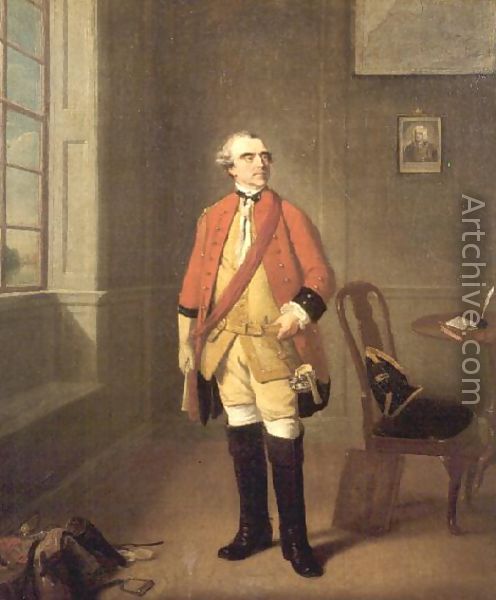 "Cornet North Ludlow Bernard", 2nd husband of Mary Fitzwilliam.
By Johann Zoffany.
From artchive.com and mystudios.com and 1st-art-gallery.com (who do hand-painted reproductions).