O'Mara's bacon factory, Roches St, Limerick.
Photo must be late 1980s (when it closed down).
Junction of Roches St and Anne St.
Anne St to the LHS goes down to Thomas St in the background.
Apparently Richard Ray's shop was just to RHS out of picture here.
Photo courtesy of Tony Punch. See full size.

O'Mara's bacon company, the source of generations of O'Mara family wealth.
Founded by James O'Mara in his house in Mungret St, Limerick, in 1839.
James is still in Mungret St in 1850.

James moved some time in 1850-1862 to Roches St, centre of new town, Limerick.
A dedicated factory was set up near top of Roches St.
The business is listed as "James O'Mara", "provision merchant", Roches St, in [Directory of Cork & Munster, 1867].
James and his sons Stephen O'Mara and Jack O'Mara built up the business over the 19th century into a great success.

James O'Mara was agent for O'Mara's in London from 1893 to 1914.
[Modern Ireland, 1899] describes Stephen O'Mara as then head of the company, says "nearly 100" people then employed at Roches St.
Stephen O'Mara bought bacon factory in Palmerston, Ontario, Canada.
Joe O'Mara went out to run it.

In 1938 the family business went public.
Bacon Company of Ireland formed, with Jack O'Mara as Managing Director, and subsidiaries the 3 bacon factories:

In 1987 the Bacon Company of Ireland merged with other companies to form Irish Country Bacon. Mickey O'Mara stopped involvement.
Shortly afterwards the old O'Mara factory in Limerick finally closed, after 150 years.
In 1988 or 1989 the O'Mara factory was demolished, and the site sold, became a car park.
The site is now the multi-storey car park on the entire block bounded by Roches St, Anne St and Roche's Row.

The date "1839" marked on the factory.
Detail of image above.

Trying to make sense of the numbered addresses on Roches St: 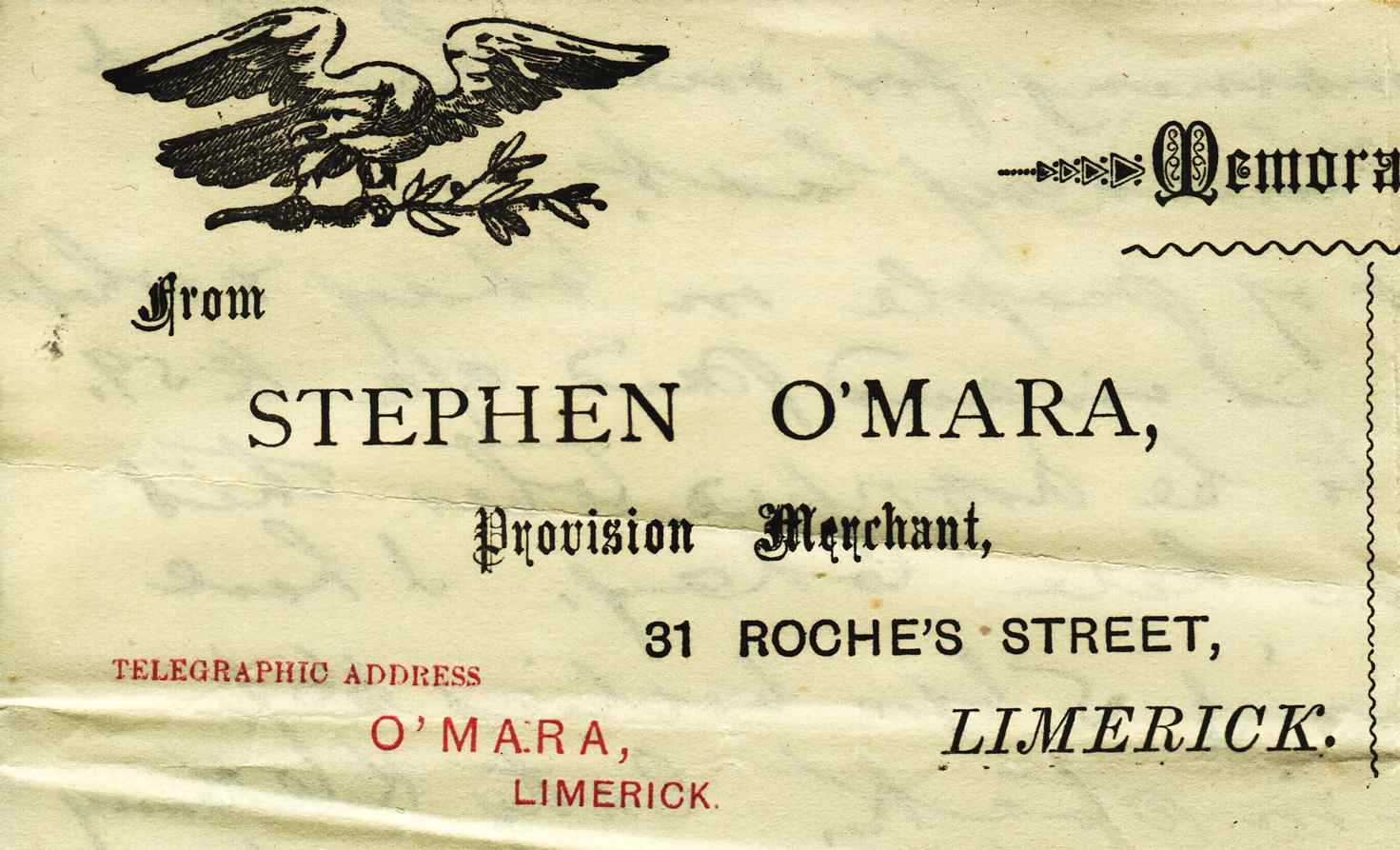 O'Mara's letterhead, Limerick, 1886.
Shows the factory at 31 Roches St.
They were on the telegraph.
See larger and full size.

James O'Mara shop at 37 Roches St.
Photo 1930s.
See full size. From Tipperary Archive. Tipperary Studies Photographic Collection.
This shows how confusing the numbers are. The Ray shop was no.37 in 1912, and then changed by 1913. Is this the old Ray shop of 1912, or was there a re-numbering?

The modern no.37 looks like the same building.
From street view.

The modern no.41 looks like the same building.
From street view.

The modern numbering. According to buildingsofireland.

Jim O'Mara was agent for O'Mara's in London from at least 1886.
He liased with his brother Stephen O'Mara in Limerick. Stephen often travelled to London to work with Jim. 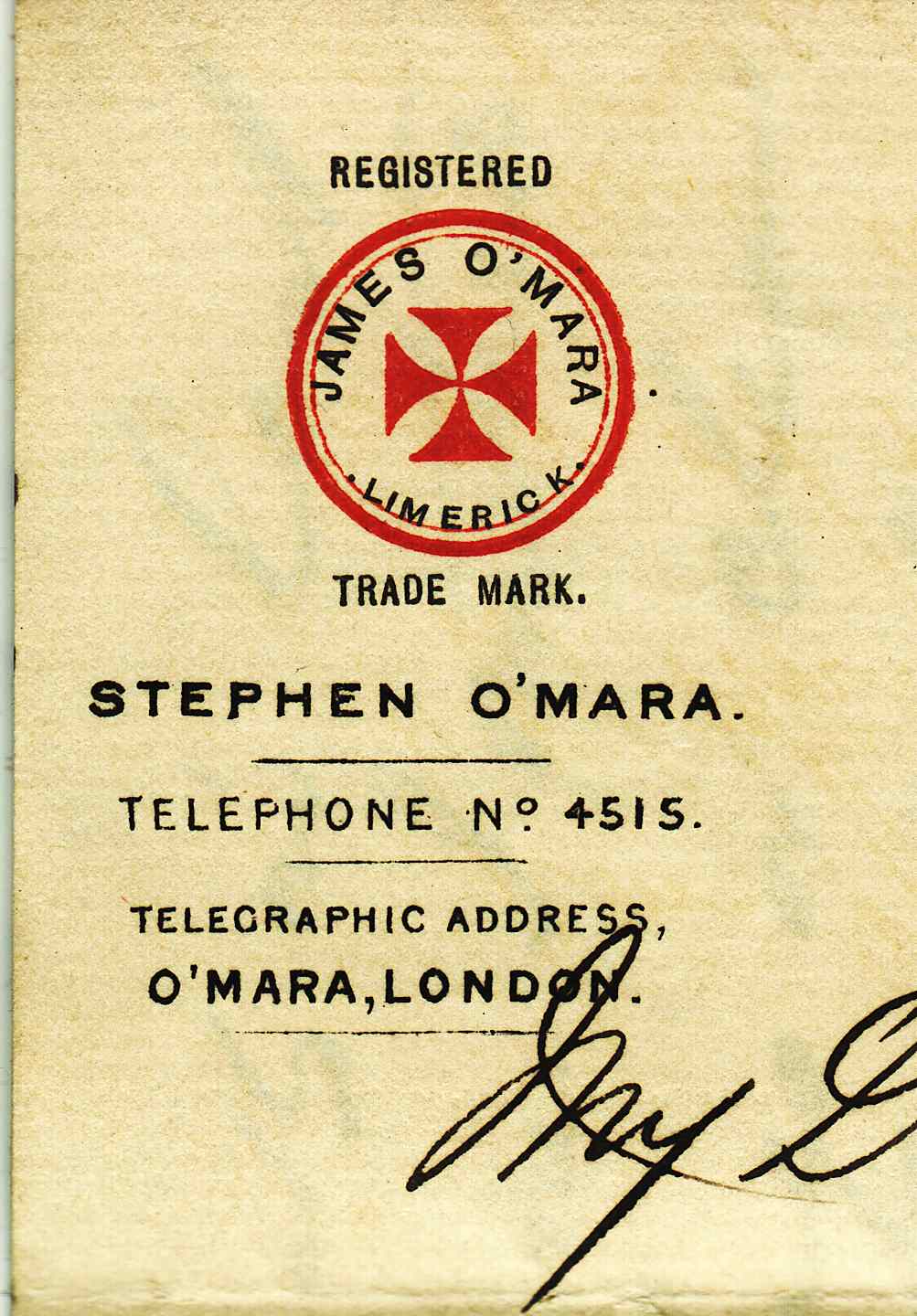 James O'Mara letterhead when he was agent in London in 1900.
Telephone no. Hop 515.
See full size.