Henry Herbert, 2nd Earl of Pembroke.
Portrait around 1590.
From National Museum of Wales.
Also on Wikipedia.

He mar 3rdly, 1577 [him age over 36, her age 15] to Lady Mary Sidney [born 27th Oct 1561, descendant of Edward I].
Lady Mary was a poet and translator, and a great patron of learning at Wilton.
[Aubrey's "Brief Lives"] says: "In her time, Wilton House was like a College, there were so many learned and ingeniose persons. She was the greatest Patronesse of witt and learning of any Lady in her time."
Wilton has been called "the nursery of the English Renaissance".
The countess of Pembroke's Arcadia 1579-81 refers to her. Her brother Sir Philip Sidney wrote it at Wilton. After his death 1586 she ensured the publication of his works.
2nd Earl was named as supporting the death warrant of Mary, Queen of Scots 1587.
The Ruines of Time by Edmund Spenser (friend of her brother Sir Philip Sidney) was dedicated to Lady Mary, 1590.

Henry Herbert, 2nd Earl of Pembroke.
A copy made around the late 19th century by Herbert descendants, the Marquesses of Bute.
Now at Castell Coch.
From BBC.

2nd Earl of Pembroke.
From NPG. See terms of use.
See other copies. 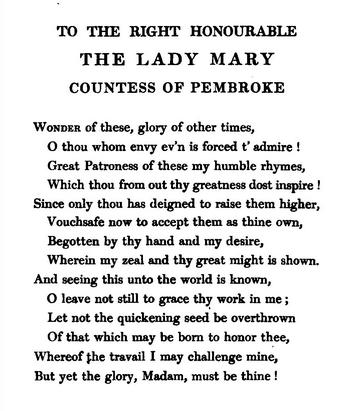 Dedication to Mary Sidney in Delia (1592) by Samuel Daniel.

Anecdote in [Aubrey's "Brief Lives"] about Lady Mary Sidney:
"She was very salacious, and she had a Contrivance that in the Spring of the yeare, when the Stallions were to leape the Mares, they were to be brought before such a part of the house, where she had a vidette (a hole to peepe out at) to looke on them and please herselfe with their Sport; and then she would act the like sport herselfe with her stallions. One of her great Gallants was Crooke-back't Cecill, Earl of Salisbury."
This would be Robert Cecil, 1st Earl of Salisbury. Her son would marry his niece.