Ballylongford, North Co.Kerry. Home in the 19th century of the Rahilly family.
Most of the town is in Ballymacasy townland, Aghavallen par. See 1829 to 1842 map.

The family was called "Rahilly" when they were at Ballylongford. They only became known as "O'Rahilly" later.

The date of founding of the Rahilly business in Ballylongford is unclear.
Finucane's pub thought that Rahilly built the old Rahilly house in 1806 or 1809, but this cannot be. They were still in Killarney.
It had been thought that Michael Rahilly started the business, and it was continued by his widow Ann.
However an invoice of Richard Rahilly says the Ballylongford business was established in 1836 (would be by Michael Joseph Rahilly).

Michael Joseph Rahilly ran the business in Ballylongford from 1836 to his death 1849.
The Rahillys lived in the old Rahilly house, Ballylongford.
When Richard Rahilly was carrying out repairs to the old house, getting rid of thatch roof, replacing with slate, he found a date in the rafter - 1847.
After Michael Joseph Rahilly died 1849, his widow Margaret McEllistrem ran the business.
She is listed there in [Griffiths Valuation, 1852].

Richard Rahilly took over the business c.1860.
He built the new Rahilly house, Ballylongford in 1874.
This was a new 3 storey house, beside the old Rahilly house, at corner of main crossroads.
It was the only 3 storey house in Ballylongford (at least, the only private house - the old mill is taller).
It had a shop, with a cellar at the front, with wines for the gentry.
His son The O'Rahilly was born in this house, 1875.
[Deed, 1902] refers to the original long-term lease, Blacker to Richard Rahilly, 7 Sept 1875 (lease started 25 Mar 1875) "of the plot of ground on part of which stood the dwelling house and business" of Richard Rahilly. This was the entire block S of the mill, bounded by the river to the W and Quay St to the E.
It seems Rahilly did NOT own the mill. Rahilly erected out-offices on the river.

The old house after the Rahillys

Michael Finucane died 1942.
The pub passed to his nephew, also Michael Finucane.
In 1969 Aodogán met a woman in Ballylongford who said her uncle bought the place from Rahillys for £800. She showed him the cellar under the shop, said they got as much for the wines alone as they paid for the shop. This is not very likely (£800 is actually about £300,000 in today's money) but it was sold cheap.

Michael Finucane leased the pub out in 2012 and someone else now operates it.
It still has O'Rahilly memorabilia in it.
It is still called Finucane's pub. Also called "O'Rahilly's" pub.

The new house after the Rahillys

There is a bust of The O'Rahilly nearby, in the grounds of the Catholic church. Erected 2016. 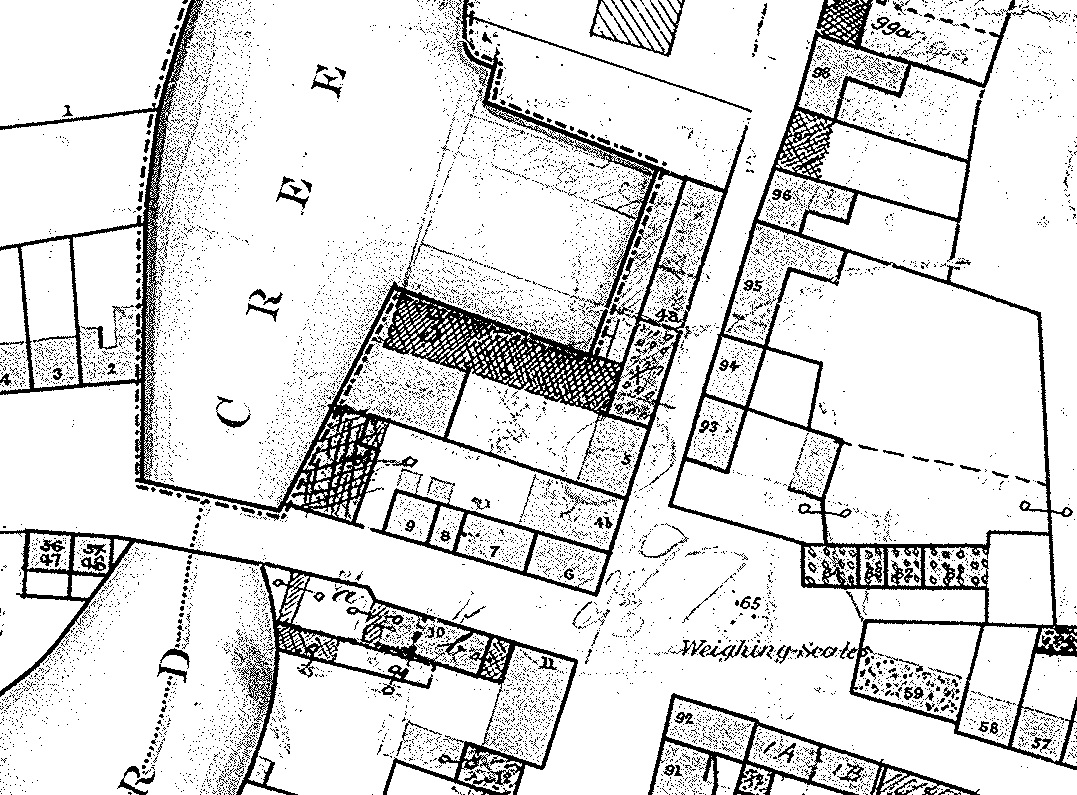 Mrs. Margaret Rahilly in [Griffiths Valuation, 1851] holds plot 4 on Main St, Ballylongford.
4 a is offices. 4 b is a fair sized house, with offices and yard.
4 b is the old Rahilly house.

Ballylongford in 1887 to 1913 map (the new 3-storey Rahilly house exists).
Post Office is at Rahillys. 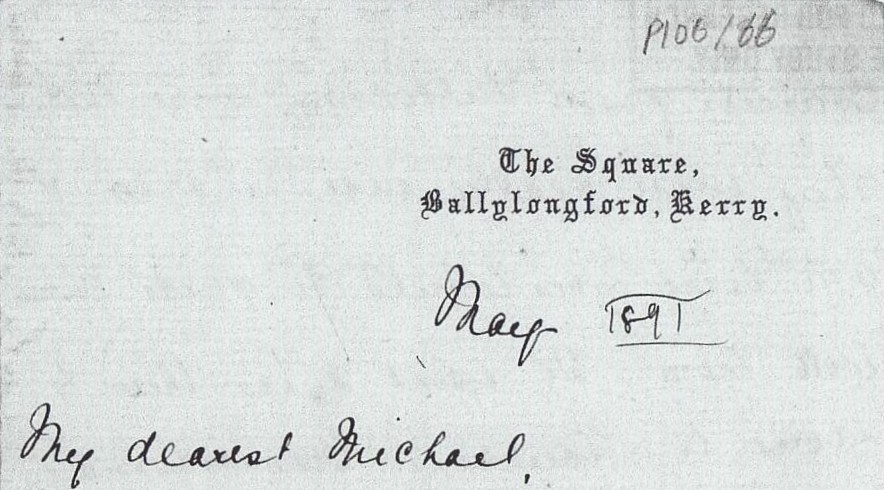 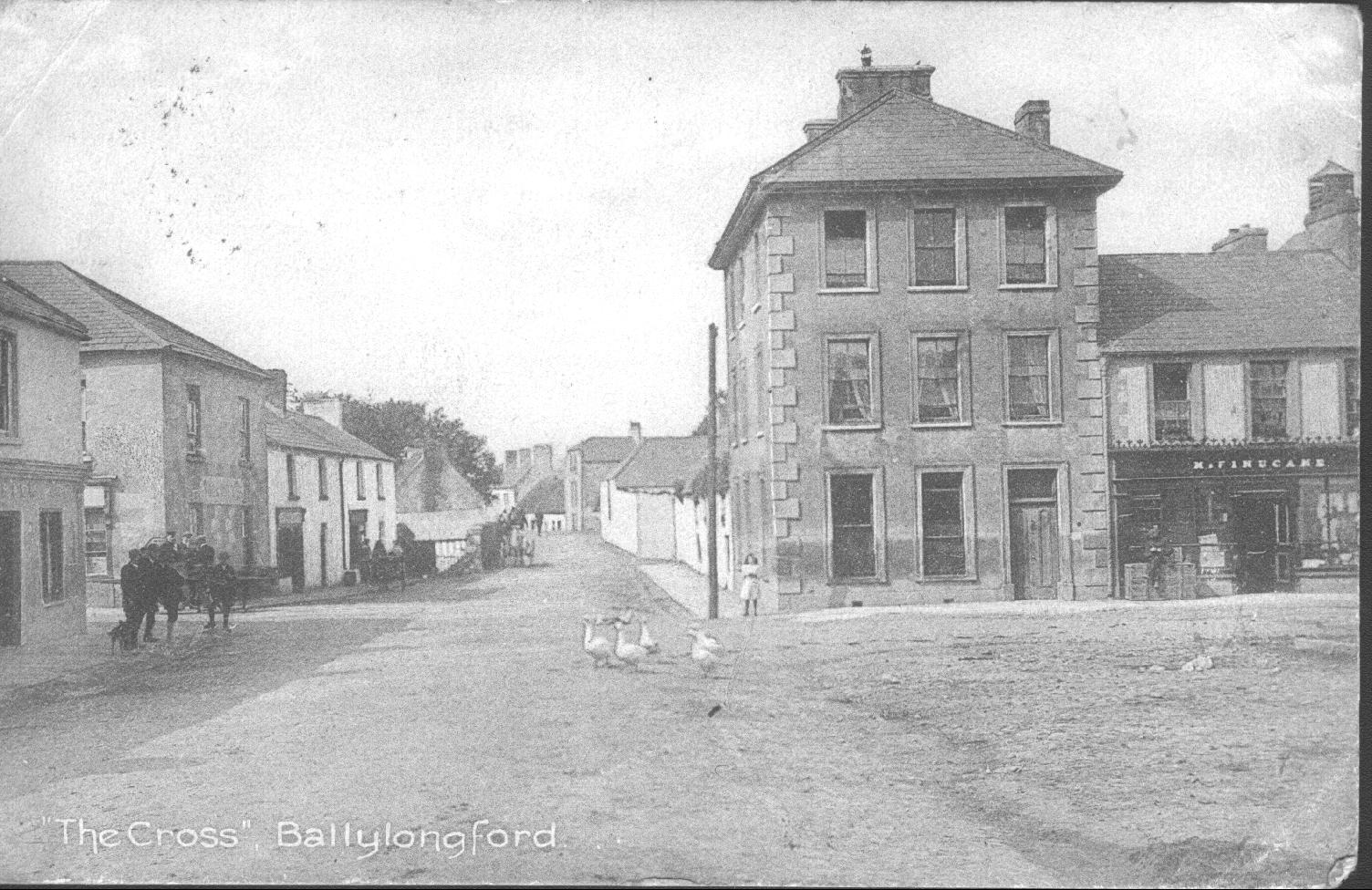 The crossroads, Ballylongford.
Postcard, c.1900 (after Rahilly sold to Finucane).
Looking W (down Bridge St to the bridge over the river).
Showing the 3 storey Rahilly house, and Finucane's pub in the old Rahilly house.
See full size.
See sepia version.
See other scan and colorised version.
See photo of other copy (and original). And alternate and alternate.

The new (LHS, 3 storey) and old (RHS, Finucane's pub) Rahilly houses, Ballylongford.
The plaque to The O'Rahilly is visible on the LHS (the S wall of the new house).
The old mill is in background.
See full size and wider shot.
See also shot of S wall of new house (this photo courtesy of Richard Humphreys).
Photos 2006.