Michael Joseph Rahilly signs his name in his notebook at Ballylongford on Thur 3 May 1832.
See larger and full size.

[P102/208(78 and 115)] gives an account of him. It implies that he grew up Killarney, not Ballylongford. (His father may never have left Killarney.) It says that he was going for the priesthood. But he fell in love with Margaret McEllistrem when on a visit to his uncle at Ballylongford. It says his father was angry with him leaving the priesthood and cut him off.
[P102/208(81)] has a slightly different version. It says his uncle Fr. Daniel O'Sullivan was educating him at Ballylongford, that he fell in love, and then his uncle would have nothing more to do with him. It says his father was probably dead.

He married, must be in 1836, to Margaret McEllistrem [born 1812].
Her family ran McEllistrem shop in Ballylongford.
They didn't want her to marry him. They disapproved since the police were considered below business. (Ironically, Margaret's nephew Edward McEllistrem later became a policeman in America.)

Michael Joseph was a shopkeeper in Ballylongford:
Margaret stayed in her home town of Ballylongford, set up shop with her husband just down road from her family's shop, McEllistrem's.
It had been thought that Michael Joseph was continuing a Rahilly family business in Ballylongford, but this may be the start of it.
Invoice of Richard Rahilly says the Ballylongford business was established 1836.
Margaret had a great head for business, and took all the local business from McEllistrem's shop down to Rahilly's shop. The McEllistrems grumbled about this into the 20th century.
He might be "Michael Rahilly" who wit marriage of John Fitzpatrick and Honora Hanrahan of Tarbert, 31st Jan 1837 [Ballylongford].
"Michael Rahilly" in letter of 1842 [P102/3].
He had a collection book in 1843 for Daniel O'Connell's Repeal fund. (Repeal of the Act of Union by peaceful means, quite a moderate cause for Catholics.) This is [P102/4].

When Richard Rahilly was carrying out repairs to the old house in Ballylongford, getting rid of thatch roof, replacing with slate, he found a date in the rafter - 1847.
Michael Joseph is listed as "shop keeper" and "merchant" (deceased) at his sons' marriages.
His brother-in-law Richard Mac Ellestrem, of whom he was very fond, died Aug 1848. Michael Joseph built an impressive tomb for him at Lislaughtin Abbey.

Margaret carries on the business:
Margaret carried on the business in Ballylongford, while bringing up children.
After the Famine (1845-50) the shop ran a ticket agency for people emigrating to America.
She pushed the children to go to school, university.
Managed to send her children to good schools in Ireland and France, Michael Joseph to university, and set up Tom in Tarbert.
It seems probable that her unmarried sister-in-law Margaret Rahilly helped run the shop.

"Mrs. Margaret Rahilly" is listed in [Griffiths Valuation, 1851] as follows:

Margaret dies, 1866:
She contracted lung tuberculosis c. Oct 1863 [GROI].
She died Sat 20 Jan 1866, Ballylongford, Co.Kerry, age 54 yrs [GROI]. Confirmed in [P102/29] and [P102/207(30)].
She is bur (without inscription) with her husband and brother in the "Mac Ellestrem" vault, Lislaughtin Abbey.
Their children Margaret and Dr. Michael Joseph were also bur there (without inscriptions).
The McEllistrems remembered that some Rahillys "came down from Dublin" to be bur there. The McEllistrems resented this. Michael McEllistrem (died 1930) used say: "I'll die a happy man if my affairs are settled and all the Rahillys are out of the tomb" (his father was also bur in the tomb but he himself got a new grave).
Michael Joseph and Margaret had issue: 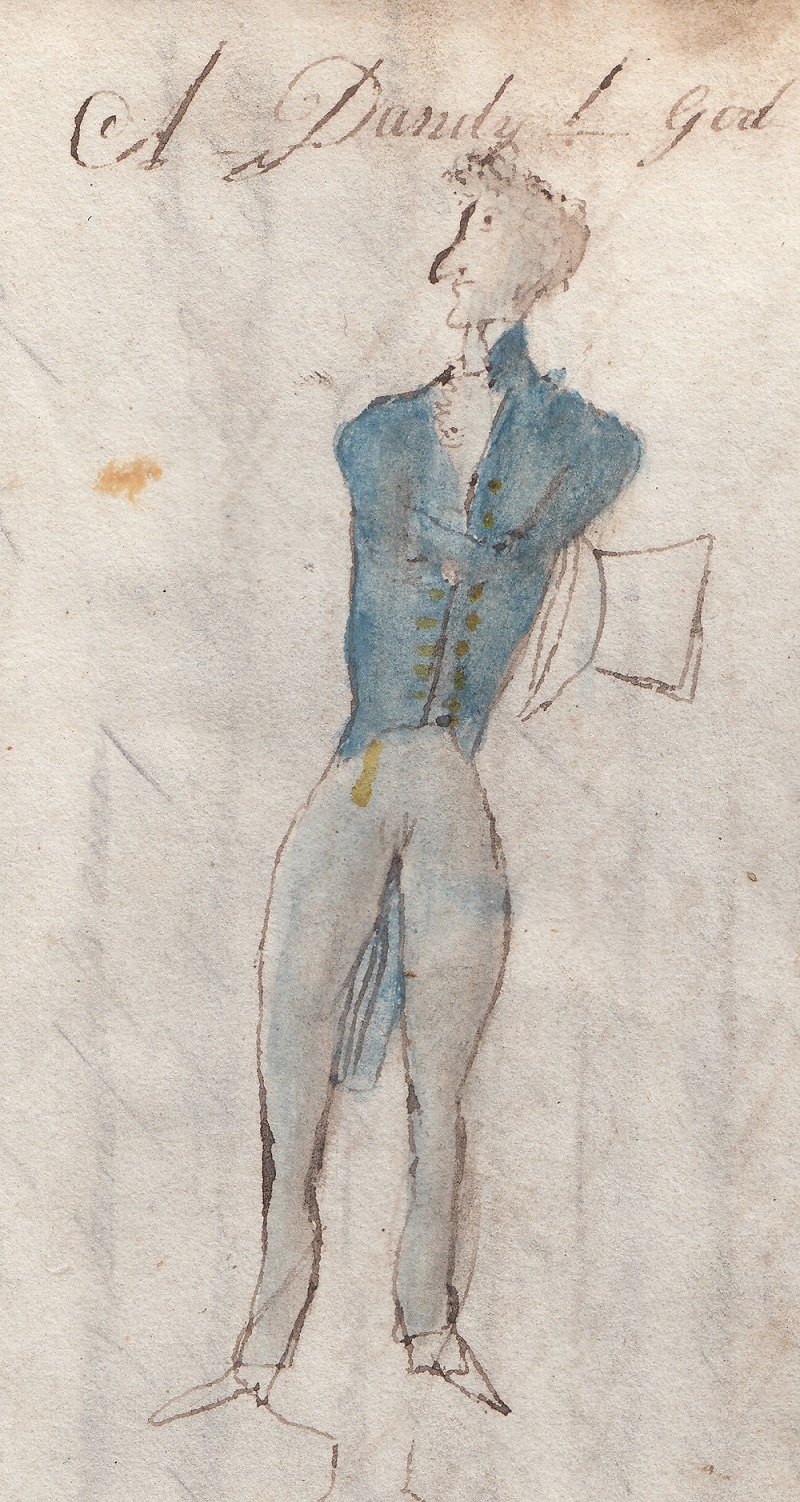 Michael Joseph Rahilly draws "A Dandy" in his 1832 notebook at Ballylongford.
See larger and full size. 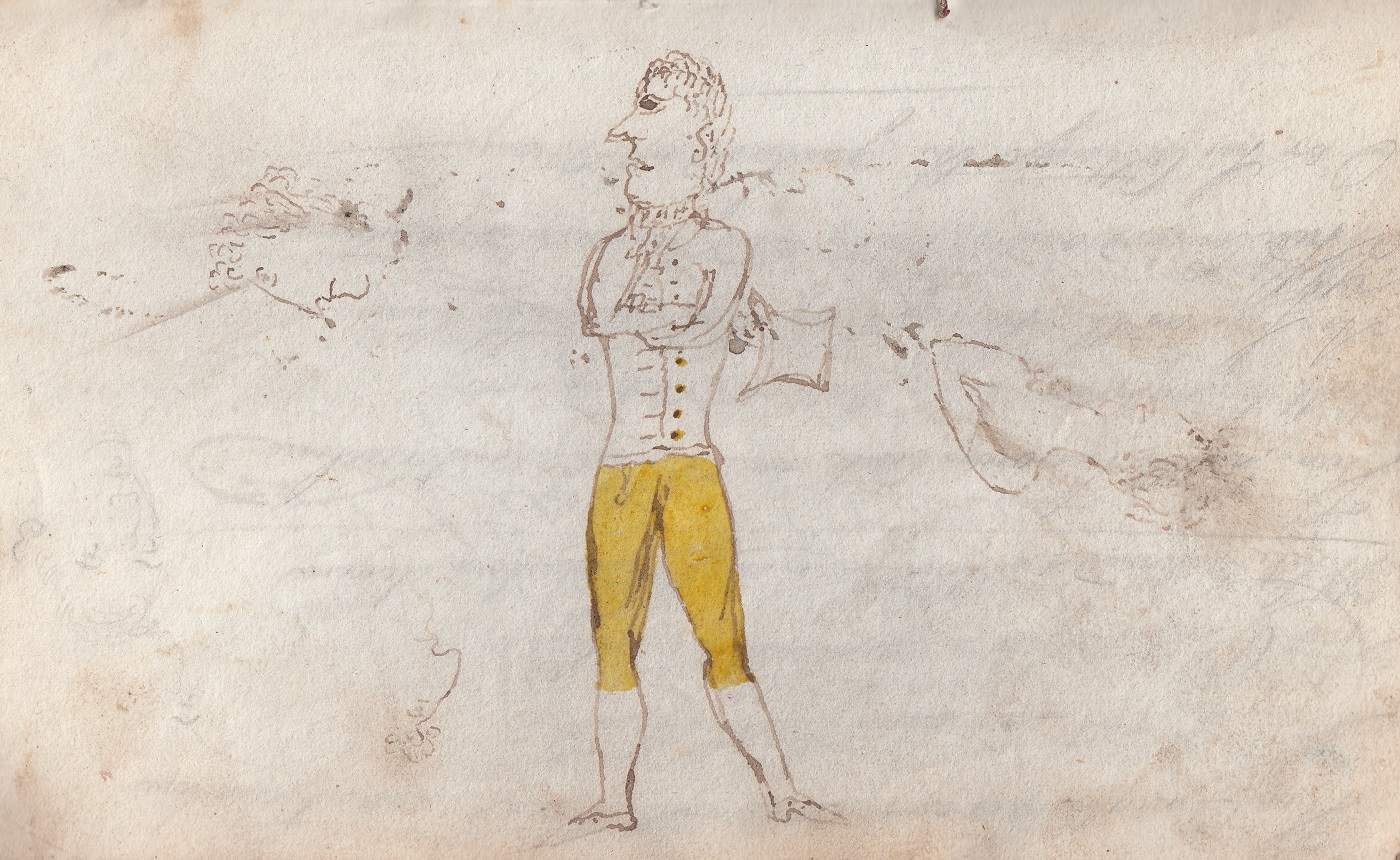 Another sketch by Michael Joseph Rahilly in his 1832 notebook at Ballylongford.
See larger and full size. 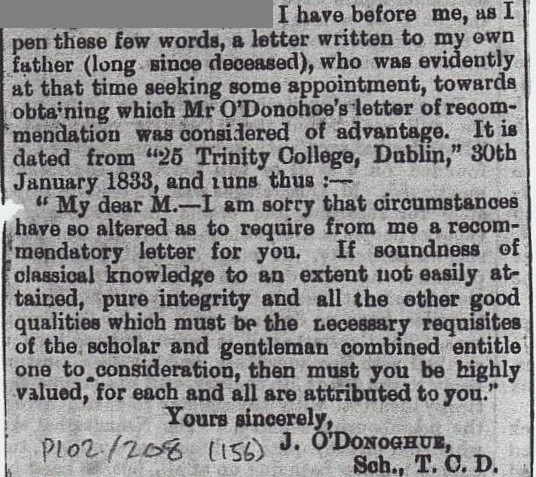 Transcript of the testimonial of 1833 from John O'Donoghue, "scholar, TCD".
As published in the newspaper letter of 1893 by Michael Joseph Rahilly's son.
See full size. 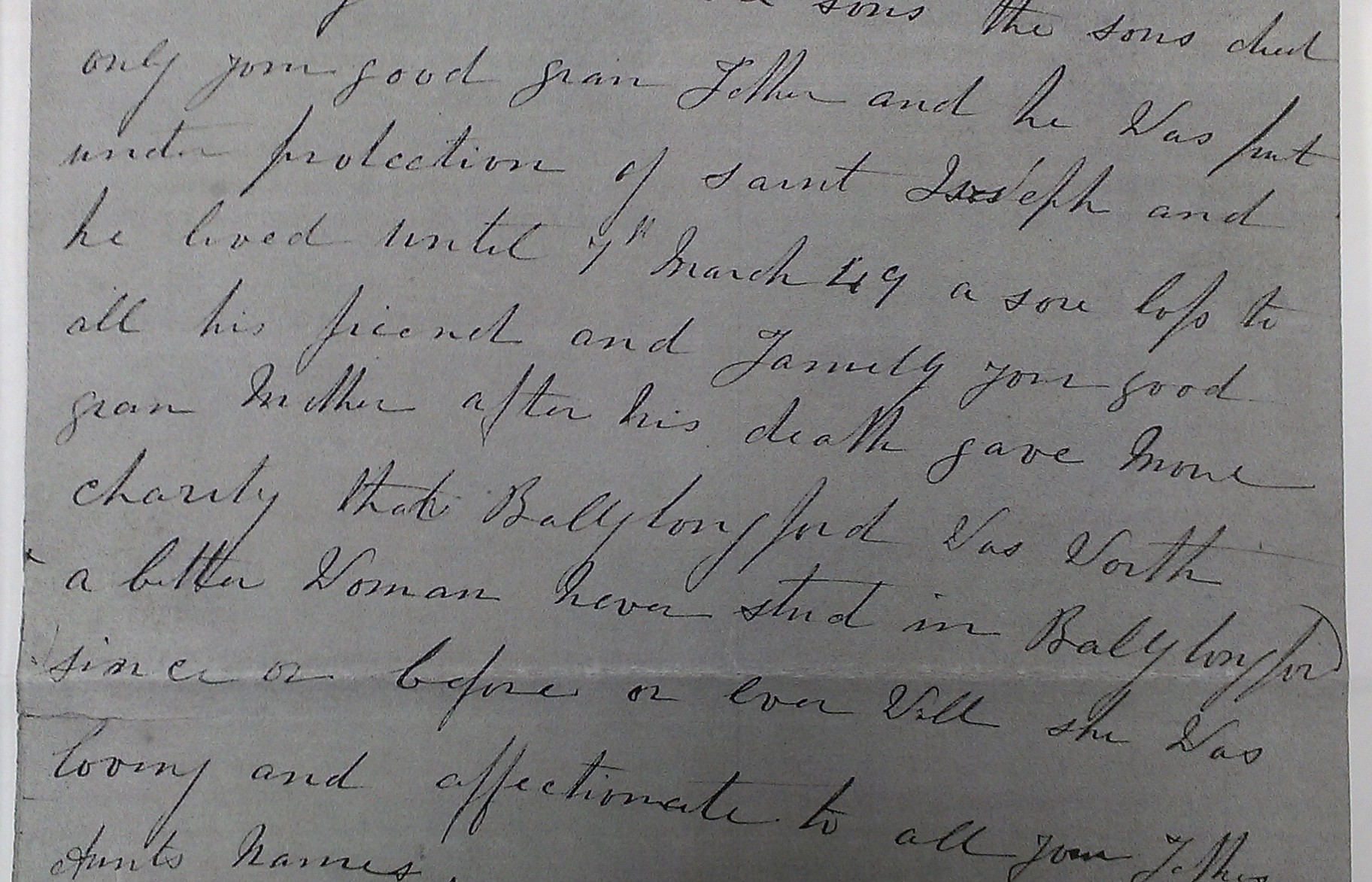 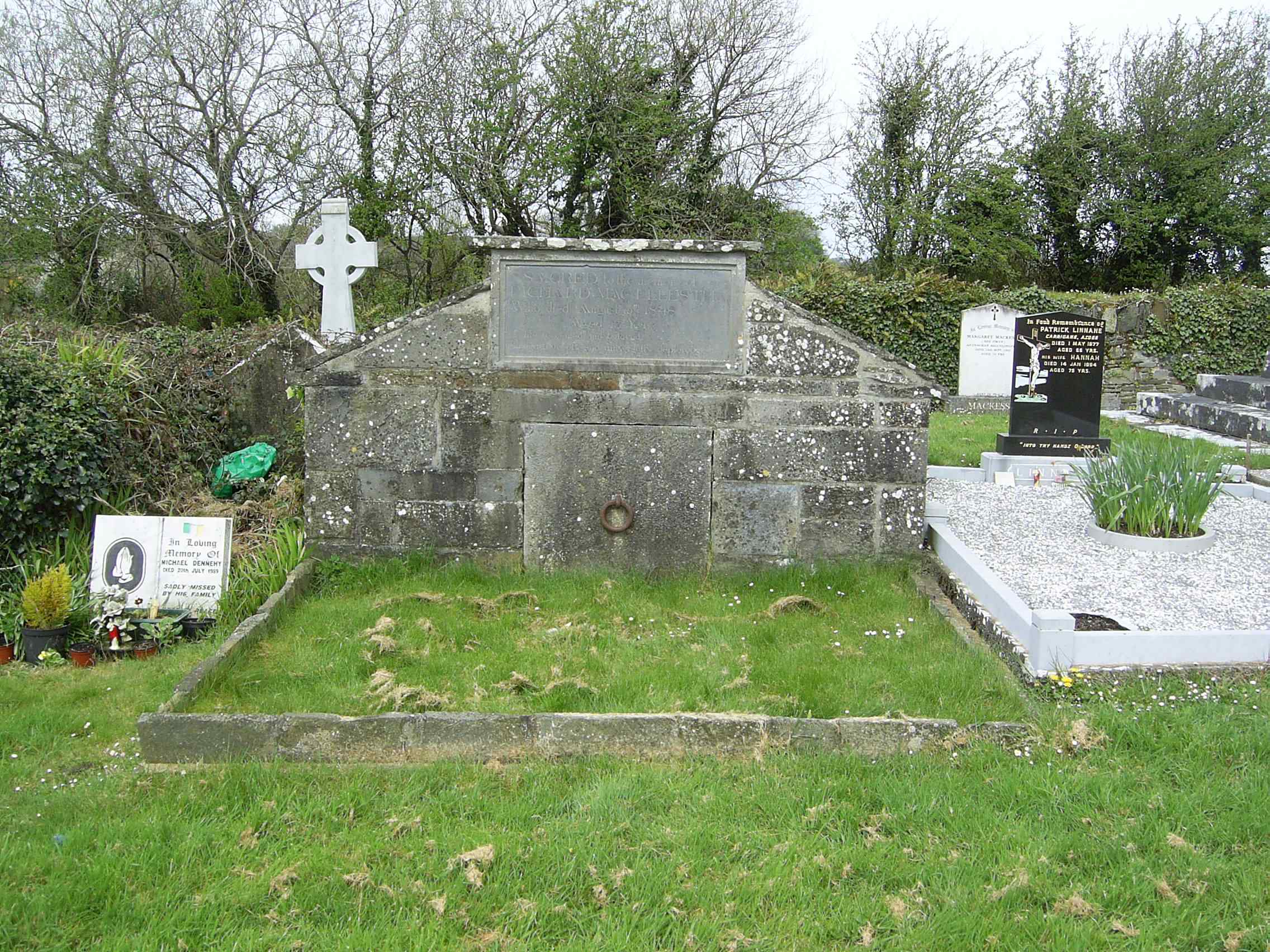