Richard Francis Blennerhassett,
Richard Blennerhassett, born 23 May 1772.
See Wikitree and thepeerage.
Mary Agnes Hickson in [Hickson's annotated par records, 1880] says he was called "Dicky the Goose".
As you might expect, "goose" was Regency slang for a fool.

He lived when young at father's house, Churchtown, near Killarney.
Richard Francis Blennerhassett of Churchtown witnessed [Deed, 1794].
He was a magistrate of Co.Kerry.
Letter of 1 Mar 1814 seems to say he has been a Magistrate for 19 years (i.e. since 1795).
Richard Francis Blennerhassett of Churchtown is party to his 1st cousin Richard Yeilding's marriage settlement in [Deed of Feb 1796].
Bill Jehan says he was JP for Co.Kerry 1796.
Listed as of Churchtown in his cousin's marriage settlement, May 1798.
Listed as of Blennerville, near Tralee, at marriage Oct 1798.

Duel with John O'Connell, 1813:
Richard fought a duel in Jan 1813 with Daniel O'Connell's brother John O'Connell (him age 40, O'Connell age 34).
[Letter from Richard Blennerhassett, Tralee, 26 Nov 1812] explains the story.
The background was the argument over Catholic emancipation. There was a riot about the issue in Tralee in August 1812. Richard said that he used his powers as a magistrate to call out the army to quell the rioting mob, and O'Connell used insulting language about him for doing so. Richard demanded a meeting to fight a duel. He says O'Connell repeatedly would not meet him under satisfactory conditions. After much argument, they met but were stopped by the Sheriff. At time of writing (Nov 1812) they had not actually fought.
They finally met to fight a duel with pistols on Tue 19 Jan 1813 at Crotto. Blennerhassett was supported by his friend Thomas Blennerhassett of Caherine [unidentified]. O'Connell was shot in mouth, seriously injured.
The duel is written about in:

Seemingly unabashed by the angry response in June 1814, Richard wrote further letters in 1814-1815 to Dublin Castle:

Richard Blennerhassett of Blennerville is party to [Deed, Feb 1816] with his father.
He wrote a number of letters in 1817 to Dublin Castle: 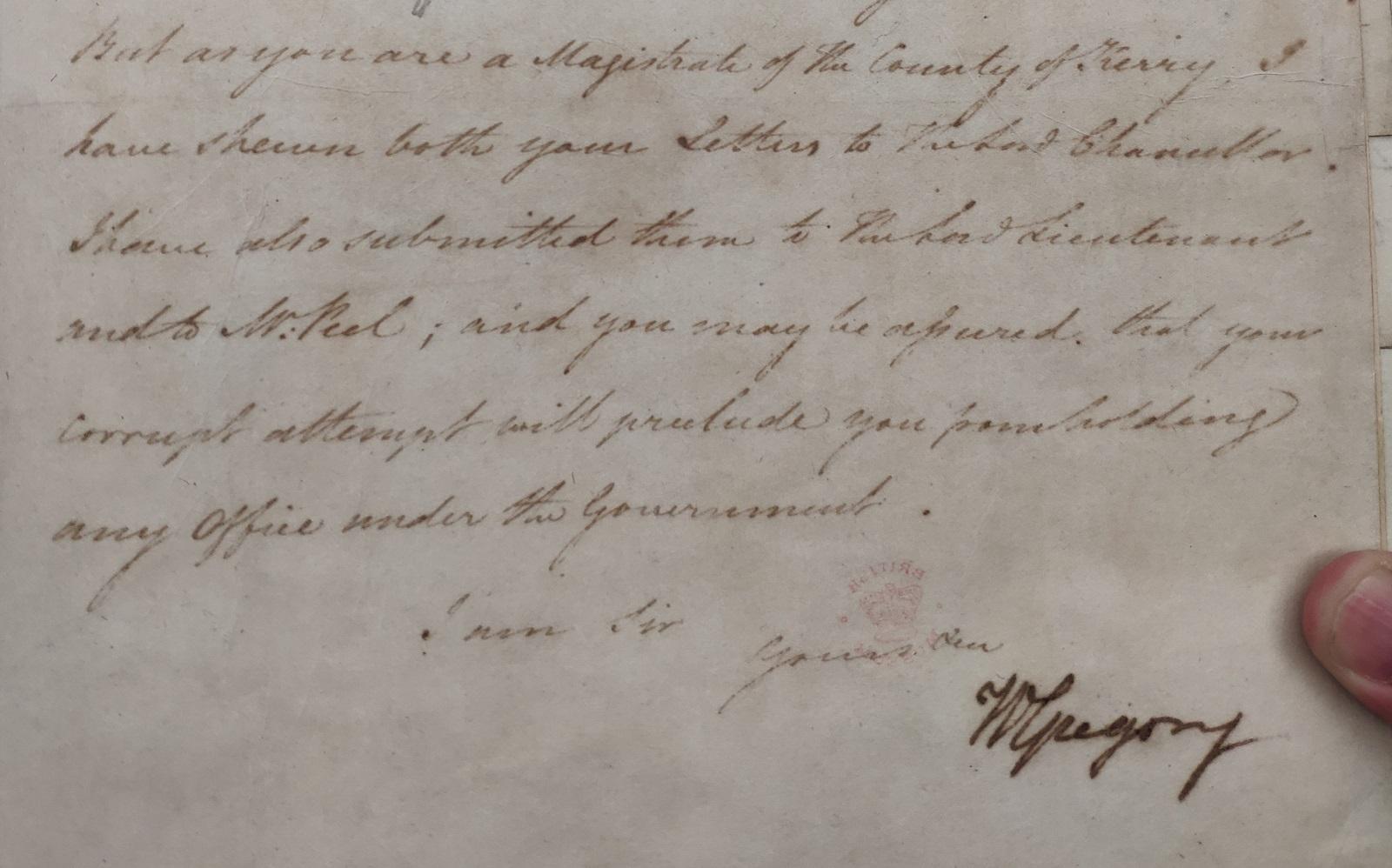 William Gregory, Under-Secretary for Ireland, accuses Blennerhassett of attempted bribery and says he will be dismissed as a Magistrate.
From letter on 6 June 1814. "you may be assured that your corrupt attempt will preclude you from holding any office under the Government."
See full size.
Image used with the kind permission of the British Library.

Richard Francis Blennerhassett writes in May-June 1817 from Westwood Lodge, Caherciveen, Co.Kerry.
He died at Caherciveen in Nov 1817, presumably at Westwood Lodge.
Where this was is uncertain.

Richard writes on 29 June 1817 from Westwood Lodge.
See full size.
Image used with the kind permission of the British Library.

The Observatory in Garranebane townland, SW of Caherciveen. From 1887 to 1913 map.
This Observatory is now called "Westwood House". See modern map and street view. See drone video.
However it is not the old Westwood Lodge. The OSI map shows this building did not exist on the 1829 to 1842 map.

The five entries for Westwood in [Tithe Survey, 1826].
They are beside the entries for Garranebane townland, Caher parish, which makes sense.

Correspondence of Robert Peel. [BL] Add MS 40181-40617.
Robert Peel was Chief Secretary for Ireland 1812-1818.
Letters are bound in volumes (with volume numbers). Each volume is given a Ms number, which is the BL reference (not the volume number).

The Peel papers have letters to and from Richard Francis Blennerhassett of Tralee in 1813-17.
Also correspondence with William Gregory, Under-Secretary for Ireland 1812-1831.
See catalogue.

Images used with the kind permission of the British Library.

Will of Agnes Denny