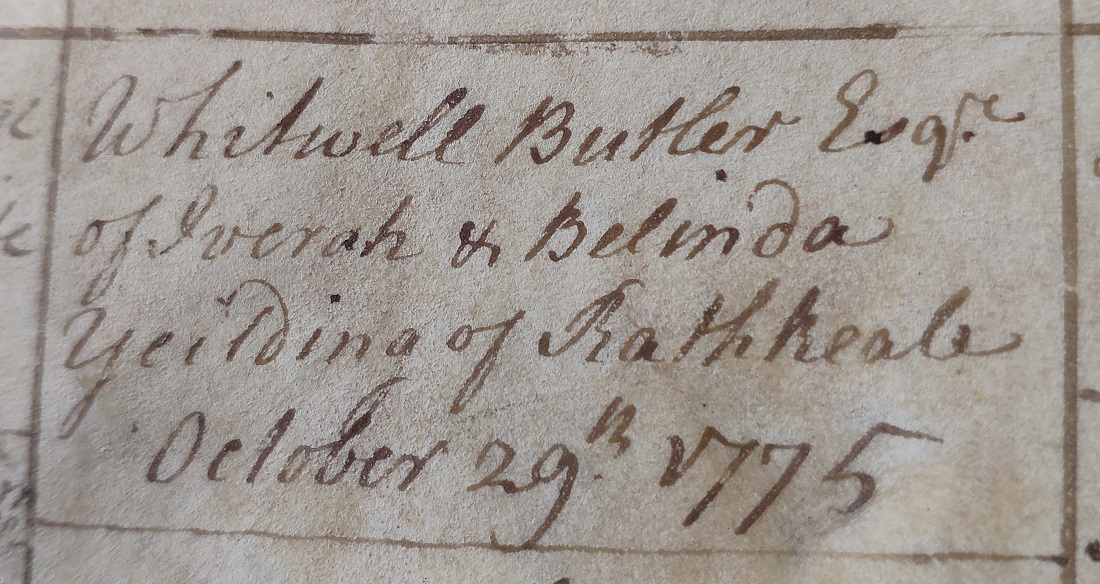 Marriage of Whitwell Butler and Belinda Yielding, 29 Oct 1775.
Rathkeale parish records, P.0764.01 at RCB. Courtesy of the Director of the National Archives of Ireland.
See larger and full size.

He was an officer in the British Army. He was a Lieutenant in the 86th Regiment of Foot (the one in existence in 1758-1763).
James Butler in 1932 says he has the Commission dated 27 Oct 1760.
Whitwell served with the 86th Regiment in Senegal, W Africa. (Britain had captured Senegal from France in 1758. The 86th Regiment served in Senegal in 1758-1763.)
86th Regiment disbanded 1763.
Whitwell is said to have been at one time an officer in the Royal Navy. This could be confusion with his son. Or maybe he transferred to the Navy after his regiment was disbanded. It seems he may have stayed in Senegal for a time after 1763, or at least kept property there.
There are papers about payment of rent on his house in Senegal, "let for use of Chief Justice", dates 1766-1774. His house was probably in the capital Saint-Louis.
He returned to Ireland.
He is listed as of Iveragh Peninsula, Co.Kerry, at mar 1775.

He mar 29 Oct 1775 [her age 17, him age 39] to Belinda Yielding [bapt 15 Apr 1758].
"Belinda" became a name in the Butler family.
He built Waterville House, Iveragh Peninsula, Co.Kerry. Probably built around time of his marriage 1775.
He apparently inherited the Waterville land from his father, and built a house.
He was appointed a Revenue officer in Co.Kerry.
James Butler in 1932 says he has the Commission as "Coast Surveyor and Watcher" for Tralee district, dated 18 Dec 1778.
Around 1780 he built Belville House, near Portmagee, Iveragh Peninsula, Co.Kerry.
Belville was a useful base to catch smugglers and revenue evaders in the Valentia Island area. It was a dangerous job.
He was a Captain in the "Kerry Legion" regiment of the Kerry Volunteers. See him listed in Munster Volunteer Registry, 1782, p.48.

Attacked by a mob, 1782:
In his work for the Revenue, Whitwell was attacked by a mob in 1782. See the story on pp.304-313 of [O'Connell, vol.1, 1892].
On 5 Sept 1782 he and his men raided a smuggling operation of Maurice O'Connell ("Hunting Cap"), the uncle of Daniel O'Connell.
The smuggling was apparently off the S coast of the Iveragh Peninsula. Butler set off back to Waterville, passing through Caherdaniel and over the mountain. The locals at Caherdaniel were angry at the operation being broken up and the goods seized. A mob assembled and went round the mountain and intercepted Butler and his men. They were attacked by the crowd and Butler nearly killed.
Afterwards, Butler accused "Hunting Cap" and his O'Connell relatives of being behind the violence. But it seems the mob acted on its own, since they profited from the smuggling too. (Though note the 1892 account is written by a relative of O'Connell.) The charges against the O'Connells were thrown out.

Whitwell dies, 1808:
Apparently he was receiving a pension as at 1808.
Listed at death as Captain of the revenue cutter, the Winder.
He died Aug 1808, at Waterville, age 72 yrs.
See notice in Limerick Gazette, 23 Aug 1808.
Whitwell and Belinda had issue:

Extract from tree of Butler of Waterville.
See larger.
From Kevin Dyke, who said in 2020 that this tree was prepared by "the late Lord Dunboyne".
This has a Pierce and Theobald as sons of Whitwell senior.

The Thomas Butler line is the line that inherited Belville House.
I call it as proved that Thomas Butler of Belville descends from the marriage of Whitwell Butler and Belinda Yielding.

Then DNA proves it:

So who is Thomas Butler?

Somehow a descendant of Whitwell Butler senior and his wife Belinda Yielding is: 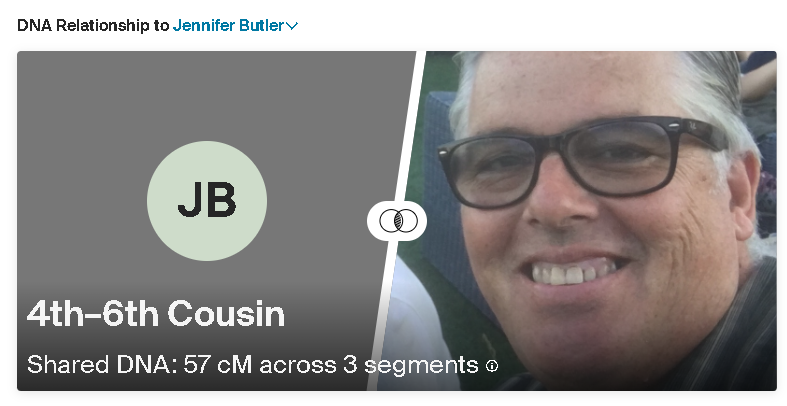 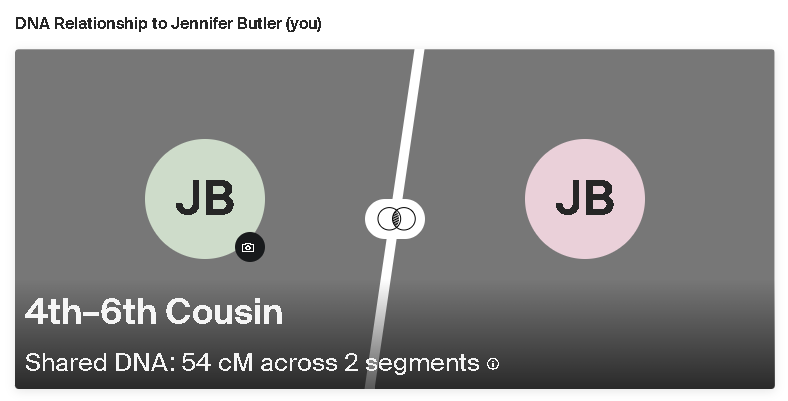 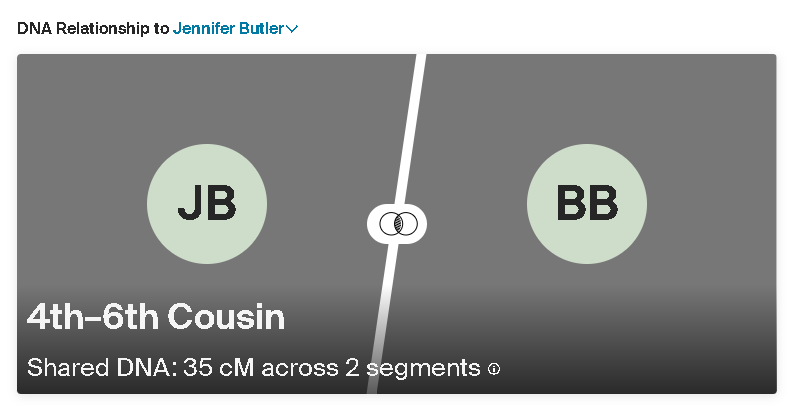 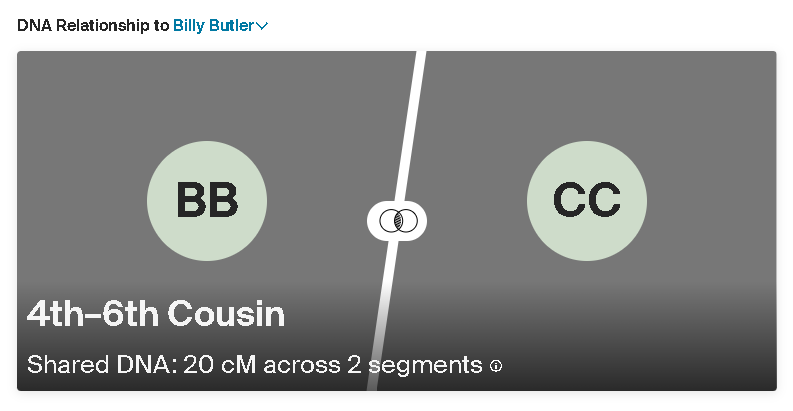 The proof that Thomas Butler of Belville descends from the marriage of Whitwell Butler and Belinda Yielding.
There are strong DNA matches between the following: And more matches not shown here (we only show the big ones):

Then DNA proves it:

So who is Tobias Butler?

Somehow a descendant of Whitwell Butler senior and his wife Belinda Yielding is: 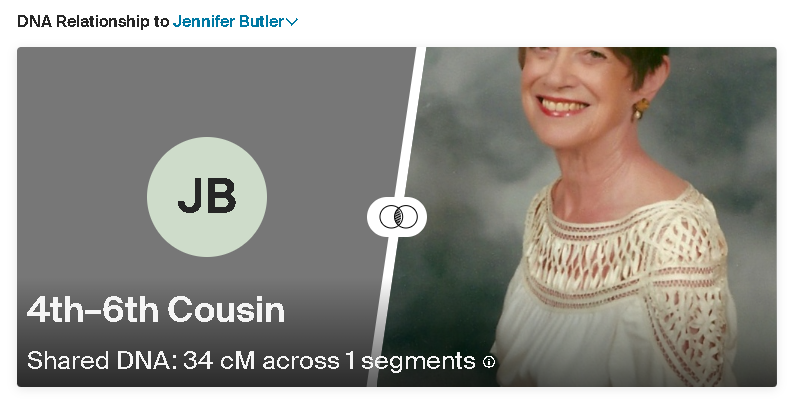 The proof that Tobias Butler descends from Whitwell Butler.
DNA matches between: