Thomas Orby Hunter,
of Croyland, Lincolnshire,
born c.1714.
Must be born in America (where his father was Governor of New York and New Jersey, 1710-1719).
Descendant of Edward III.
His mother died in New Jersey in 1716.

His father became Governor of Jamaica in 1727. He went to Jamaica with his father and brother in 1727.
His brother died in Jamaica in 1732.
His father's will, dated Jan 1733, left him extensive property at Croyland, Lincolnshire, and at Burton Pedwardine, Lincolnshire and at Chertsey, Surrey, and property in America and Jamaica, all provided that he did not marry a certain Mrs. Sarah Kelly, widow of Charles Kelly, of Jamaica.
His father died in Jamaica, Mar 1734. He returned alone to England.
He obeyed his father's condition (or perhaps his father was simply not up to date!) and inherited the property.

He was member of the Spalding Society after his father, elected 10th Oct 1734.
Ancestry says that "Thomas Orby-Hunter" subscribed to the 1736 edn of Poems on several occasions, by Stephen Duck.
MP for Winchelsea, East Sussex, 1741-1759.
He was stationed at Rotterdam 1746 as deputy paymaster for the English and Dutch troops.
He bought Waverley Abbey House, Surrey 1747.
Mary died 1740-1749.
Thomas had issue by 1st wife Mary:

He was living Tickencote, Rutland, in 1754.
Lord of the Admiralty, 1756-1763:
Thomas served as a Lord of the Admiralty Nov 1756 to Apr 1763.
He was on Government business in the Low Countries 1759. A diary survives from this time.
MP for Winchelsea, East Sussex, 1760 to death. (Not replaced until 1770.)
His daughter Kitty eloped with the married Earl of Pembroke in 1762. An illegitimate grandchild Augustus Reebkomp was born in Nov 1762.
Hunter River, Prince Edward Island, Canada, was named in 1765 after him.

Jacomina dies, 1791:
Her will dated 20 May 1791.
[Raymond Crawfurd] says she died 1791, age c.61 yrs, at her home in Bolton Street, Piccadilly (see map).
Will said she wanted to be bur Burton Pedwardine with her husband.
But [Raymond Crawfurd] says she was bur at St.George's Hanover Square, London.
Will pr 28 Feb 1795, Prerogative Court of Canterbury.
Thomas had issue by 2nd wife Jacomina: 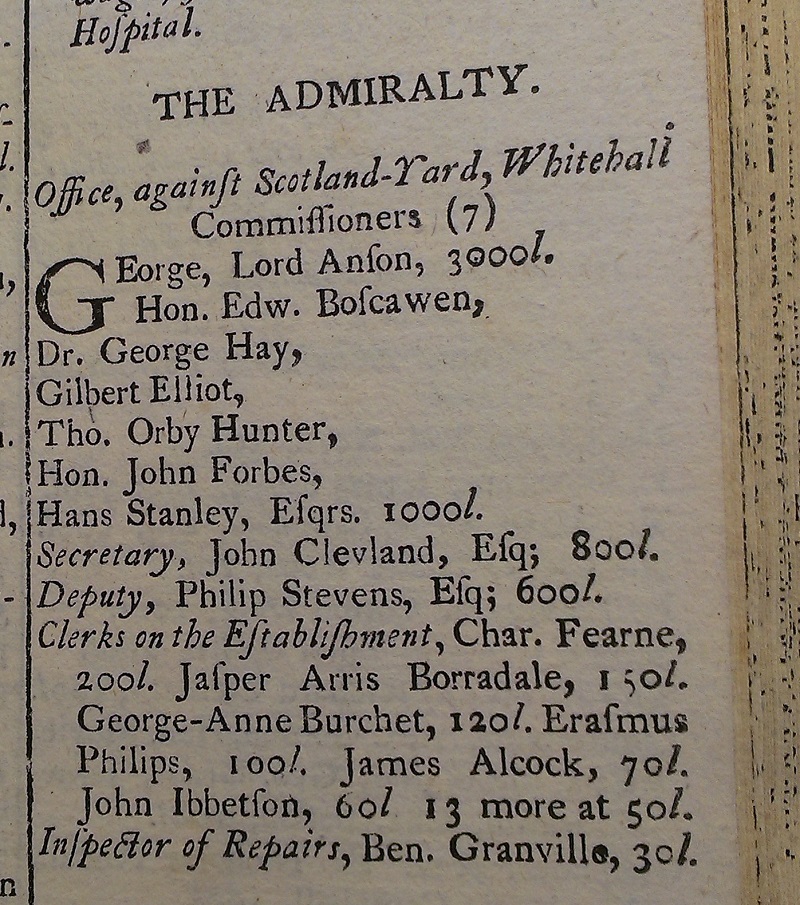 Listing for the Admiralty in [Watson's Almanack, Dublin, 1761].
Shows Thomas Orby Hunter as a Lord of the Admiralty.
See full size.