John Mangan,
bapt 17 Jan 1842,
of Gourbane, Shanid Lower townland, near Shanagolden, Co.Limerick.
He would be "John Mangan" who sp bapt of his nephew John Joseph Mangan 1873.
He registered his father's death 1882. Him living "Gourbane".
He inherited Gourbane 1883.
John Mangan, Shanid lower, listed in [Postal Directory of Munster, 1886].
He is farmer, of "Shanagolden" at mar.
He mar 23 February 1892 [him age 50, her age 36 or 31] to Margaret McCarthy [born 1856 (by death cert) or 1861 (by census age), NOT Sara].
She was born Co.Limerick, dau of Peter McCarthy, farmer.
She was from Crecora (SW of Limerick city), Crecora par, Co.Limerick (across the county from Shanagolden). John's sister Annie Mangan lived in this area.
She is listed at mar as "farmer", of Monaster, Co.Limerick. Monaster is just S of Crecora. See map.
The McCarthys owned a lot of land round Crecora.
The old McCarthy family home was Skehanagh House, SE side of Crecora. But the McCarthys owned other farms around Crecora. The McCarthys were said to own 700 acres in the area.
Margaret was aunt of Florence McCarthy [Florrie], a Republican activist and friend of Sighle Humphreys. See [Mac Eoin, 1980].
John and Margaret married at St.Patrick's RC church, Cork city. See mar cert from here. Mar wit by Thomas Nolan.

John registered his mother's death 1893. Him living "Shanid Lower" (Gourbane).
He was at funeral of James Nolan 1897, listed as nephew.
They are listed

at Shanid Lower in [Census, 1901], he is farmer. Two servants living with them.
"John Magner, Gourbane" (obviously him) is listed as nephew of Margaret Nolan at her death, Feb 1903. (Note that in Shanid district in 1901 census there is no one at all with surname beginning with Mag, while a search on surnames beginning with Man leads only to the Mangans.)
John is described as of Gourbane in his sister Ellen's will, June 1903.
He owned Gourbane outright 1906 (renting before then).
They are listed

Margaret dies, 1928:
She died at Gourbane, 8 Nov 1928, age 72 yrs, or maybe age 67 yrs.
See death cert from here.
John and Margaret are both bur in the grave of John's father Denis Mangan in Kilbradran graveyard.
John and Margaret had issue: 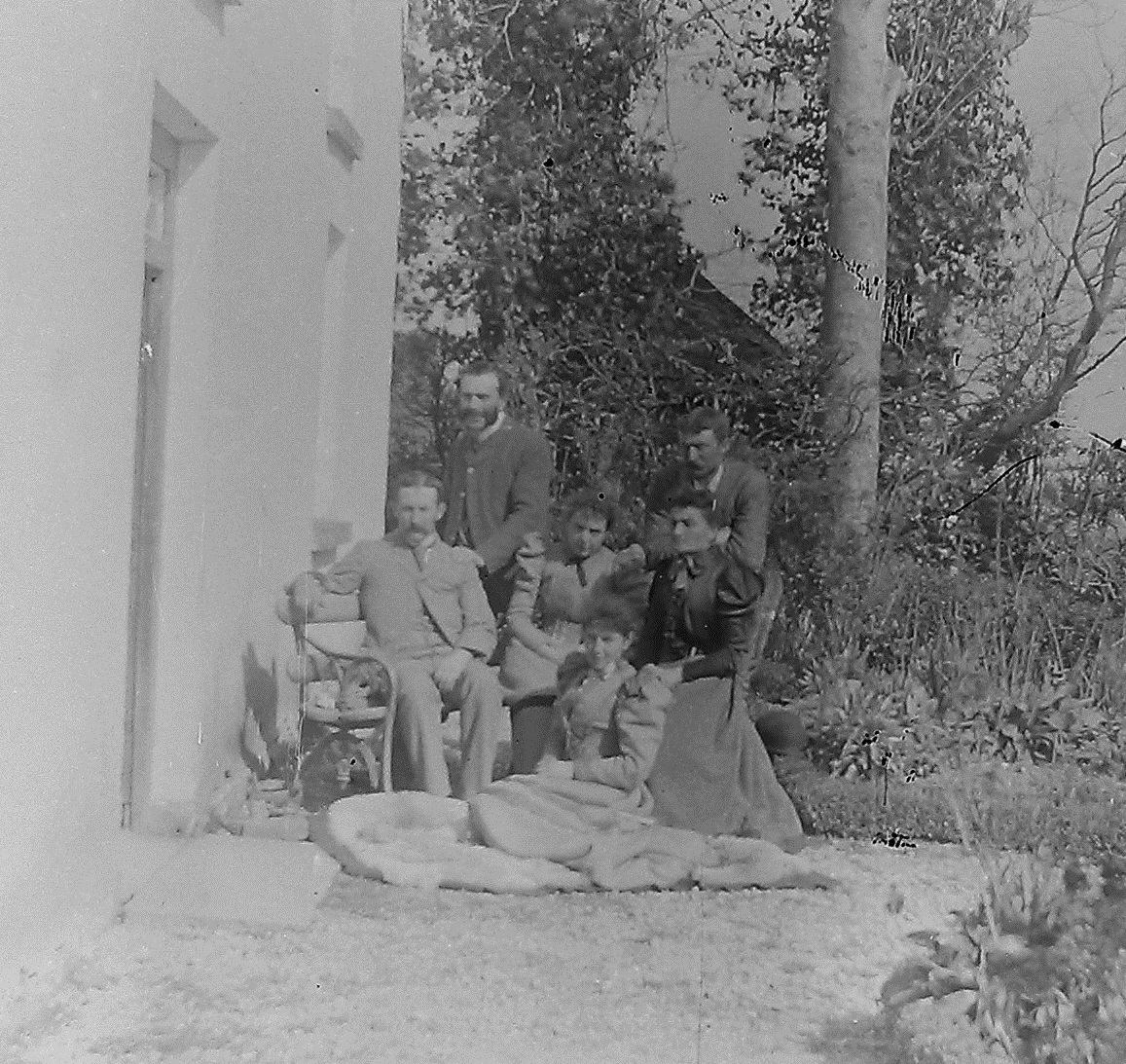 The front of Gourbane.
Looks like John Mangan (standing back LHS) and Margaret McCarthy (to RHS).
From photo probably of 1893-94.