Rowan Patrick Cashel [descendant of Edward III],
Rowan Cashel, or Cashell,
seems to have signed himself Cashel, but then his descendants are found again using Cashell,
born est c.1789.
He was educ Donnybrook, Co.Dublin.
He was an attorney, admitted to [King's Inns] Hilary term 1806, age over 16.

Rowan was living Dublin city at mar 1816.
He mar just 4 months after acquittal.
He mar 1stly, Tue 13th Aug 1816, at Silvermines church [Freeman's Journal, Mon 19th Aug 1816, p.3], also noted here,
to Alicia Lawrence [or "Elizabeth", or Eliza, only dau of William Lawrence, or poss. Laurence, of Silvermines, Co.Tipperary, the area where Cashel's family were originally from].
Marriage licence, Killaloe Diocese, 12th Aug 1816, security: "William Laurence".
He is listed as attorney, with office at 57 Capel St (near the Four Courts), Dublin, in [Pigot's Directory, 1820].
Alicia must have died between 1824 and 1828.
As at his 2nd mar 1828 Rowan was living Lissenhall, Co.Tipperary.
Rowan had issue by 1st wife:

He must be the "Rowan Cashell" who gave evidence on 6th day of the Criminal Assizes in Clonmel, Co.Tipperary, Sat 28th Mar 1829, about a dispute over some of his land at "Glenculloe" [unidentified], Feb 1829.
See report in Clonmel Herald, 28th Mar - 1st Apr 1829. (todo) See original.
A James Ryan was convicted of attacks and transported to Australia. The judge said he had no doubt that the intention of the attacks was to prevent the letting of these lands and the "object of which is to deprive Landlords of all power over their property and to enable the tenants in possession to keep lands on their own terms; but said his Lordship this practice must be put down - the law must be put in force to effect this desirable purpose."

Or "Lissen Hall".
Kilmore par, Co.Tipperary (N of Shallee and Silvermines, nearer to Nenagh).
Lissenhall was built by the Otway family in mid-18th century.
Rowan Cashel was living there as at 1828 to 1837. He rented it from the Otway heirs.
He apparently left by 1841.
Now in ruins. See modern satellite view.
See abandonedireland.com. (Includes 360 degree views.) 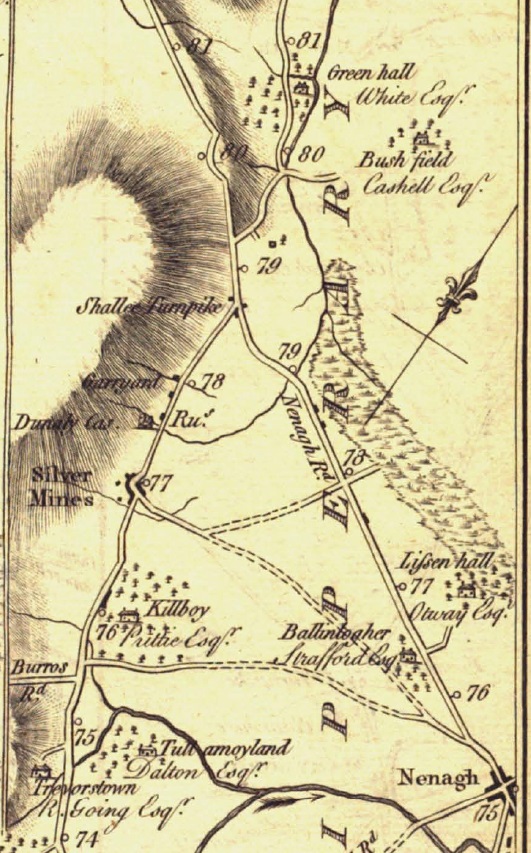 Greenhall and Bushfield and Shallee and Garryard and Silvermines and Lissenhall.
From p.98 of [Taylor and Skinner, 1777].

"I must deprecate, that this law should countervail the laws of the land, and that we unfortunately cannot oppose this despotic law."
- Judge Robert Day, in his outrageous summing-up to the jury, which led to Rowan Cashel's acquittal, 1816.