He is "Francis Cashell", Deputy Clerk of the Crown, mentioned in the trial of the Danish Silver Robbery 1731. See [Hickson, 1874]. Hickson also lists him as "Francis Cashel", Deputy Clerk of the Peace. Hickson, led astray by her transcription error of 1872, is wrong to think Francis is the brother of "George" who married Rowan.
Francis Cashel, Deputy Clerk of the Peace, certified the indictment of Thomas Hickson of Gowlane, who "seems to have conformed to Protestantism, to qualify himself probably for the appointment of Seneschal of the barony, which he held, but having betrayed his trust he was indicted under the name of Thomas Mac Robert Hickson of Gowlane for harbouring Tories and Papists". See "Hicksons of Fermoyle, Genealogical Notices" in [O'Kief, vol.5, p.455].
He must be "Francis Cashel" who subscribed to the book The Doctrine of Projectiles demonstrated and applied to all the most useful problems in practical gunnery, William Starrat, Dublin, 1733.

[Glin, 1972] thinks he may be the "Mr. Cashell" near Tralee, Co.Kerry, mentioned in letter from John Boyle, 5th Earl of Orrery to John Kempe, from Tralee, 27 Aug 1735. Extract: "I was wrong when I sent you Word, Magee's Farme was in Valencia: It is on this Side the Vast Mountain we cross'd over. His Lease is for ever, which makes me little sollicitous about a Dispute between him & Mr. Cashell for Land said to be mine. Tomorrow, I shall endeavour to settle some Disputes betwixt me & Colonel Hassett". (The latter is Col. John Blennerhassett, 1st cousin of Sarah Rowan's mother.)

Sarah died shortly before 1754. Her admin granted Nov 1754 to husband.
Francis fl 1754, described as of Tralee.
He may be "Francis Cashell", of Tralee, gent, who was admitted 1754 as Freeman of Fethard.
He may be "Francis Cashell" who is listed as lieutenant in the Kerry militia temp 1756, in a regiment of foot under Col. John Blennerhassett. See [Ó Snodaigh, 1971].
Francis and Sarah had issue: 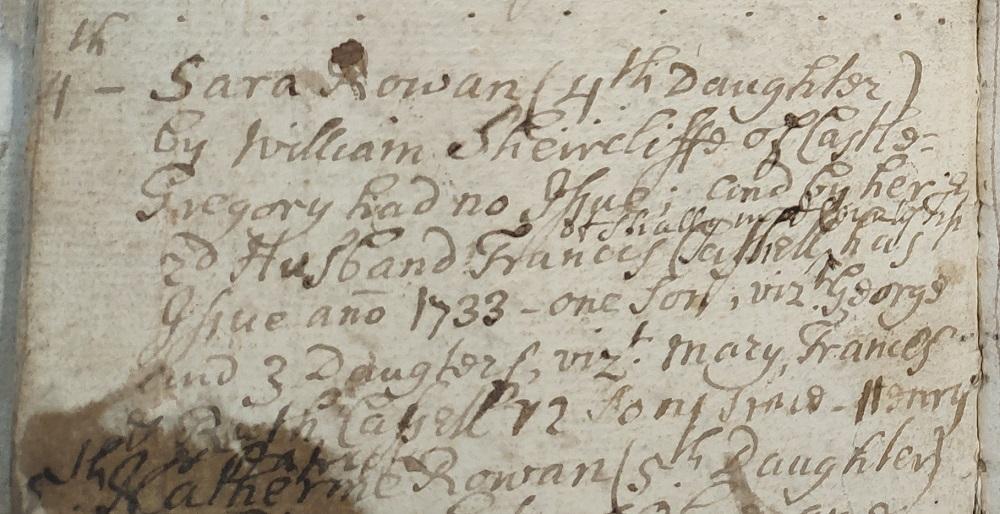 Transcript of the previous. From p.39 of [Hickson, 1872].
Black Jack's original Ms has the correct name, "Francis Cashell", for Sarah's husband. Hickson incorrectly transcribes this as "George Cashell". This "George" error is still circulating today.

Francis above may be "Francis Cashell" who appears on Yielding / Blennerhassett property at Tralee in 1751 and 1766. 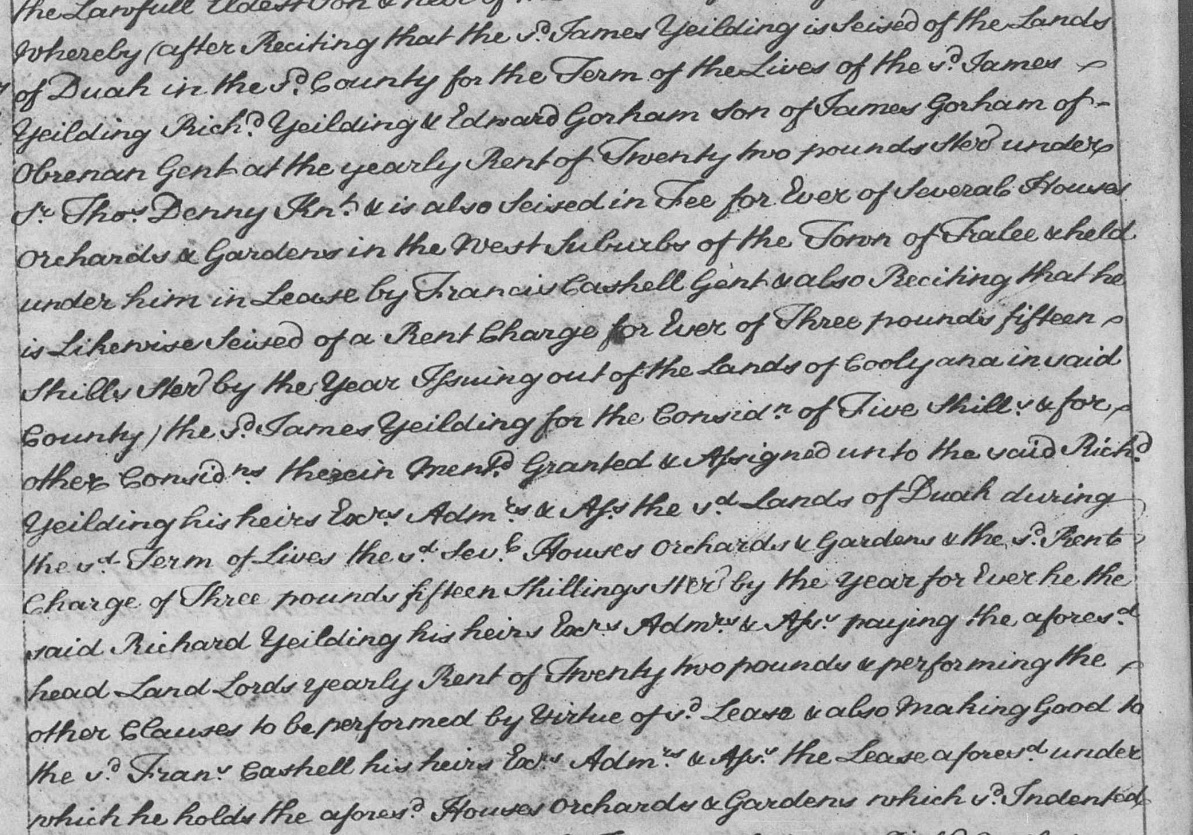 "Francis Cashell" appears in 1751 on the property at Tralee of James Yielding, uncle of Sir Rowland Blennerhassett, 1st Baronet.
Property on W side of Tralee.
From [Deed of 1751]. 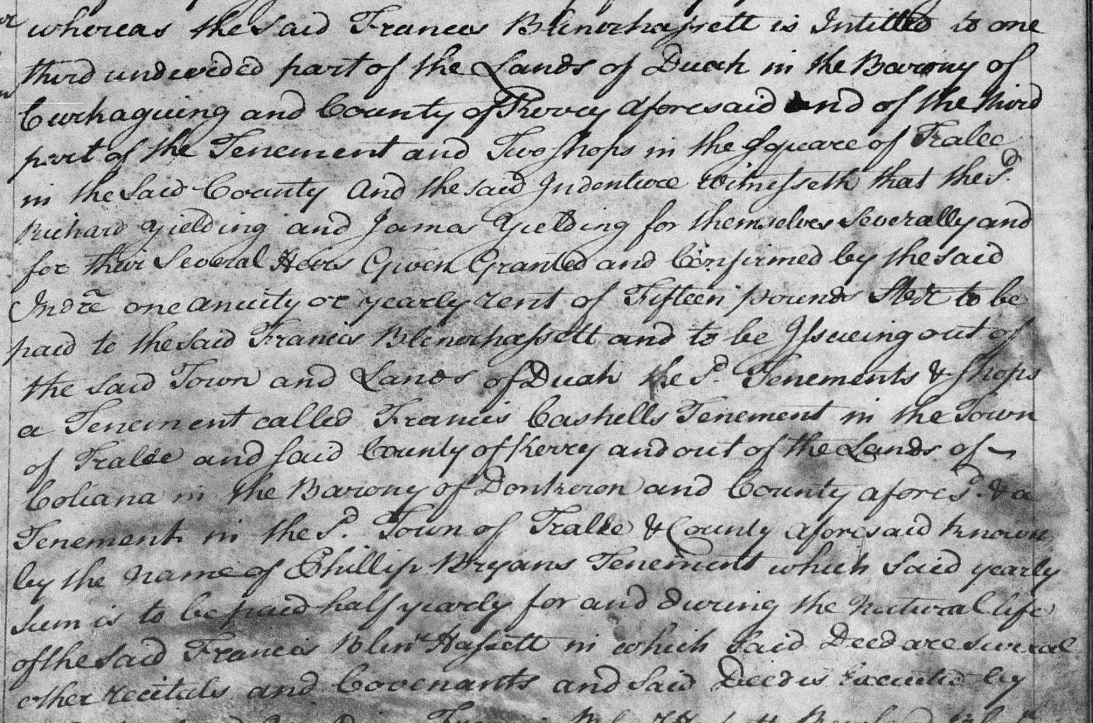 "Francis Cashell" appears in 1766 on the property at Tralee of Frances Blennerhassett (formerly Yielding), mother of Sir Rowland Blennerhassett, 1st Baronet.
From [Deed of Mar 1766].

Bushfield, Co.Tipperary, is in the same area as Shallee. This Henry is probably the brother Henry above, and then his children Francis and Sarah would be named after their grandparents: This Henry must be the same as the following, given the connections to Ballynevan, White and Greenhall.
Though our Henry is described as "of Bushfield" in 1763. Perhaps he only acquired it after 1760 and just before his death in 1763. Or perhaps this is his uncle Henry in the old home in Ballynevan, while the younger Henry is in Bushfield: [Betham abstracts] says our Henry definitely has a nephew George Cashell, but it thinks our Henry might be the son of this Francis below. I think this is someone else. Note that [Betham abstracts] only draws this as a dotted line (he is unsure):

The Registry of Deeds

Three Cashels worked together at the Registry of Deeds, Dublin: All three were said to be cousins of each other, but not proved.

Supposed to be cousins (see above).