Frank Flanagan,
"The Pope Flanagan", gentleman, born 11 Dec 1886.
He was educ with nuns at Banagher, Co.Offaly.
He then went to Clongowes boarding school (Jesuits), Co.Kildare.
He was at school with Fonso Carton.
He got the name "The Pope" at Clongowes because he was so religious.
He is listed

Went for priesthood:
He initially went for the priesthood. He joined the Jesuits 7 Sept 1904 (age 17). He was planning to become a priest on the missions.
He stayed for 3 years. Eventually decided wasn't suited, left apparently 1907.
His parents gave an inscribed monstrance to the Jesuits.

He didn't go to university.
He recalled: "I had no incentive to work. Father told me I need not take up a profession, as he had sufficient land and property to ensure my future."
He hunted with his brother The Bird around SW Co.Dublin (then open country, now all built over). Founder member of South County Dublin Harriers 1906. Also hunted with the Ward Hounds, and generally lived the high life on his father's money: "riding around his many farms on horseback to supervise his workers and hunting twice a week did not help me to realise that life meant more than idling my life away".

Friend of Gogarty:
He was a friend of the writer, conversationalist and Dublin character Oliver St.John Gogarty. Gogarty was said to be a cousin of Frank's friend Fonso Carton, but apparently this is not true.
When Frank left the Jesuits in apparently 1907, Gogarty is said to have put a notice in the social column of the Irish Times saying: "The Pope has gone to Avignon" (i.e. "The Pope" has left Rome and is pursuing a new path).
Through Gogarty, Frank met Joyce, but he was not a fan of Joyce or his writings. Note that Joyce's father was at Frank's mother's funeral 1910.
Frank stayed friends with Gogarty all his life. He would have stayed with Gogarty - not at the Martello Tower, where Gogarty lived only for a brief time in 1904 - but rather at Renvyle in Connemara.

After leaving the Jesuits he went to America. He was in the US around 1907-08.
There is a picture of Thomas Addis Emmet, "regards to F.C. Flanagan", 24th Dec 1907.
He met US President Theodore Roosevelt, "who kindly gave me a signed photo", dated 20th Jan 1908.
He stayed friends with his son Kermit Roosevelt.
A postcard May 1908 shows him living at Portmahon House.
His mother died 1910.
He worked as an insurance broker for a while, listed as such in Census 1911.
In [Census, 2 April 1911] he seems to be listed twice:

Bachelor life:
Frank was living Portmahon House in 1920s, with his father and brother Michael. Liam Cosgrave recalled the three of them there.
Like all his family, he was pro-Treaty and against De Valera. His memoirs blame De Valera for the Civil War, and admire W.T. Cosgrave for successfully founding the Free State.
He was friends with the opera singer Margaret Burke Sheridan around 1923. He may have been interested in her but it seems it didn't go anywhere.
The Flanagan estate was 489 acres in 1924 [Hannan].
"Frank Flanagan" was at George Dempsey's funeral 1924.

He was a very sociable person, and his memoirs are full of a list of interesting friends that he visited, dined with, and drank with.
Apart from those mentioned above, he was also friends with the writers Brinsley MacNamara and Liam O'Flaherty, and the journalist Thomas Kenny of Galway.
He also lists as friends the British journalist Hannen Swaffer, and the US Democratic politician Jim Farley.
He was a friend of the painter Jack B. Yeats. Frank bought some of his paintings very cheap when he was unknown, but unfortunately Nora didn't like them and they were sent back.

He was a friend of Frank Duff (founder of Legion of Mary).
Deirdre Flanagan said her parents still sometimes rode horses to church in Crumlin in the 1940s. By this time no one rode horses in Dublin centre, but some still rode in the suburbs.
The Flanagan lands of SW Co.Dublin were disposed of in Frank's lifetime as the suburbs expanded into what was countryside. It is not the best area of Dublin, but still worth a lot more than the lands were let go for.
The Flanagan estate was 207 acres in 1939 [Hannan].
The Flanagan estate was 97 acres in 1949 [Hannan].
Drimnagh Castle became vacant 1954. The school was apparently built on Frank's land, though he didn't own the castle itself.

This pub was at the corner of St.Agnes Rd and Windmill Rd. See location of red cross on 1887 to 1913 map. See 1911 census.
[French, 1997, p.81-82] tells a story of "The Pope" Flanagan riding into Crumlin with some friends to go to Mooney's pub. A local character called "Whack" minded his horse, and after a few hours drinking he tipped him a half-crown.
The pub is now modernised and called "The Hub" (The Shaw Arms).
See street view. See 2012 photo and other shot. 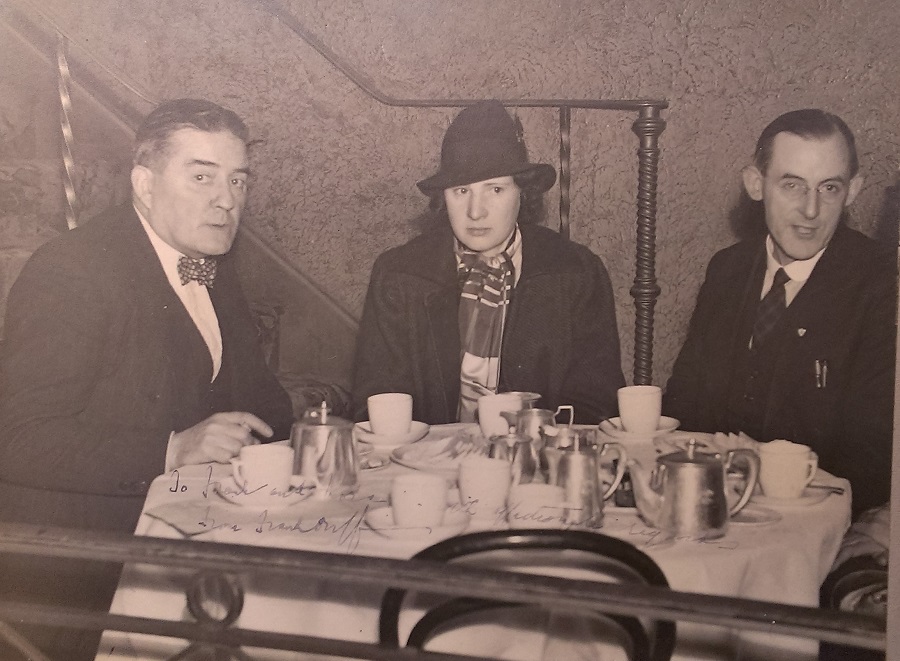 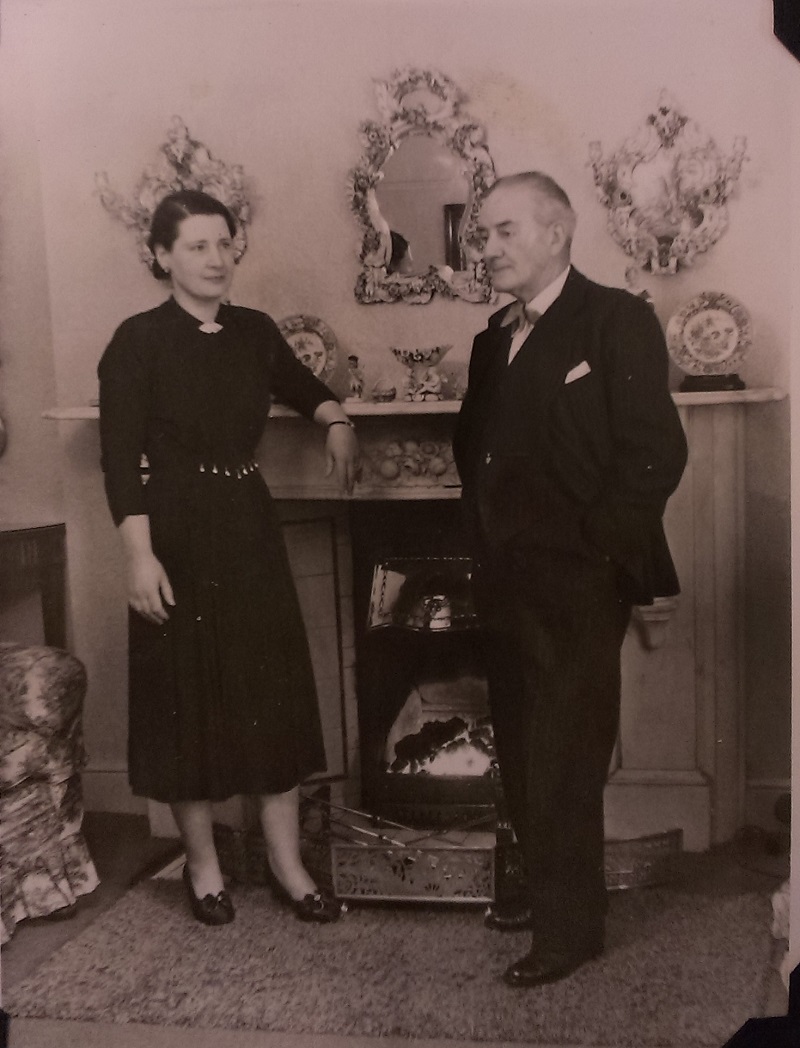 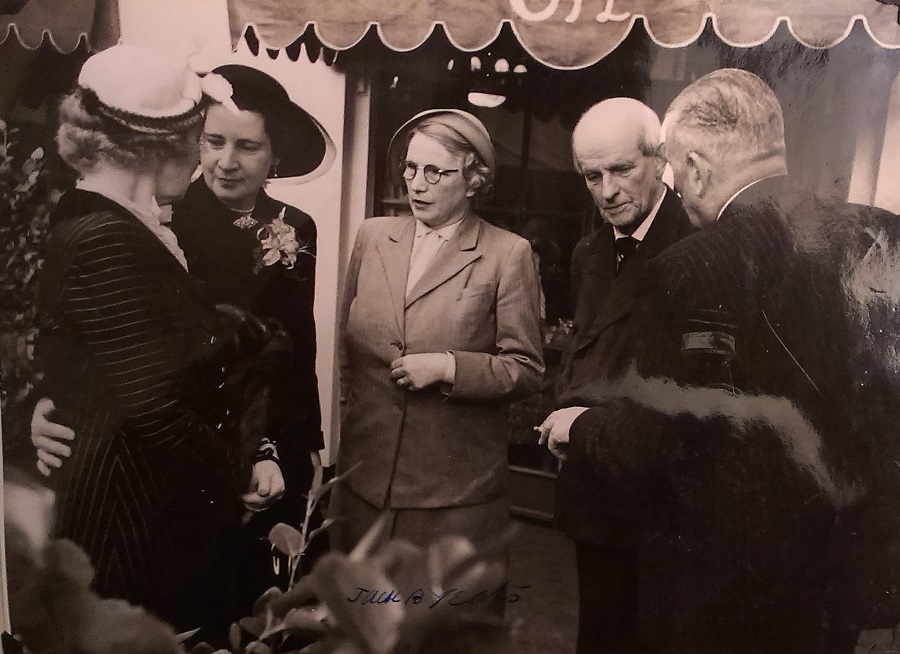 Photo of Frank Flanagan with his brother-in-law W.T. Cosgrave.

AI animations of old photos and portraits.
Made using Deep Nostalgia at MyHeritage.
AI animation of portrait of Frank Flanagan.

"Davy Byrne's in Duke Street, the Bailey Restaurant nearly opposite, and the underground Bodega in Dame Street are licensed tabernacles sanctified by the past attendances of people with names like ... the Bird Flanagan and his relative, the Pope. (Who will pretend that these are not ordinary surnames that can be borne by anybody?) All three still open their doors at ten o'clock and possibly shelter to-day the makings of a second fame ... The premises bear openly the marks of their departed guests, like traces of fresh stout found in a glass by a policeman after hours"
- "The trade in Dublin", by Flann O'Brien, The Bell, vol.1, no.2, Nov 1940, pp.6-15, [DCU] PER 941.5.
The legendary drinkers referred to are my grandfather The Pope Flanagan and his brother The Bird Flanagan.

"Any mention of Bird Flanagan makes me uneasy. He is one of three brothers who would be better had they remained in Turgenev. Characters such as these are to be found both in the Russian author and in Dublin's fair city."
- Oliver St.John Gogarty in [Gogarty, 1954, Ch.10].
The three brothers would probably be The Bird, Larry and Frank.

"To-day, I modestly invite knowledgeable readers to share with me the plan of producing an extended memoir of one who was comparable with Trojan Hector or Finn MacCool himself. I mean the Bird Flanagan with, perhaps, a supplement on his brother, the Pope Flanagan."
- [Myles na gCopaleen, 1962].