There is no known connection to O'Sullivan of near Listowel.

The O'Sullivan Bourse in Louvain

In 1699, Fr. John Sullivan set up a "bourse" (bursary) at the Irish Pastoral College in Louvain, Belgium, for his relations "of the second degree".
As a result, anyone who took up the bourse is suspected to be a relation of Fr. John Sullivan.
If one of our family took it up or was eligible, it would imply that Fr. John Sullivan is an ancestral uncle or ancestral 1st cousin of our O'Sullivans.

Reasons to think we are not connected to the family of the bourse:

Reasons to think we are connected to the family of the bourse:

Extract from [Pierce, 1957] with the story that our Hickies were entitled to the Louvain bourse.

O'Sullivan Mor (the family of the O'Sullivan Bourse in Louvain)

The "O'Sullivan Mor" family of the Dunkerron area, near Kenmare, Co.Kerry, are the ancestors of the family of the bourse.
[Prendergast, part 4, 1899] shows Fr. John Sullivan's branch starting as follows:

An ancestral line was made out in 1912 for Fr. John Ring which shows the claimed link between Fr. John Sullivan of Louvain and Eugene Sullivan of Carhoomeengar near Kenmare.
The line was apparently worked out from oral tradition in 1912.
On the basis of this line, Fr. John Ring successfully claimed the O'Sullivan Bourse to be educated at Louvain.
The line as published in [De Rís, 1997] is as follows.

It does not seem very convincing, for the following reasons:

The original 1912 tracing for Fr. John Ring.
From [De Rís, 1997].
This is the whole thing. There are no further details. No dates or spouses or places or other details.

Our family (O'Sullivan of Meentoges)

Our family are not from the Kenmare area but rather from E of Killarney. Our family starts with:

Our family (O'Sullivan of Meentoges, family of Fr. Mark Sullivan)

As discussed above, it has been suggested that this family is related to the family of Fr. John Sullivan of Louvain but there is no clear evidence. 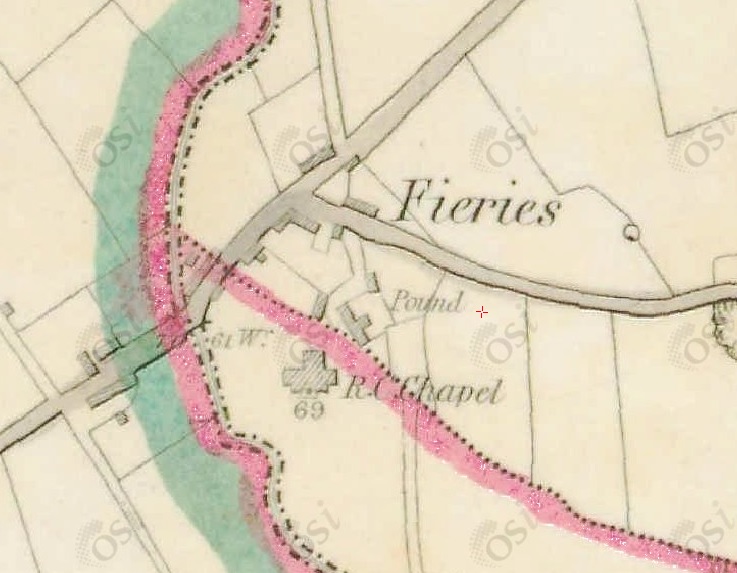 [McCarthy, 1993, p.105] apparently says that Eoghan Rua O'Sullivan was "born of a family that migrated from the Templenoe area". Templenoe is the parish to the W side of Kenmare (see old map). Same area as both "O'Sullivan Mor" of Dunkerron and Sullivan of Carhoomeengar. 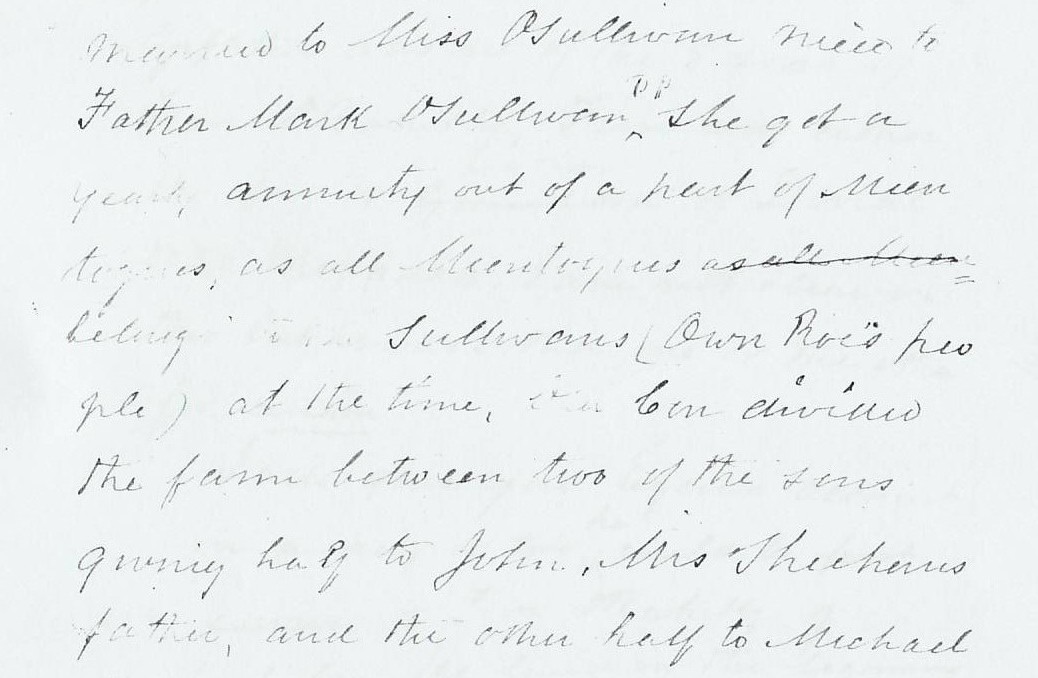 Extract from Michael Warren's letter of 1906 [P102/207(4)].
He meets Julia Sheehan and she says our O'Sullivans are related to the poet Owen Roe O'Sullivan.

[King, 1912] says that our Fr. Mark O'Sullivan was granduncle of "the late" Marcus O'Sullivan of Firies.
Note that these Sullivans are apparently of Firies, and they have middle names "Mark" and "Marcus".
Donation Drive