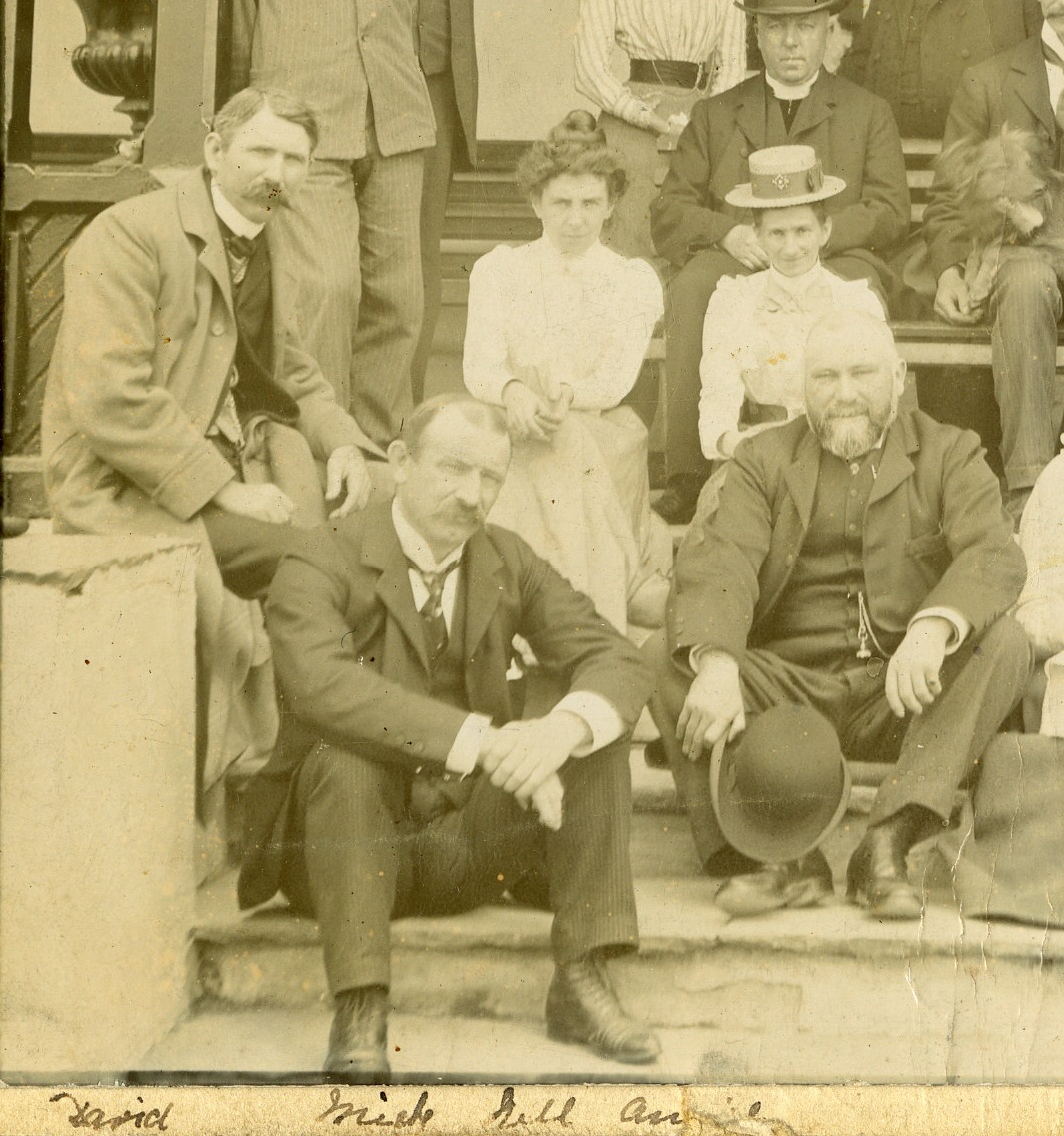 This must be Mick Humphrys (front) and his wife Annie (RHS) marked on this group photo of c.1900.
Also marked are Dr. David Humphreys and his wife Nell.
This is [P106/474].
Most of the people in the photo are unidentified. This does NOT look like Quinsborough.
See wider and full size.

He mar 2ndly, 26 February 1919, to Angela O'Shaughnessy [born 1880].
She was dau of Thomas O'Shaughnessy, "salesmaster".
Looks like she was sister of his 1st wife.
They mar at St.Mary's RC church, Lucan, Co.Dublin. See mar cert from here. She is living Allenswood, Lucan.
Marriage conducted by Fr. John Coffey. Mar wit by Mick's nephew Edward Lloyd (who had worked with Mick).

Pub at 81 Dame St, Dublin:
Mick then owned and ran a pub at 81 Dame St, Dublin, that is now called "The Oak".
It would have been called Humphrys' pub when he ran it.
"Michael Humphrys" listed there in [Thoms] from 1923 on (still called "Humphrys" pub after his death).
His surname, spelt "Humphrys" (the old way), is in a tiled floor at the door of the pub, dating from c.1923. He is usually "Humphrys" though some records have "Humphreys".
He moved to 81 Dame St think in 1922 or earlier, because when his nephew Dick Humphreys first set up in business as O'Mara's Rubber Co., by agreement dated 9th Oct 1922, he located at 79 Dame St, two doors away from where his uncle already was.
He was close to his brother Dr.David's family, but sadly they fell out over politics over the Civil War (1922-23). Mick was Free State, his brother's family were strong Republicans.
Apparently the top part of 81 Dame St was destroyed during the Civil War, had to be re-built.
Mick is listed as having a separate residence to the pub.
He is listed as living 29 North Circular Rd in [Thoms] from 1923 on.
However his grave says he died "at his residence" 81 Dame St.
He used to hunt with Langans.
[Mary Frawley, née Humphreys] remembered a story that Mick "saved a child" from the Proselytisers (Protestant missionaries who offered food to the Catholic poor if they would convert). Some Catholic organisation presented him with a watch.
He might be "M. Humphreys" who was present with other vintners at Alderman Flanagan's funeral 1931.

Angela kept the pub running. She continued to live at 81 Dame St.
81 Dame St is still called "Michael Humphrys" pub in [Thom's, 1938].
She would be "Mrs. Michael Humphreys" who sent message of sympathy at Nell's death 1939.