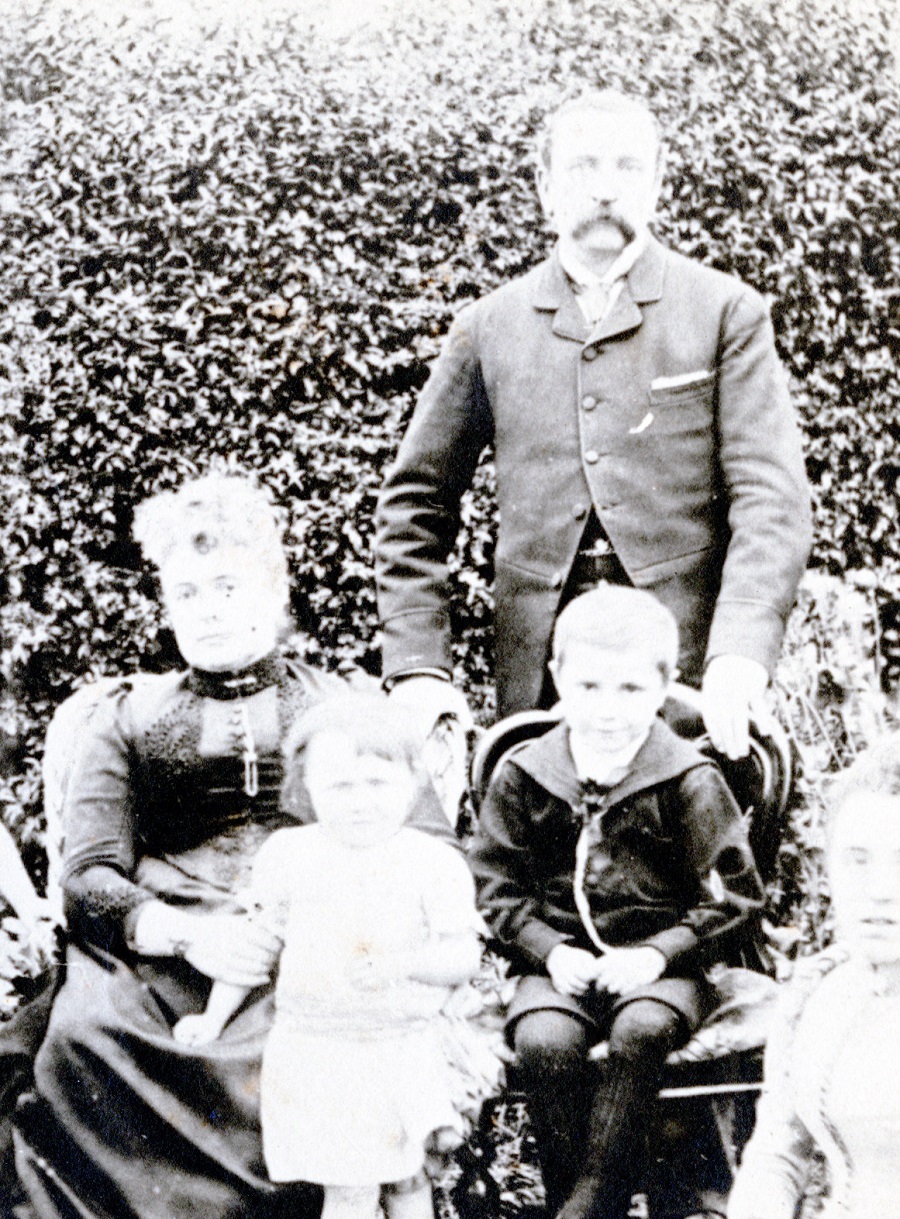 Thomas Francis Rahilly and Julia Curry and some of their children.
Photo 1891. Detail from this photo.

Thomas Francis Rahilly,
Tom, born 8th Jan 1849, Ballylongford, Co.Kerry,
NOT educ St.Michael's College, Listowel (founded 1879),
think NOT educ Blackrock College (think both of these are confusion with his son Thomas Francis).
In a tribute to him at Listowel Petty Sessions in Feb 1899, Gerald McElligott J.P. recalled Rahilly's "remarkable intelligence which he said manifested itself even at the beginning of his schooldays when he actually edited a little nursery newspaper of his own".
He went to St.Munchin's seminary in Limerick to study for the priesthood, there as at 1865 (age 16). Found had no vocation, left it [O'Rahilly, 1991].

His mother died Jan 1866.
He went to America Tue 27 March 1866, according to his brother Richard in [P102/29]. This was shortly after end of the American Civil War.
Wrote letter to his brother Richard, from Trout St, Harrisburgh, Pennsylvania, Aug 1866 (him age 17): "My dear old Dick ... I am just after getting up after last night's fun. I had a jolly good night at a ball, lots of the handsomest girls I ever saw. .. Many's the time I wished I had you with me here, and many's the time I think over the great smokes we had together. .. I'm entirely my own master NOW. Marlo tried to keep me down but he saw it was no good, so he gives me plenty of pocket money now. I am as happy as a king. .. Half past three I am just after breakfast". He says he is about to have a smoke and an iced champagne "to settle my stomach .. now don't show this letter to Mama or she might write to Marlo about me and then he'd show me the doors. She does not know what a place this is at all and indeed it would not be pleasant to" [tell her].


Thomas Francis worked for few years in Rahilly business in Ballylongford.
Then moved to oversee family's business interests in Tarbert, Co.Kerry (an off-shoot of the original business in Ballylongford).
Aodogán speculated in 1986 [P102/548(23)], that Thomas Francis was in the RIC, maybe in Longford, and he then states this in [O'Rahilly, 1991].
But this is clearly confusion with his father. And Longford was just speculation to explain why some of his children and his sister's children went to boarding school in Longford.
He is not found in [RIC records].

Thomas Francis dies, 1899:
He died at his house, The Square, shortly before midnight, Sat night, 25th Feb 1899, age 50 yrs, after a short illness.
Baby Ena (born Dec 1898) was sick at the same time. Bernadette Griffin was later told by an aunt that Julia asked God to take the baby but not her husband, but her husband said no, he would rather that he died than his daughter Ena.
Funeral Mon 27 Feb to Ballylongford, bur Lislaughtin Abbey, "in the family vault in the Abbey".
He is incorrectly listed as "solicitor" at dau Ena's marriage 1922.
See mass card in [P102/42].
Richard and Tom both now dead, Julia left a widow with 13 children, age 0 to 26. Wonder how she managed to pay school and university fees after this.

Julia left the house on The Square, Listowel in 1899 (according to plaque on house). Gone by census 1901.
Though note Richard Henry's dau was born on The Square 1904 (probably in different house).
Julia and the younger children are listed

in [Census, 1901] as living in Ballybunion, Co.Kerry. All listed as "Rahilly", they have 1 servant living with them. They seem to be in the house beside Bingham's pub and hotel, Ballybunion.
Also living in Ballybunion at this time was Tom's 1st cousin Marianne McEllistrem, who had recently separated from her husband.
Julia went to Dublin, think 1906, think NOT 1909.
Cecile's entry in [Beathaisneis] says she was in Dublin by 1906.
Julia lived 66 Botanic Rd, Glasnevin (NOT 68 Botanic Ave), listed there in [Thom's] 1909 and 1910. Listed as "Rahilly".
Children all born "Rahilly", but all changed to using "O'Rahilly" in the 1910s, following T.F. and The O'Rahilly.
See entry 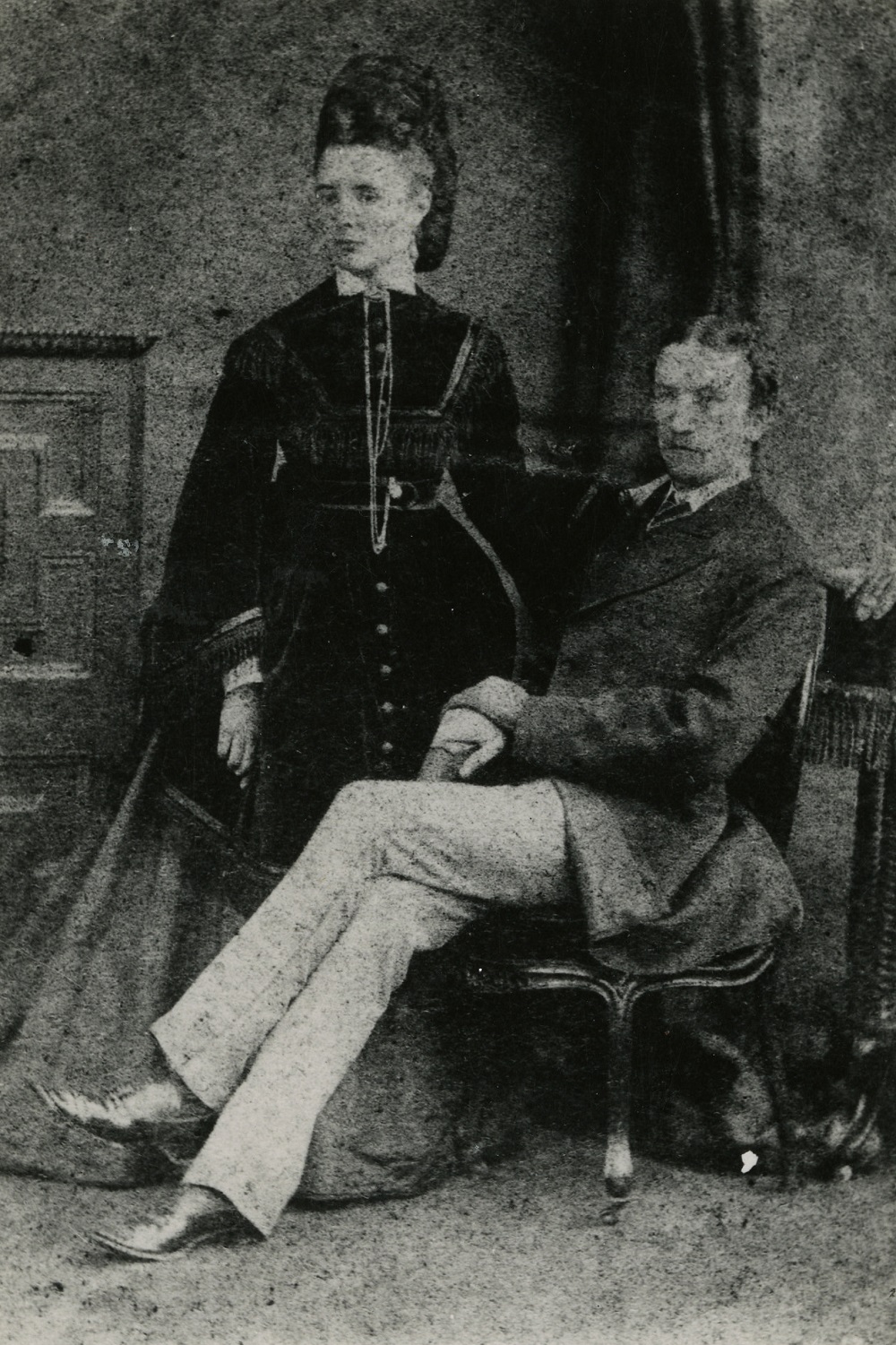 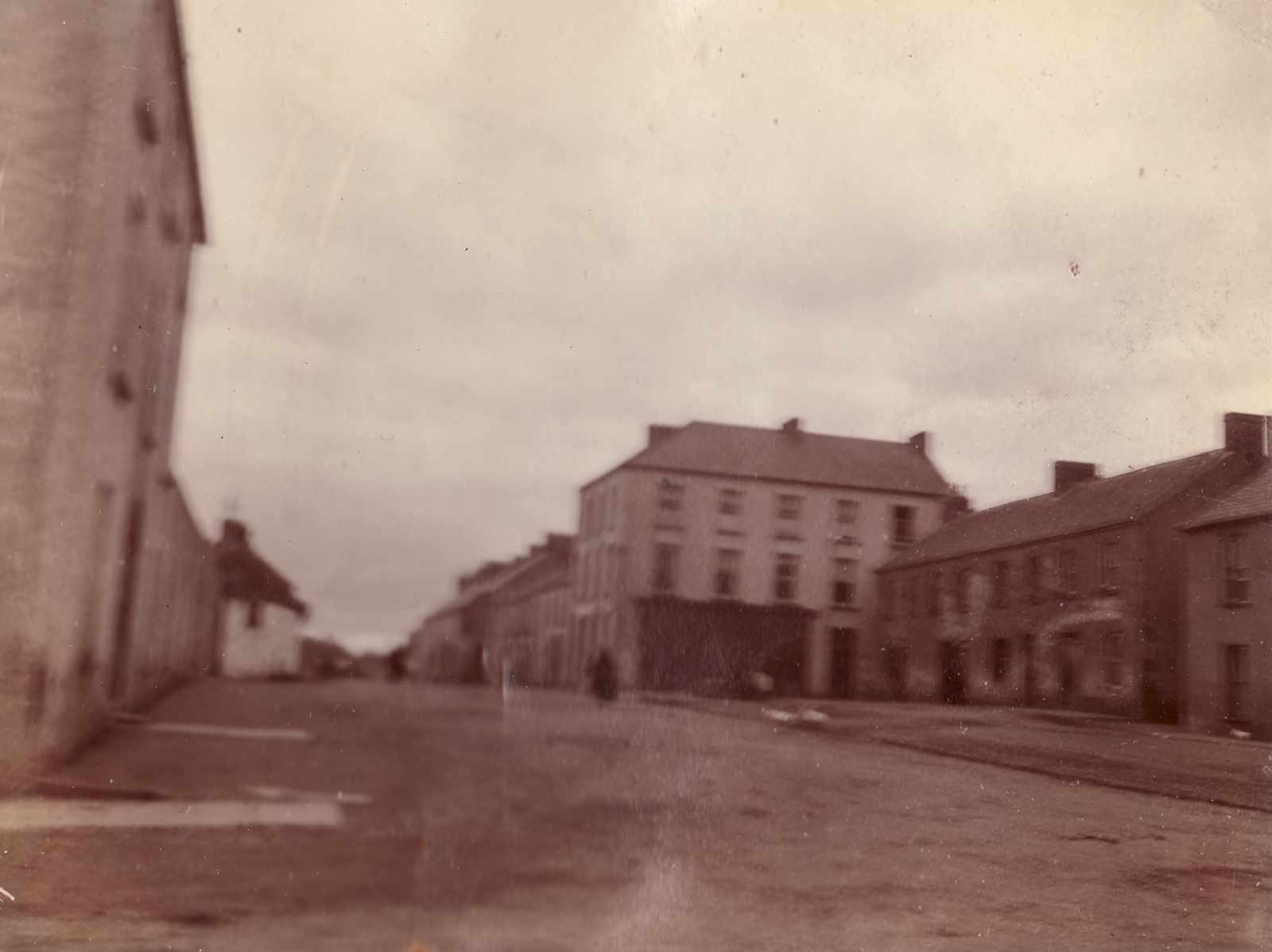 An ad in the Tralee Chronicle, 27 Feb 1877.
Shows Thomas Francis at Tarbert and his brother Richard at Ballylongford. 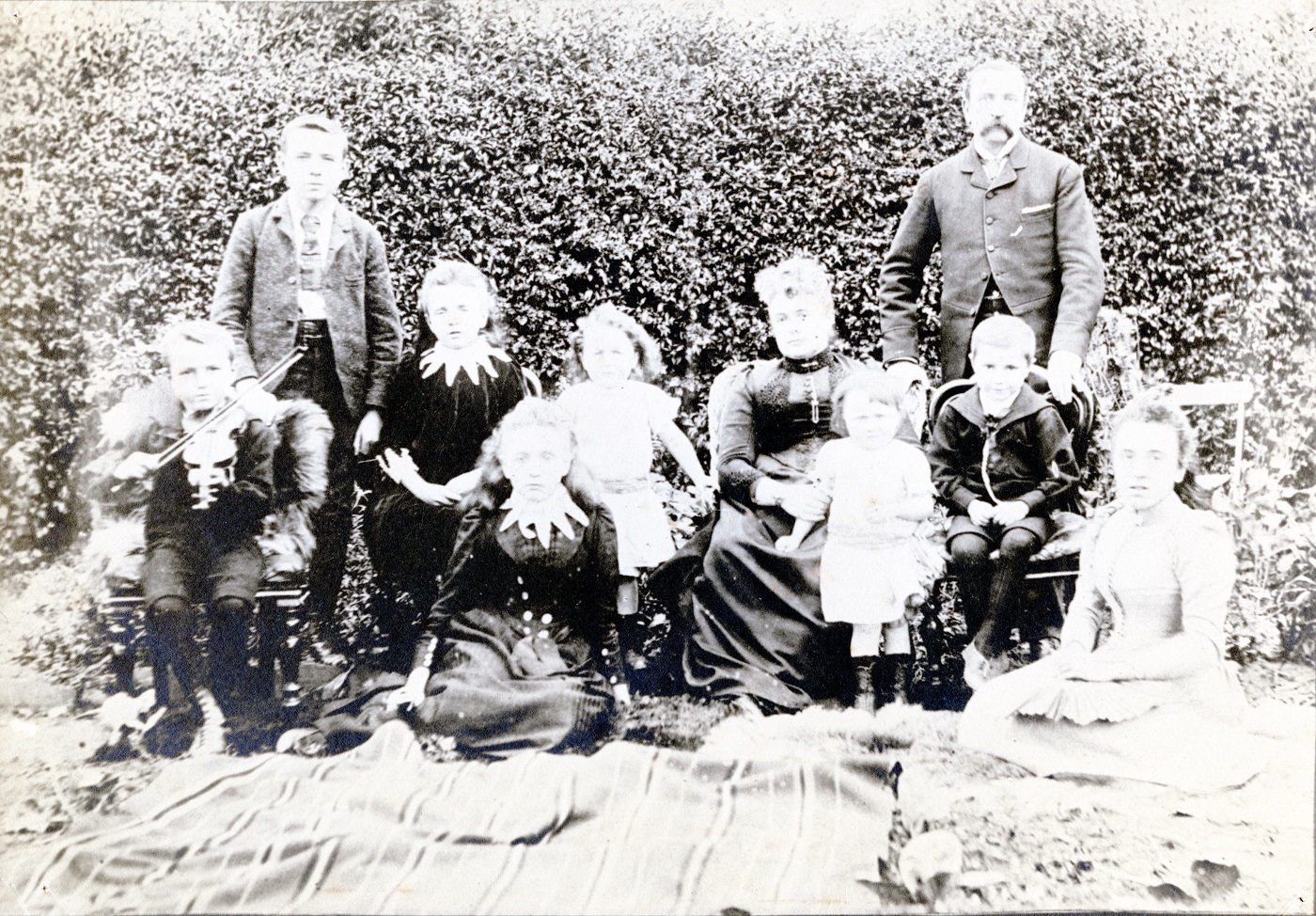 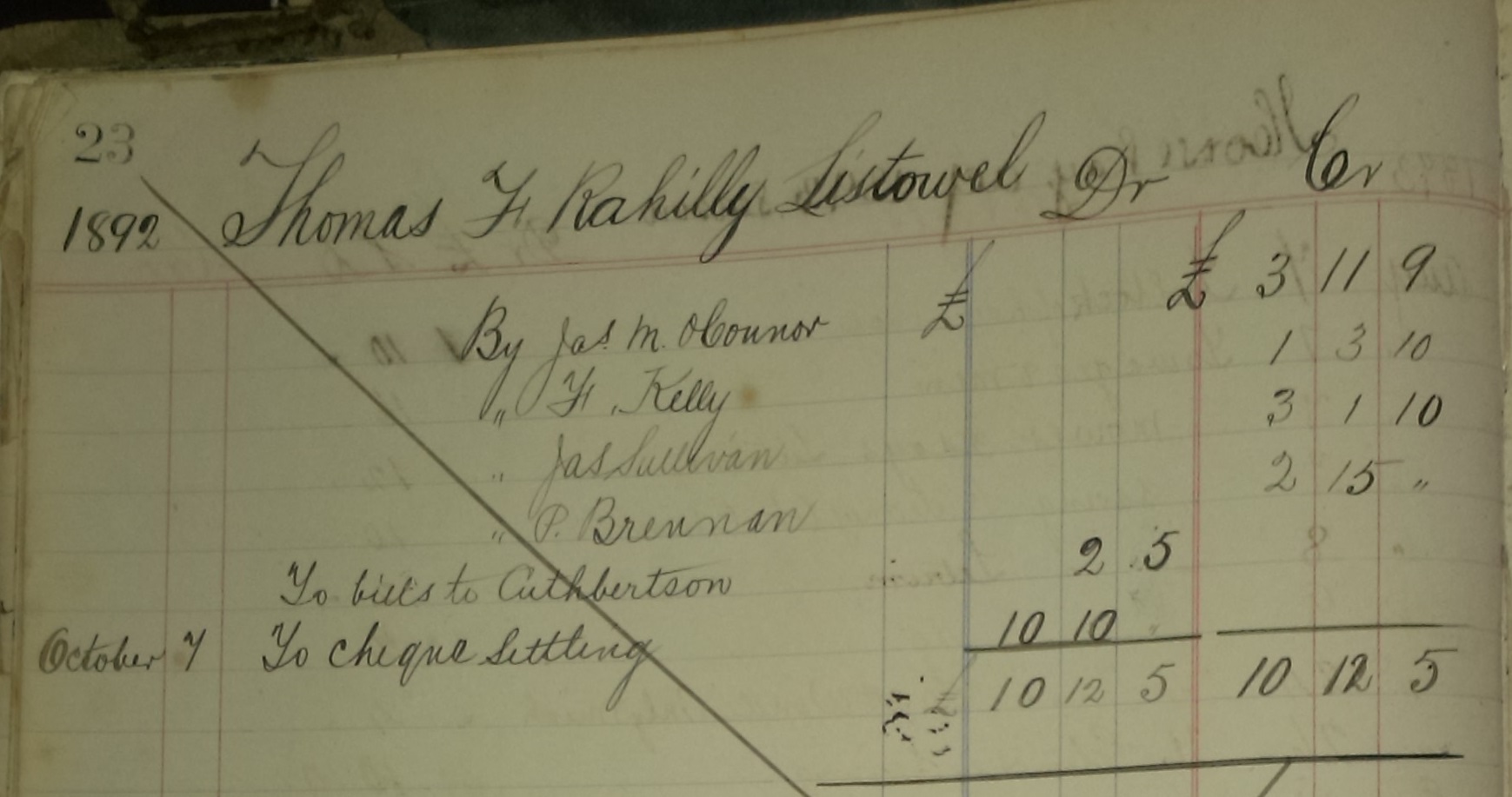 Thomas Francis Rahilly of Listowel (formerly of Tarbert) in 1892 in the ledger books of Tim O'Connor of Tarbert Island.
See larger and full page.
See other page. 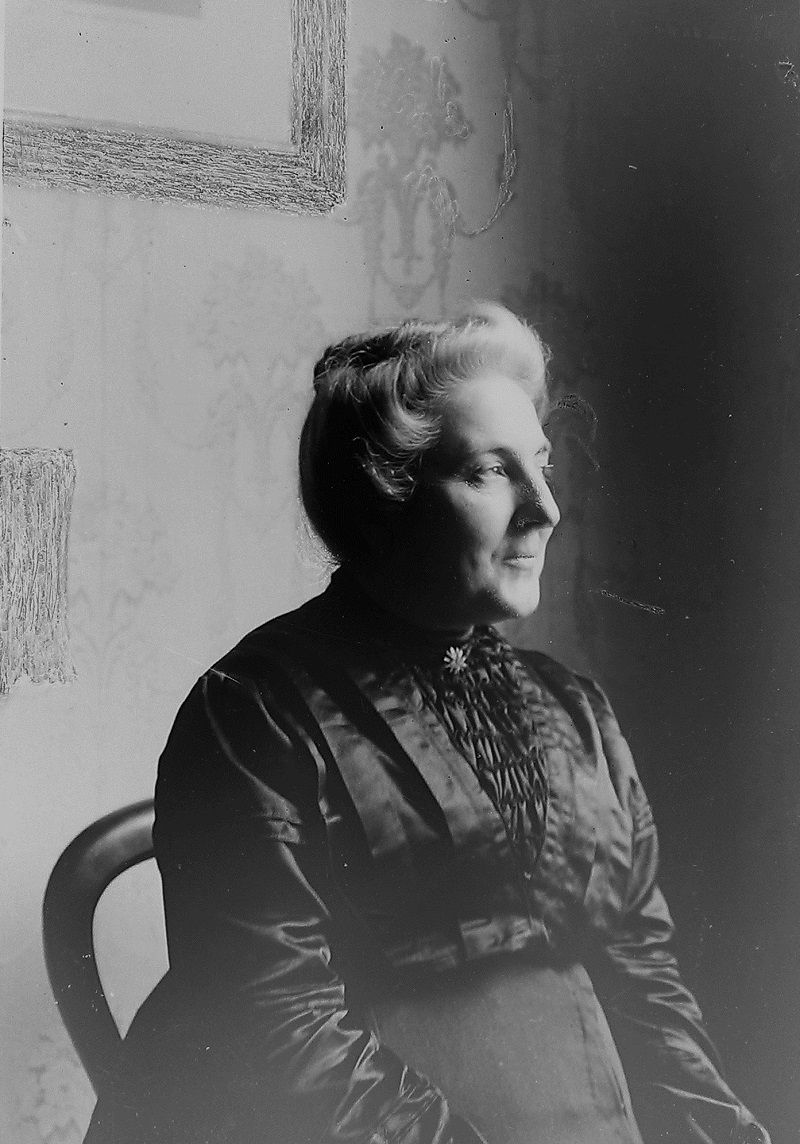 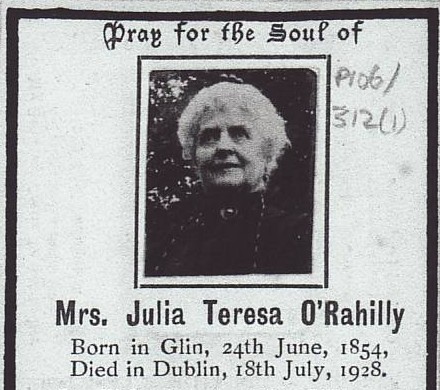 Julia O'Rahilly grave, Glasnevin Cemetery, Dublin.
Location: nH 34.5. Section: ST. BRIDGET'S. Go in gate, to left, quite a bit down, down path on right, grave is on left.

Julia O'Rahilly grave, Glasnevin.
This is also the grave of T.F. O'Rahilly.
Photo 2010. Courtesy of Peter Lyon.
See larger and full size.
See wider shot and shot from back showing location.
See close-up of top and middle and bottom. 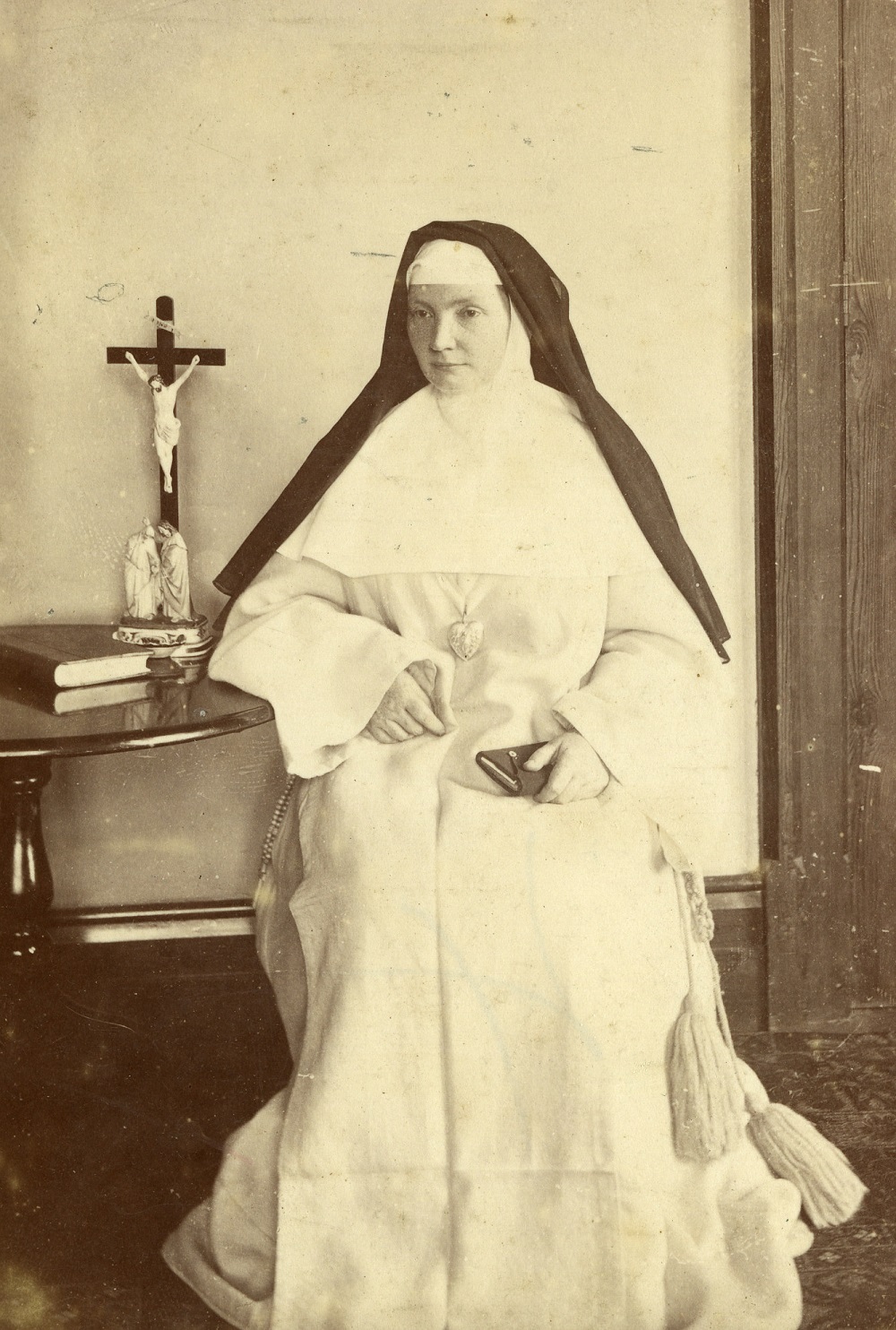 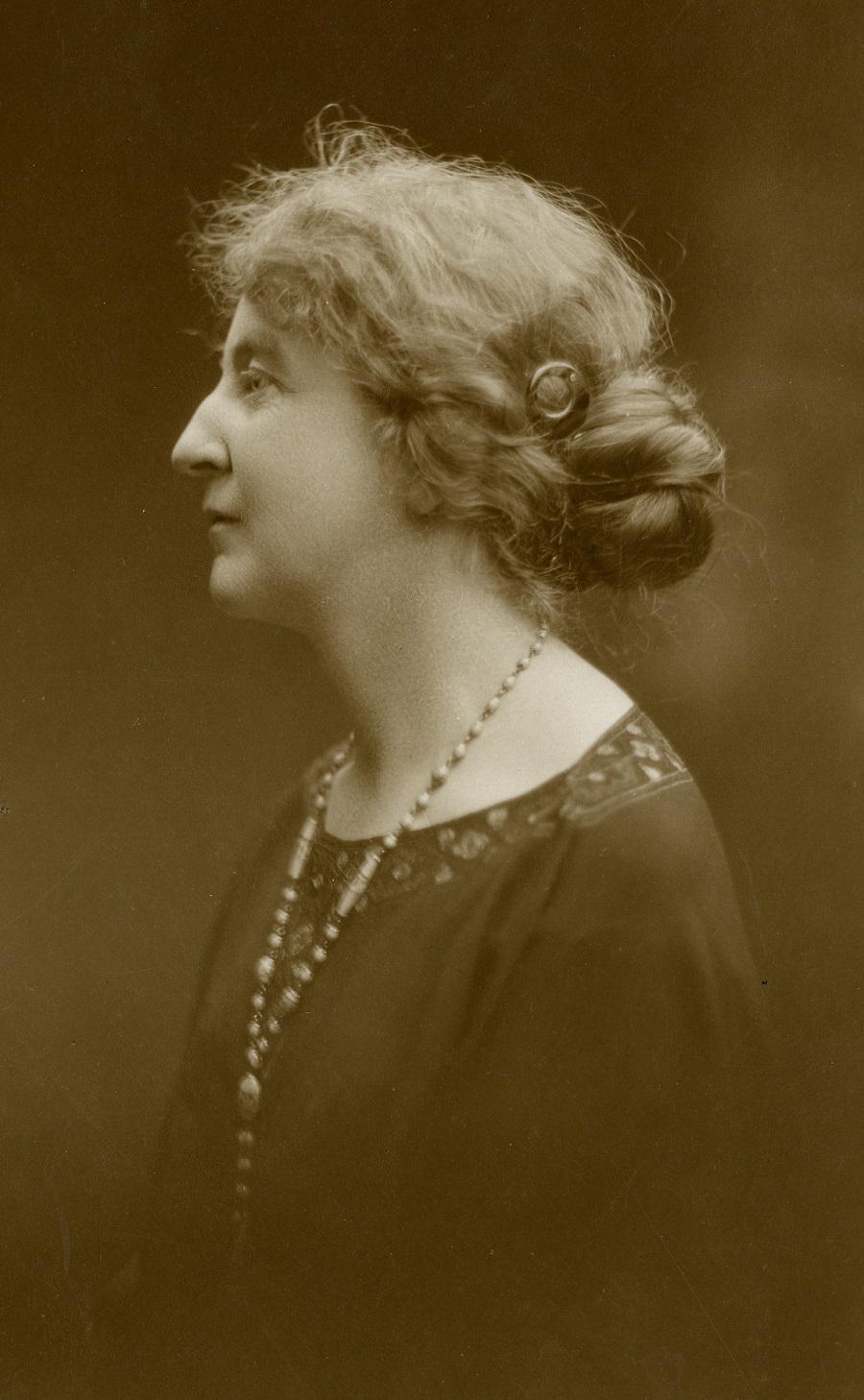 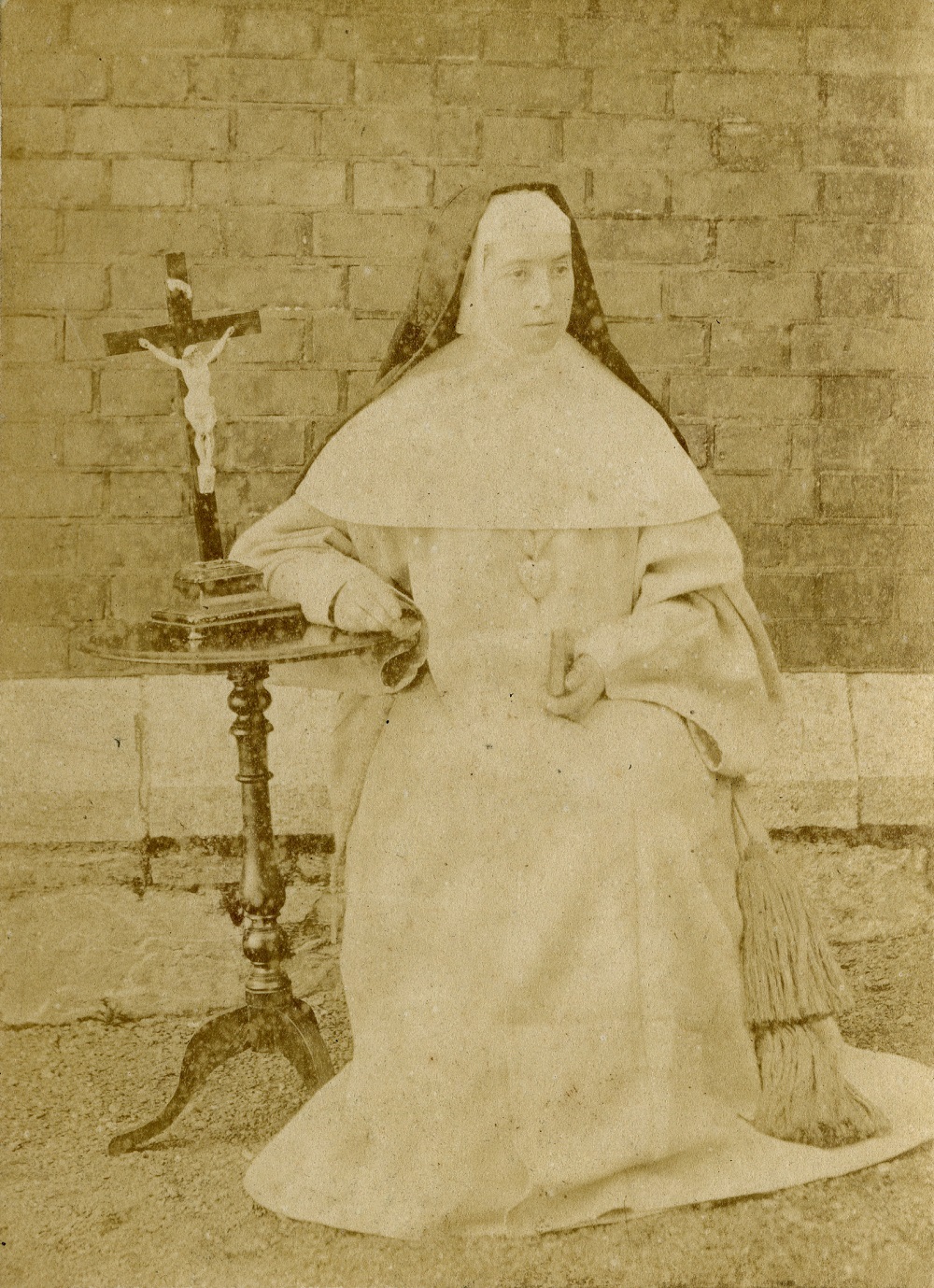