The baptism of Susan's natural child in Paris on 1 July 1819.
The baptism gives the father as "Saladin".
But it gives her surname, "Montgomery", not his.


Susan Maltass,
born est c.1774, in Smyrna, in the western (Greek) part of what is now Turkey.
Her father was an English merchant living with other Europeans in Smyrna.
She would have grown up in Smyrna.
See Turkey - Historical background.
She mar Oct 1791, Smyrna, to Augustus Montgomery (formerly Reebkomp) and had issue.

Augustus was a natural son of Henry Herbert, 10th Earl of Pembroke.
He was a Royal Navy Captain.
He served in the Mediterranean in 1790-91, and that is probably how they met.
He met her by Feb 1791. "Miss Smyrna" is mentioned in a letter by Reebkomp's father on 12 Feb 1791 [Pembroke Papers, vol.2, p.461].
He went on leave on 5 May 1791.
[1806 document] says her marriage took place in Smyrna in Oct 1791.
His will refers to a marriage settlement. Marriage was settled by his father the 10th Earl of Pembroke.

Augustus dies, 1797:
Augustus died in 1797, leaving her a young widow with two small children by him.
Augustus' half-brother, the 11th Earl of Pembroke, and later his widow, took care of her and the children financially.
Wilton papers show that the children regularly visited, or even largely grew up at, the Earl's homes, Wilton House and Pembroke House. Susan visited but did not live there.
[1806 document] indicates she is then living in London and is impoverished.
Though she goes to Wilton House for Christmas 1806.
Letter of 1882 says a pension was paid to her every year from 1807 to her death in 1851.
When her son George went to Oxford in 1813 he is listed as of "Islington", London.
Her daughter Elizabeth married in 1814.
She became a grandmother in 1815.
She went to live in Paris before 1818.
Why did she go to France? Note her mother was French.
Is it possible she went to France when she became pregnant, to escape the scandal?

The father (see discussion below) may be Auguste Henry Saladin of Paris [born 16 February 1789, descendant of Henry VII].
He was from a wealthy family. His parents were dead. He was age 29, unmarried, and he died himself in 1818, apparently in Oct 1818.
Caution that we have no evidence he is the father other than the name, but the combination of names is extremely rare, even unique.

Susan had a natural child by an unknown father, but perhaps Auguste Henry Saladin:


Susan is listed as living in Paris at son's bapt in 1819.
It is unclear how the scandal of a natural child affected her life.
Despite the scandal, her late husband's brother the 11th Earl of Pembroke left her an annuity in his will (proved 1827). See extract. From Gibbon papers.
Susan's son Rev. George Montgomery died in an accident in 1842.
She lived at 62 Rue Neuve-Saint-Augustin, Paris. There in 1850.
Her final will was made in her house, 62 Rue Neuve-Saint-Augustin, Paris, with witnesses, 12 Dec 1850. She is "widow, householder".
The will leaves all of her property to "Augustin Henry Saladin Montgomery my son residing with me". It looked a bit like "visiting" but seems to be "residing". Her son is living with her in Paris.
In her will she does not mention her daughter Elizabeth Gibbon and family. Of course they are very well off. But it is odd they are not mentioned.
[Notarial Record 1851] describes her as "rentiere" (person of independent means).

Susan dies, 1851:
She died 12 July 1851, age est c.77 yrs.
[Notarial Record 1851] says age 74 yrs but she must be slightly older.
[Notarial Record 1851] says she died at her house, 62 Rue Neuve-Saint-Augustin.
Letter of Nov 1851 says Susan died July 1851. [Notarial Record 1851] gives exact date of death. So does a letter to Arthur Augustus Gibbon on 27 Dec 1882.
Notarial Record on her death, France, 24 July 1851.
Susan's only other surviving child Elizabeth Gibbon went to Paris (with her husband). Elizabeth writes a letter of 1 Sept 1851 from rue du 29-Juillet, Paris. Her natural half-brother inherited everything by the will. Elizabeth is disputing the justice of this. She has made her complaints known to her half-brother. She does not expect a response.
Admin of Susan's estate in England, 14 July 1853, Prerogative Court of Canterbury.

Susan had a natural child born in 1818 in Paris.
The child was called Auguste Henry Saladin Montgomery (and many variants).
The proof is as follows:

Who could the father be?
We know it is a natural child. We know the child was given her surname, "Montgomery", not the father's. She clearly did not marry the father.
There are confusing clues about who the father might be and what the names mean:

By name alone there is a superb candidate for the father, that fits all the above, Auguste Henry Saladin, of Paris. If he is the father, then at the child's birth in Apr 1818, Susan is age c.44 and he is age 29. He is only 4 and 7 years older than her children.
This might explain why they did not marry. He did not want to marry an older woman.
In any case, he died himself in 1818, apparently in Oct 1818 in Switzerland.
Maybe he left Paris and went back to family in Switzerland to avoid the consequences of his affair.
Susan may have given the child his exact name in order to tie the child to him.
Caution that we have no evidence he is the father other than the name, but the combination of names is extremely rare, even unique.

Extract from [Notarial Record, France, 1851].
Says that Susan was born in Smyrna, is widow of Augustus Montgomery, and died 12 July 1851 in Paris.
See larger and full size.

This is now Rue Saint-Augustin, in the 2nd arrondissement.
It runs between Avenue de l'Opera and Rue de Richelieu. See map.

No.62 was apparently at the W end and no longer exists.
French Wikipedia says the part of the street around no.59 was removed when Avenue de l'Opera was built in 1876.
Modern street view shows that even numbers on W end of Rue Saint-Augustin only go up to about 34 before the street ends.

The natural son inherits everything

Susan's will dated 12 Dec 1850 leaves all of her property to "Augustin Henry Saladin Montgomery my son".

Extract from p.3 of letter of 28 Nov 1851 from Elizabeth Montgomery to her son.
After her mother's death, and her mother leaving everything to Elizabeth's half-brother.
Elizabeth says Lady Pembroke (widow of 11th Earl) got her to promise not to take legal action against her half-brother, and she has lost a lot of money because of this promise.
"I wrote again to [Lady Pembroke] and stated to her [the legal situation regarding Elizabeth's inheritance from Herbert] ... What will be [illegible] of this last letter I know not, but certainly I feel much mortified [illegible] to think that I, with a family, should be [illegible] as the only person who is not [illegible] to benefit by either my brother's or my mother's death, and had she not exacted an assurance that I should not institute legal proceedings against my mother's natural son, I should to a certainty have gained my cause and benefited myself and family to the extent of £3,500 at least ... [Lady Pembroke] could never have thought of all these [illegible] when she demanded so much from me".
Letter of 13 Nov 1851 confirms that it is Lady Pembroke making these demands.

Elizabeth Montgomery discusses the case against her half-brother in an undated letter.
She refers to him as "Mr. Henry Saladin".
She says: "my brother never lived to come into possession of his proportion of what my mother enjoyed". (Her brother George died before her mother Susan.)
See full size. 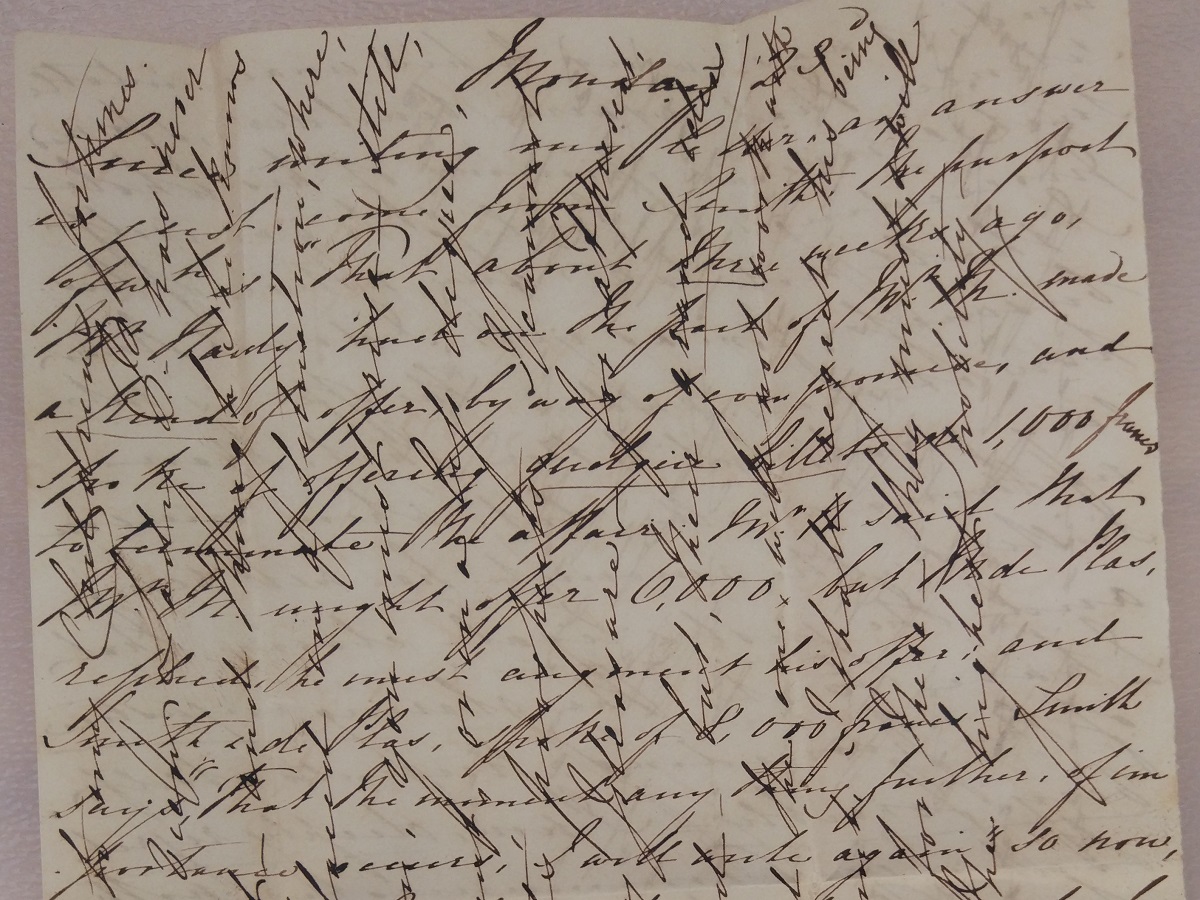 Settlement of dispute:
Undated letter from Elizabeth Montgomery to her son Arthur Augustus Gibbon.
It indicates an offer has been made "to terminate the affair". Elizabeth now calls him "Mr. M." She refers to him as "the natural child".
See p.1 and p.2.