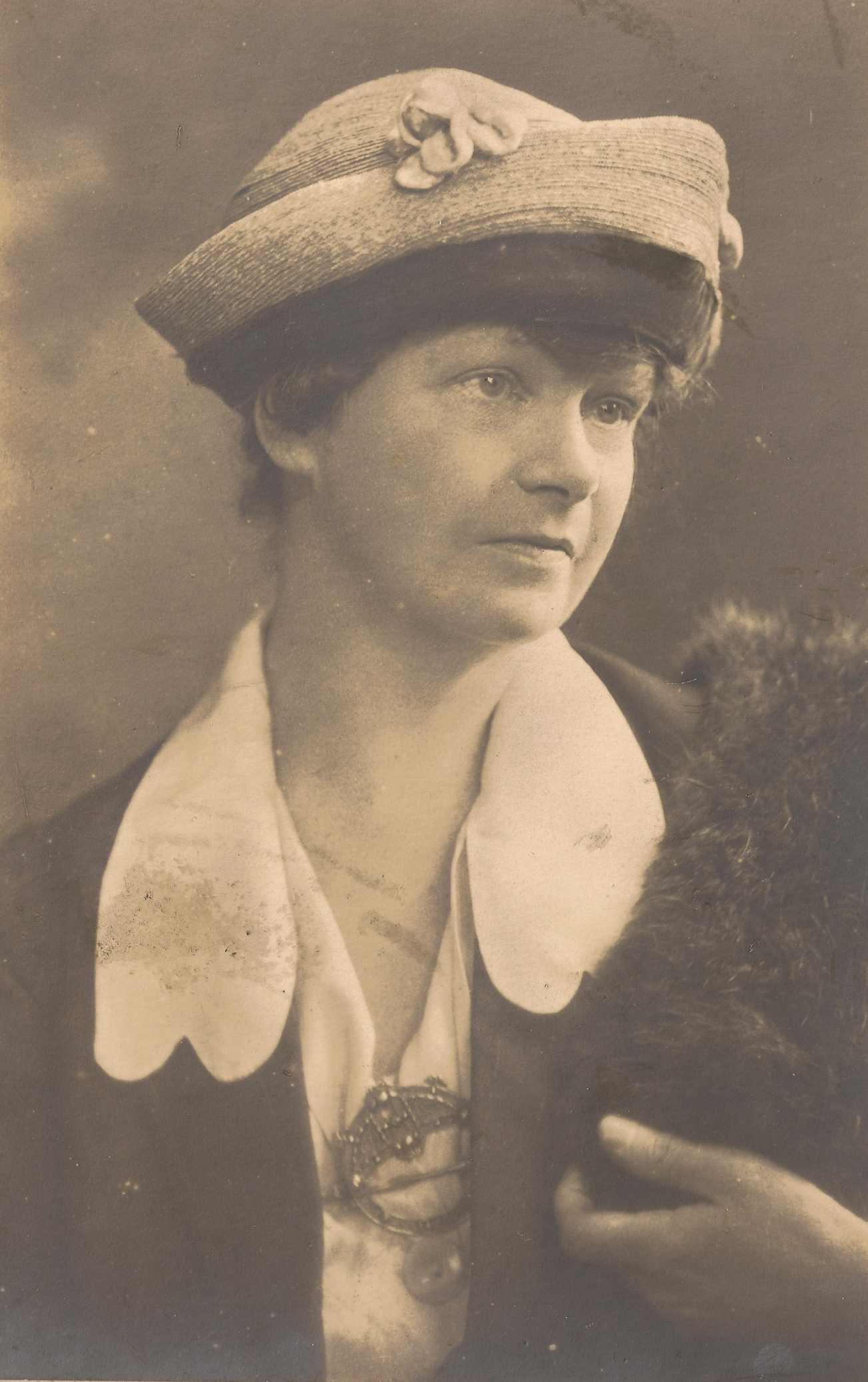 Gaelic League and republicanism:
She became a member of the Gaelic League (founded 1893).
Her obituary says she was "a founder member of the Gaelic League" but that seems highly unlikely (she was age 15 in 1893).
She was a supporter of Sinn Fein as early as her brother-in-law James O'Mara, around 1907 [Lavelle, 1961].
Living with her father in Cork in 1911 census, she is at "teacher training college", speaks Irish (only one in family listed as speaking Irish).
"Miss Cashel" (Alice) was on Cork Municipal School of Commerce staff, 1911-1912.
Terence MacSwiney was also on the staff. Alice and her sister Kathleen became great friends with his family, the Cork republican family, the MacSwiney's. This family may be relations of their stepmother Marion McSwiney.
Alice was an early member of Cumann na mBan (founded 1914). She set up the Cork branch of Cumann na mBan with Annie MacSwiney about 1914-15. She became secretary of the branch.
In 1916 she was living in Limerick.
She took part in plans for the 1916 Rising in Co.Cork, but the plans were aborted. Letter of 17 March 1954 recalls that she was in Ballingeary, Co.Cork, with Sean O'Hegarty during Easter Week 1916.
She went to America in Aug 1916 and made contact with John Devoy. Returned to Ireland in Jan 1917.
She went in 1917 to teach in Mary MacSwiney's school, St. Ita's School for girls, Cork.
In Jan 1918 she was living at her sister's Galway house, Barfield.
Her brother-in-law, Sinn Feiner James O'Mara, paid for her to go help in the South Armagh by-election of 2 Feb 1918.

Cumann na mBan organiser:
She was appointed a full-time organiser of Cumann na mBan in Feb 1918.
She organised for Cumann na mBan in Co.Donegal in early 1918. The development of Cumann na mBan in the county dates from her 1918 visit.
She campaigned for Arthur Griffith of Sinn Fein (in jail at the time) in East Cavan by-election June 1918 (in which Griffith was elected).
On 15 Aug 1918 (incorrectly written in [BMH] as 1919) she held a banned meeting at Clifden, Co.Galway, which was broken up by the police. In [BMH] she says: "Orders had been sent from Sinn Fein H.Q. that on the 15th August a manifesto should be read in public by every Sinn Fein club in the country. On the morning of the meeting I was informed by one of the local R.I.C. that if I held the meeting I should be arrested. We held the meeting near the square, it was broken up by the police, the platform planks on barrels being pulled from under our feet. We stayed on until the last plank was taken. Then I reorganised the women in the street and marched them out of the town and held my meeting on the monument base which stands on a hill outside Clifden. While the police followed me the Secretary of the Sinn Fein club finished the reading of the Manifesto. I then had to ?go on the run.?" She spent much time "on the run" in various safe houses in Co.Galway and Co.Mayo.
Her brother-in-law James O'Mara became a member of the first Dail Eireann in Jan 1919.

She worked for the Republican side in the Civil War, but does not detail this in [BMH].
She never married.
She worked for a time in the Revenue Department, Dublin Castle.
She lectured in UCG, possibly taught a subject on the H.Dip. course.
See her argument with Jim Sullivan about the Blennerhassetts, sometime before 1935.
She wrote novels. Author of:

In later life she lived St.Catherine's, Roundstone, Connemara, Co.Galway. Think she was there c.1940. Definitely there in 1950.
See Letter of 12 April 1950 from the Bureau of Military History to her, thanking her for her statement. Addressed to St Catherine's, Roundstone.
See Letter of 17 March 1954 from her. Sent from Roundstone.
Her nephew Steen O'Mara (who didn't marry) stayed with her a lot (according to Muffie de Courcy).
Living Roundstone at death.
She died 22 Feb 1958, Regional Hospital, Galway, age 79 yrs [GROI].
See mass card.
See obituary in Irish Press, February 24, 1958.
See obituary in Irish Times, February 24, 1958.
Funeral 25 Feb, buried in the New Cemetery, Bohermore, Galway.
The Taoiseach and President sent representatives to the funeral. The Mayor of Galway attended. The Cathaoirleach of the Seanad Liam O Buachalla gave an oration. See report in Irish Press, February 26, 1958.
See report in Connacht Tribune, March 1, 1958.

Close-up of "Miss Cashel" and Terence MacSwiney.
Printed in an unknown later newspaper. This gives the names.
See full size. See other shot.
See another copy. 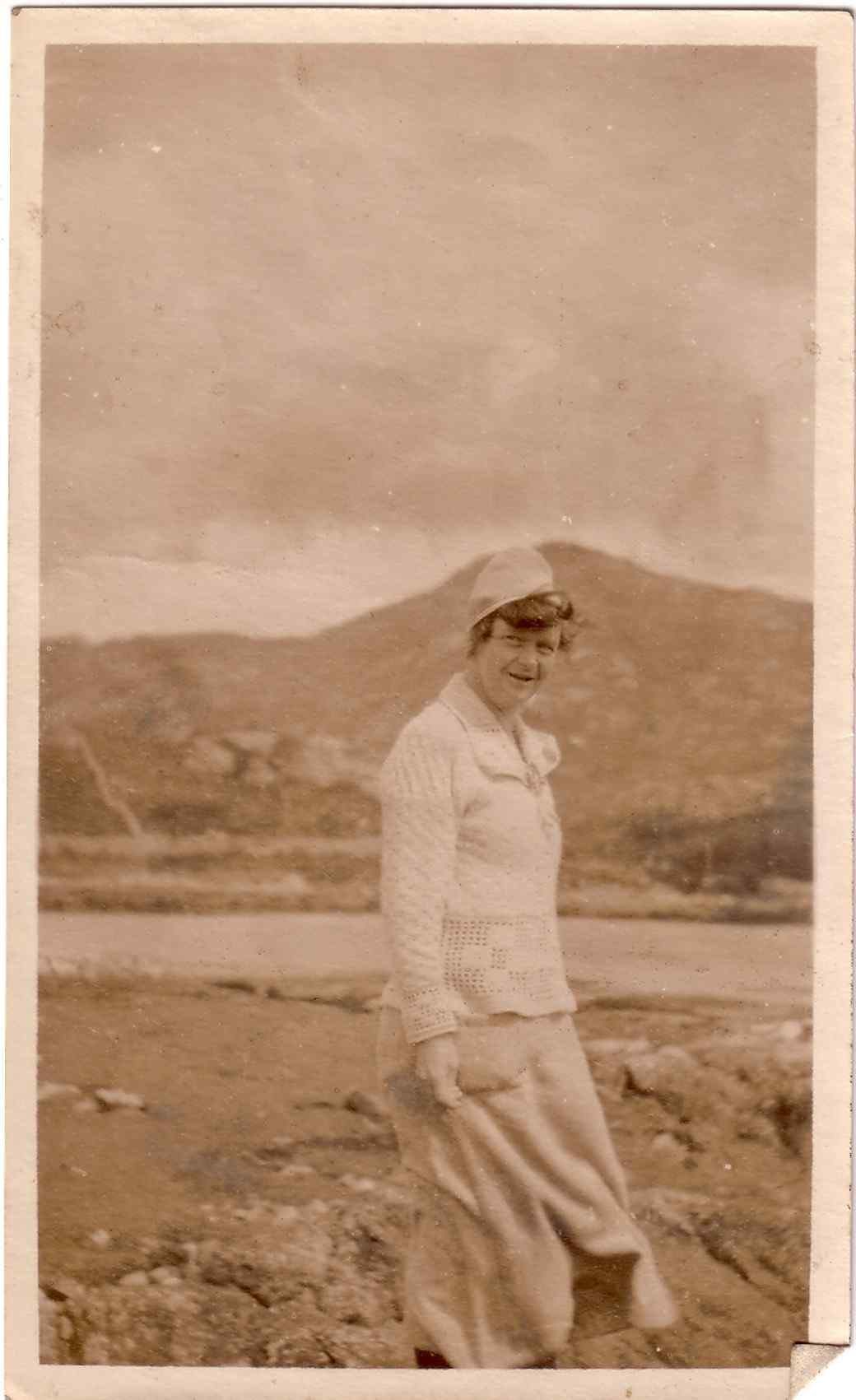 St.Catherine's, Roundstone, Connemara, Co.Galway (see map).
Home of Alice Cashel.
Think she was there c.1940. She was definitely there in 1950.
She was living there at death 1958.

The house is on the main N-S road in Roundstone village, in the middle of a small block on the W side of the road.

The house today (middle house of block).
The roof is re-built. The neighbouring buildings are re-built. The door and lower windows are similar. The wall is similar.
2009 screenshot from street view.

The lights of Leaca Bán

Alice lived for a time at her sister's grand house, Cashel House, Cashel, Connemara, Co.Galway.
A June 1920 report (above) says that Alice "resides at Cashel with her sister".
[BMH] is clear that she is living at Cashel House in this period.